Our Favorite Caribbean Ports of Call

Not all Caribbean ports of call are alike. On the surface, most of them resemble each other, from the chi-chi tourist shops to the expensive restaurants to the noisy street vendors. Dig beneath the surface, though, and you’ll find that many ports of call are a door to adventure, either right there in the port city or just a stone’s throw away from town. Here are some of our favorite ports of call. 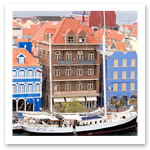 Ships dock at Willemstad, at the terminal just beyond the Queen Emma Bridge, and the walk to downtown Willemstad is less than 10 minutes. You needn’t spend more than two or three hours wandering around here, although the narrow alleys and various architectural styles are utterly enchanting.

Best Bet in Town: If history is your thing, exhibits at the Kura Hulanda Museum, in Willemstad, delve deep into Caribbean history and the slave trade. Displays include a full-size reconstruction of a slave ships’ hold and first-hand accounts of the slave-trade.

For a Taste of Adventure: After Bonaire, Curaçao has probably the best diving in the region. Sunset Divers offers daily one- and two-tank dives, 24-hour shore diving, and custom dives. Wanna bike the island? Wanna Bike Curacao can get you onto a bike and off to see the Caracas Bay Peninsula and the salt ponds at the Jan Thiel Lagoon.

For Beach Bums: Curaçao doesn’t have an abundance of long, powdery stretches of sand, but there is Cas Abous, a white-sand gem. There’s an onsite dive shop, a snack bar, and the restrooms and showers are immaculate.

From the Forums: “You can spend a number of days in the Curacao Seaquarium, the Christoffel National Park, or on one of the island’s many beaches. Because of its diverse culture, there are so many restaurants and foods to choose from that will fit your plans and appeal to your taste buds.” — Knowing (more) 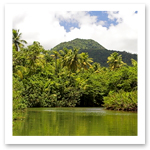 Rugged and wild, Dominica’s dense rain forest and numerous waterfalls lure hikers, bikers, bird watchers and nature freaks from all corners of the globe. The island is an adventure traveler’s paradise, with plenty of opportunities for rivertubing, ziplining, and snorkeling.

Best Bet in Town In the port city of Roseau, the 40-acre Botanical Gardens is a great place to relax. It’s tropical plants galore here, and there’s also a parrot aviary. Between Bath Road and Valley Road. 767/448-2401, ext. 3417.

For a Taste of Adventure: Dominica has some of the Caribbean’s best undeveloped rain forests, and they’re a hiker’s paradise. The Rainforest Aerial Tram offers terrific views of a pristine rain forest aboard an open, eight-person gondola. For real adventurers, there’s nothing like a trek through the Morne Trois Pitons National Park to see majestic waterfalls and a boiling lake.

For Beach Bums: Seek out the cleverly named Champagne Beach, on the West Coast. More stone than sand, it’s one of the island’s best spots for snorkeling. (The charmed name is because of the volcanic vents that puff steam into the sea, the result being a feeling that you are swimming in a sea of warm champagne!)

From the Forums: “I would pick Dominica over Grenada. Yes, Grenada has a lot of beaches, but the snorkeling in Dominica is unbelievable! We have never seen such clear water.” — flycatcher06 (more) 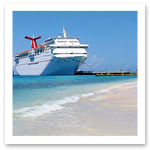 In Turks & Caicos, ships dock at the elaborate Grand Turk Cruise Center, which has its own beach facilities, shops, and a huge pool. Many passengers find it so appealing they are tempted to stay put in the port city of Cockburn Town. If you do, you’ll miss the charm of this serene and unspoiled island.

Best Bet in Town: Vsit the Turks & Caicos National Museum, in Cockburn Town. Among other exhibits here you’ll find the Molasses Reef wreck, the earliest shipwreck — dating to the early 1500s — discovered in the Americas.

For a Taste of Adventure: See-Eye Diving offers encounters with friendly stingrays on a popular snorkeling trip to nearby Gibbs Cay. Or see the island up close on a 4 x 4 Land Excursion that takes you to some of the off-the-beaten-track places on the north part of the island. (Most cruise lines offer these trips; ask your cruise director for additional information.)

For Beach Bums: Check out the calm waters off Governor’s Beach, which are ideal for wading or snorkeling. The beach is close to the Cruise Ship Center, so it’s easily reached on foot, though it can be crowded when a ship is in port. For more of a beachcombing experience, head to Little Bluff Point Beach, west of the Grand Turk Lighthouse.

From the Forums: “Diving was absolutely incredible, and the famous ‘wall’ is easily reached from the shore. This is a new cruise destination and there really isn’t a whole lot of infrastructure there yet.” — suzski (more) 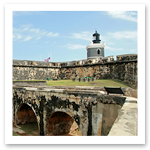 Within a seven-square-block area in Old San Juan are restored 16th-century buildings, museums, art galleries, bookstores, and 200-year-old houses sitting on cobblestone streets. In contrast, San Juan’s sophisticated Condado and Isla Verde areas have glittering hotels and casinos and fancy boutiques. You can also get away from it all on dramatic mountain ranges, trails, caves, and coffee plantations. No wonder this is the most popular port city in the Caribbean.

Best Bet in Town: At Casa Bacardi you can tour one of the world’s largest distilleries and even get a free sample of Puerto Rico’s favorite spirit. If rum is really your thing, avoid driving here; take the ferry instead — pick it up at Pier 2 (50 cents each way). A public car can take you from the ferry dock to the factory for about $2 or $3 per person.

For a Taste of Adventure On a rocky promontory at the Old City’s northwestern tip is El Morro, a defensive fort built centuries ago by the Spaniards. The fort is a maze of fascinating barracks, towers, and tunnels.

For Beach Bums: Thankfully, PR’s beaches are open to the public at large. Balneario de Carolina has lots of trees for shade, but it’s so close to the airport the leaves rustle when planes take off. Playa del Condado is quieter, but it’s overshadowed by an unbroken string of hotels and apartment buildings. At either one you’ll find plenty of bars, water-sports outfitters, and chair-rental places.

From the Forums: “We will be picking up a cruise on the Adventurer of the Seas leaving SJ on 14th October returning 21st Oct. Please let me have your thoughts for getting to, boarding, disembarking on arrival back in SJ and transferring to the Airport.” — Clonard (more)