Coronavirus David Silverberg Are Your Kids Heading Back to Summer Camp? Here's What You Need to Know
Home  >  News   >   Best Travel Gadgets of 2012 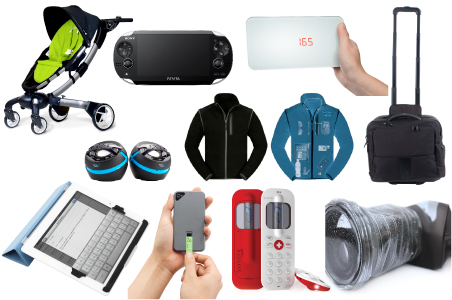 As 2012 comes to a close, it’s time to look back at this year in travel technology. Sure, there were hundreds of helpful gadgets we (dis)covered, but it’s hard not to play favorites. The ones that quickly sprang to mind happened to fall into ten travel-minded categories. They each demonstrate just the right blend of technological advancement, ease of use, and value to a wide breadth of travelers. So without further adieu, here are our favorite travel-friendly devices from this year.

Favorite: Since its launch in February, the PlayStation Vita has continually wowed us with fun titles that take advantage of the handheld’s cool graphics, sensors, and cameras. We like the cross-platform play of MLB 12 The Show, the entertainingly intellectual Smart As, and the retro arcade revamp Spy Hunter. As you might guess, we’re drawn to the travel-themed I am an Air Traffic Controller Airport Hero Haneda. Plus, we also love the device’s ability to pump out music and stream videos.

Runner-up: Sphero, the attention-grabbing, app-driven, remote-control robotic ball, has all sorts of fun applications. Some turn the tables and use Sphero as the controller for an app on their phone or tablet. And one of the newest games, Sharky the Beaver, incorporates augmented reality. Very cool!

Favorite: SpareOne, the only mobile phone capable of traveling worldwide and lasting up to 15 years on a single AA battery, launched earlier this year and just recently won a prestigious Innovations Award from the Consumer Electronics Association. In addition to being useful both on-the-go or stored in your vacation home, it’s also a great resource to have in emergencies—partially for that battery life, but also for its built-in flashlight and dedicated 911 dial button.

Runner-up: The new MiFi Librate, currently available exclusively on AT&T (for $200 before contract), is the first mobile hotspot with an interactive touchscreen. It offers 4G LTE speeds, can webify up to 10 users, and sports an SD card slot for easy inter-device file and media sharing.

Favorite: As we wrote a few months ago, the protective and memory-infused Ego USB Hybrid Case is available for both iPhone 4/4S and the Samsung Galaxy SIII. But now, this dual-utility case series is also offered for the iPhone 5. Additionally, Ego has updated their site. The bad news: The links from our original story are dead ends. The good news: These links above work fine, and this version of the site is easier to use, especially when buying one (or more) of these cases.

Runner-up: The Lifeproof nüüd shirks shocks, snow, dirt, and water, as it gives total access to all the tablet’s buttons and functionality. However, it does so without a separate screen protector! So even though it’s fully sealed, you can still touch, pinch and zoom right on your iPad’s actual display.

4. Power to the People

Favorite: It’s hard to beat the concept of a bag that not only holds your devices, but charges them as you go. Well, in addition to the slick rolling office bag we wrote about earlier this year, Powerbag also offers a Business Class Pack. It doesn’t have wheels, but will have you rolling through security, with a flat-folding, checkpoint-friendly design. As you’re juicing your camera, phone, and tablet, why take out your up-to-15-inch laptop if you don’t have to?

Runners-up: Satechi Portable Energy Station offers the highest capacity battery we’ve seen in a relatively small package. It’s a little thinner and longer than a smartphone, but can recharge a phone five or six times over. By comparison, the sturdy, light and powerful new Gomadic SunVolt doesn’t employ a battery. It just uses the sun to power up multiple devices at similar speeds to a wall charger.

Favorite: The folks at ScottEVest really outstripped themselves with the release of their Fleece 7.0. Among its best features are removable sleeves (and a secret compartment to store them); a patent-pending plastic-covered inside pocket that allows you to see and touch your phone’s screen and give it voice commands; and a dedicated iPad pocket that can vanish the tablet into thin air. A host of other features include relentless attention to design detail, nice materials, and tons of use-minded pockets.

Runner-up: Modpod clogs are a fun blend of funky and practical. Their knobby outsoles look kind of like a series of rocket thrusters. Yet they’re easy to slip on and off through security. And the soft, stretchy fabric uppers have plenty of give, a godsend considering the inevitability of in-flight foot swelling.

Favorite: Without question, TouchFire is the smallest, thinnest, and lightest physical travel keyboard out there. Better yet, it doesn’t require any power. It just lays over the iPad’s on-screen keyboard and allows you to touch-type. It’s designed well, works well, and elegantly solves a problem causes (relative) suffering among the masses.

Runner-up: Since we wrote about the Breffo Spiderpodium in April, this handy accessory has an updated link to its site, but is basically still the same simple yet effective, super-bendy stand. No batteries, no buttons—it just does what it does well.

Favorite: For folks who want to measure their luggage or themselves as they travel, the Portable Body Scale is the only (ahem) weigh to go. It’s digital, easy to use, and can very quickly cure your curiosity. After all, the last thing you need is your extra baggage weighing heavily on your conscious.

Runner-up: Ideally, every day of every trip (and even at home), the Philips Sonicare DiamondClean proves its mettle. What’s ironic about this toothbrush that’s rechargeable several different ways is that even with daily cleanings, it can go two or three weeks between charges. So you may not even need to pack a charger after all!

Favorite: Soon after our compact speaker piece ran back in March, the cute little Mighty Dwarf resonance speaker got even mightier. The BlueII—a Bluetooth version that’s a little bigger and twice as powerful as its tiny cylindrical predecessor—sends impressive bass into whatever surface it’s on and releases the higher tones upward into the air, for a great blended sound wherever you go.

Runner-up: Cool, clear, compact, and classy, the B&W P3 headphones are especially great for acoustic, classical, and live music. But they’re definitely deft at producing dulcet tones in any genre.

Favorite: After all the time you took to shop around for just the right lens, it makes sense that you’d want to protect it with the Aquapac SLR camera case. After all, why should you be restricted about where you take pictures? So go ahead and take that big, bulky, background de-focusing rig of yours aboard boats, into the rain, and under waterfalls.

Runner-up: Two big changes to the 360-degree video shooting Kogeto Dot accessory are that it works with iPhone 5, and now you can use your phone’s volume rocker to start and stop recording. (Our big complaint used to be having to finagle a screen tap while gingerly holding the device level to the ground.)

Favorite: Technology that makes travel easier for anyone is good. But when it’s parents who benefit, it’s simply fabulous! With that in mind, the 4moms Breeze is indispensible. With the touch of a button it folds down. The twist of a wrist pops it back up. If only they could come up with similar technology that could just as quickly putting wired kids to sleep…

Runner-up: We’re still impressed at how fun and educational the Tropisounds Emma digital book-puzzle is. Not to mention the way that it works travel and technology into the story.

Award-winning Fodors.com Travel Technology Columnist Scott Tharler is an expert in gadgets, gambling, and travel. He’s written four books, hundreds of mobile and wireless tips, and dozens of freelance articles. In addition to his Discovery News gadget blog contributions, you can find links to other gadget articles, social feeds and lists of his current favorite gadgets at about.me/gadgetfans.