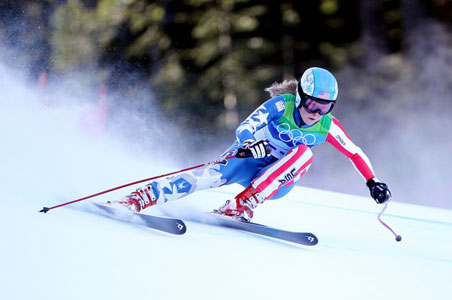 A ten year veteran of the US Ski Team, Kaylin Richardson is a four-time National Alpine Champion and two-time Olympian. Since retiring from the World Cup in 2010, Kaylin has been exploring different avenues of the skiing spectrum. As Ambassador of Skiing at Canyons Resort in Park City, Utah she fell in love with the backcountry of the Wasatch Range and decided that the big mountain scene was her new home. This past season Kaylin made her film debut appearing in Warren Miller’s 63rd film, "Flow State," and won the Freeskiing World Tour’s North American Championship in Snowbird.  Kaylin is the happy to admit that the mountains are her playground as well as her office.   Her life philosophy is "laugh often" and she plans to do so—all the way down the mountain until the end of her days.

This is hands down the best place to ski in the Southern Hemisphere, if you are one that gets the ache for skiing come June and July. Located just 50 kilometers (31 mi) northeast of the Chilean capital of Santiago, La Parva is one of the most exclusive and accessible ski resorts in Chile. From the side of the 3,888 meter La Falsa Parva, you are met with a unique and picturesque mountain village surrounded by endless views of untouched landscapes in one direction and a birds eye view of Santiago below. Every day makes for epic sunsets. One of the largest draws is the people. Chileans have a passion for the mountains and a playful spirit that is contagious.

Creature Comforts: The Condominium Nueva Parva provides a comfortable, ski in/ski out accommodation with 6-8 person apartments, all with a terrace, wide living/dining room, fully equipped kitchenette, and easy access to a large heated swimming pool. It is the perfect home base for an epic mountain adventure.

Serious Skiing: La Parva offers an extensive variety of terrain, from beginner slopes to more advanced, but if you an expert skier with backcountry knowledge and are up for a real challenge, check out the world famous La Chimenea, a narrow, 1,000′ vertical chute just a short hike from the resort’s boundaries. If that doesn’t provide enough thrills, try McConkey’s chute, named after the late and great Shane McConkey, just next to La Chimenea.

Cheesy Goodness: Don’t miss the fondue at La Marmita at the base of La Parva, right across the way from my favorite après-ski spot, Saint Tropez. The intimate ambience and decadent food make for memorable evening. And if one glass of wine turns into many, stick around and you might be rewarded with some lively karaoke action!

Perfect Timing: With overnight flights from North America arriving between 7 am-10 am, it’s easy to be skiing the same day you arrive. And return flights typically take off in the afternoon or evening, allowing you to ski more days if your schedule is tight. 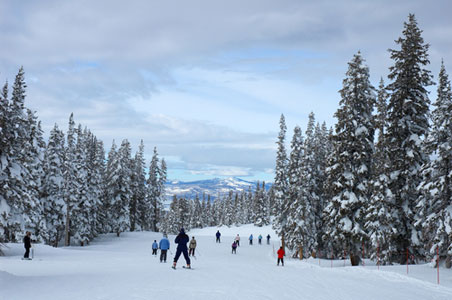 Many Resorts over the years have tried to recreate that old western feel, but they fall short and it comes off inauthentic. Not Steamboat. It is the real deal. I mean, ski celebrity, Billy Kidd is their Director of Skiing! On Mt. Werner, home of Steamboat Ski Resort, it is encouraged, if not mandatory, to ski in a cowboy hat come springtime. The vibrant town embraces all things ski. When their trademarked "champagne powder" is abundant I head straight to Storm Peak North and South. Once that is tracked out, it is either a trip to Christmas Tree Bowl or the trees off Pony Express. Truth be told my best friend, Olympian Caroline Lalive, has showed me parts of this mountain that I could not explain even if I tried. There are so many little spots to discover. Who knows, you might find your own personal powder stash.

Celebrate Snow: The Steamboat Springs Winter Carnival does just that. With its 100th Anniversary this February, the entire town partakes in the pageantry. Think shovel races and horse joring. Plus the legendary Light Man is the highlight to the Saturday Night Show with a fiery demonstration from members of the Steamboat Springs Winter Sports Club, culminating with one of the largest winter fireworks shows in the state.

Clothing Optional: After dark, anyway. Six-miles outside of town lies a hidden gem, the Strawberry Park Hot Springs. They managed to maintain the natural surroundings while making it accessible to everyone so that you honestly feel like you stumbled across it on your own. I highly recommend it after a long day of skiing and I was not kidding, once night falls it can get more, shall we say, "colorful," but that adds to the fun and it remains peaceful no matter what. 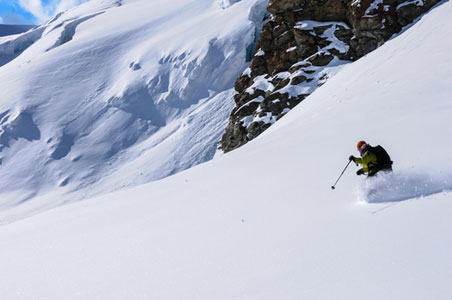 I skied on the World Cup circuit for seven years and my favorite annual European stop was always Cortina d’Ampezzo. Located in the Veneto region of Northern Italy, Cortina sits in the heart of the Dolomites. From the floor of the Ampezzana Valley, the peaks of the Dolomites jaggedly shoot up before you, dramatically encircling the village. With a handful of different ski areas to sample, you will never tire of the terrain and will be constantly reminded of their majesty. Ask to be pointed in the direction of the World Cup downhill course and gird your loins before straight-lining down the Tofana Schuss—a seriously steep and narrow section of the venue that runs between two towering monoliths. For about three seconds you will know what it feels like to be an elite ski racer.

Local Secret: My dear friend and Cortina native, Carlo Salmini of Shred Optics/Slytech Protection let me in on a little secret: Italians are lazy in the morning so ski early to enjoy the beauty and the silence of the mountains as well as the empty trails. Then find a nice spot to enjoy the sunset when the Dolomites turn to pink, providing one of the most amazing mountain sunsets you will ever experience. The best spot is from the top of Cristallo Mountain.

Translator and… Pizza: Ristorante Pizzeria Cinque Torri is owned by Francesco Ghedina, a podium finisher at NCAA Championships for the Denver University Pioneers. He speaks perfect English and will happily give advice and answer questions as you devour some amazing food. Delicious pizza and insider info in one sitting.

The Real Italy: El Brite de Larieto is not exactly a restaurant, it is an agriturismo, which which means it is certified to provide most of its ingredients from their own crops and livestock. The Gaspari cooks special, simple, and memorable meals from the mountain, including the not-to-miss casunziei with red beets and canederli. Although a little off-the-beaten-track on the way up Rio Gere at the base of the ski trails of Faloria and Cristallo, it is an event you will not forget. 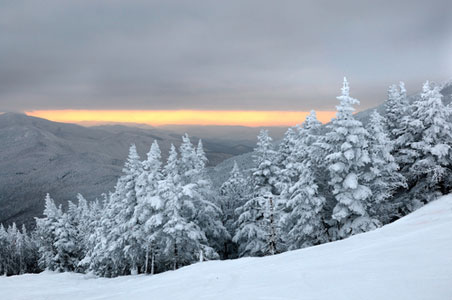 Skiers in the west always laugh when the virtues of east coast skiing are mentioned, but I have seen more than one self-proclaimed powder hound eat their words after a visit to Stowe. True, they don’t have the vertical their brothers in the west provide, but contrary to popular belief, they do get powder and with it comes a rich skiing history. Vermont’s first ski area, Stowe Mountain Resort includes two mountains, Mount Mansfield (VT’s highest peak), and Spruce Peak; the former’s first trails were cut in 1933. And the town of Stowe, founded in 1763, has kept much of its original charm. The diehard supporters of Stowe argue that the best skiing in the East, if not most challenging terrain, is here. I am inclined to agree. It takes some real grit and sound technique to conquer the super steep "front four" with grace. Of the four, I would start with Liftline.

Break a leg, but not on the slopes: If skiing and a show sounds like heaven, enjoy a shot of culture at The Spruce Peak Performing Arts Center. New in 2010, the state-of-the-art facility houses all types of events from live concerts and theater to dance and comedy performances.

Something Special: Snowshoe or hike "the notch" between Smugglers Notch and Stowe. Scenic Highway Route 108 is closed during the winter, but if you park at the end of the road and trudge up on foot you will be rewarded with lovely views that only the east could provide. 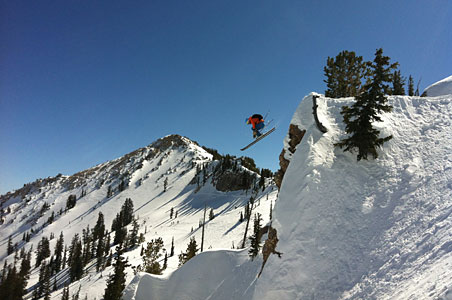 What is Utah’s largest ski resort? Park City? Snowbasin? No, but nice guess. At 4,000 skiable acres and a mere 35 min drive from Salt Lake City’s International airport, Canyons Resort is Utah’s largest and most accessible ski area. With the myriad of improvements since 2010, there is plenty to get ski enthusiasts as well as luxury lovers, adventures seekers, and foodies excited about. North America’s first heated chairlift, the Orange Bubble Express, carries skiers up to seven peaks that include the entire spectrum of skiing terrain—pristine groomers, to gladed tree skiing, and if extreme terrain is your wish, head to Ninety-Nine 90, the all expert area. Truth be told, after winning a contest at Canyons three years ago, I fell so hard for the place I begged them to let me stay. I have skied virtually everywhere, but Canyons is my home. And as their Ambassador of Skiing, I am the luckiest ski bum on the planet.

Adrenaline Junkies: Playing in the mountains isn’t just about skiing and snowboarding here—get your thrills on their Zip Tours, a series of zip lines that span up to 2,000 feet across, 250 feet above the slopes.

Pampered to Perfection: When there is a need to rejuvenate after a long day in the elements, there is no better place to recharge than the Golden Door Spa at the Waldorf Astoria Park City is literally a gondola ride from the slopes and with a long list of amenities and treatments including the signature Szekely Herbal Wrap and the Wasatch Warm Stone Massage.

Delicious Diversions: A large part of Canyons’ transformation was creating a culinary experience on par with the caliber of skiing. I can recommend any meal option on the property with confidence but my favorite restaurant is The Farm, at the foot of the Red Pine Gondola. Using local ingredients, the menu is a revolving door of fresh, seasonal specials. The Steelhead trout is my favorite, but everything is absolutely delicious. And definitely save room for the decadent peanut butter and chocolate mousse mud pie.

Ski with a Pro: Instead of hiring a guide to show you the mountain, spring for Canyons’ Ultimate Mountain Experience. You can choose from a lineup of about a dozen former and current elite athletes that include Olympic, World, and National Champions in both skiing and snowboarding to take you around Canyons. Some of the available athletes include Erik Schlopy and Doug Lewis, both of whom are World Championship Medalists, and Snowboardcross Olympian, Graham Watanabe.

Whistler Blackcomb, British Columbia: Mentioned on many lists as one of the best. May favorites are the chutes off of Glacier Chair—Ruby and Garnet are great, but if you are highly skilled, Sapphire is worth trying to shimmy into. And skiing the Peak to Creek is a must. At the end slide into Dusty’s Bar and BBQ and you might be rewarded with a set by beloved local band, The Hair Farmers.

Kitzbuhel, Austria: The entire country of Austria appears that it might be connected by ski lifts, you can go barely two kilometers before coming across another uphill apparatus. Kitzbuhel, too, has many peaks—it is hard to tell when one area stops and another begins. If you are there for the Hahnenkahm, the most storied and revered downhill race in history, embrace the wonderful chaos and enjoy the festivities that accompany the 70,000 fans: Austrians. Love. Ski. Racing. For an extreme sledding adventure, in German it is called rodeling, travel four kilometers away to Kirchberg in Tirol and head straight to the Gaisberg.