Coronavirus Leila Najafi Want to Stay in Costa Rica for Over a Year? A New Law Might Help You
Home  >  News   >   7 Best Post-Holiday Winter Festivals 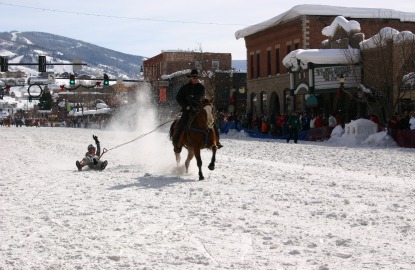 Snow-covered mountains and frozen lakes remain part of the landscape well past New Year’s in northern regions across the continent, and residents who live in chilly locales opt to venture out to enjoy the weather rather than hole up indoors. Festivals and carnivals featuring ice sculptures, sled dog races, sleigh rides, and more, give travelers a chance to join locals in fun, annual traditions. We’ve rounded up the best of the fests—from Vermont to Alaska—for you to consider while vacationing in your favorite winter wonderland.

The Steamboat Springs Winter Carnival (February 8 to February 12), has a true Western flavor, with horses as the stars of the carnival’s happenings along the town’s main street. There are shovel races—participants sit on shovels pulled by horses—and an event in which skiers hang onto a lasso held by a cowboy on horseback. On the mountains outside town, there’s everything from ski jumping competitions to slalom races. There’s also a biathlon that involves athletes dressed in vintage fur trapper’s clothing who ski and simultaneously shoot black powder muzzleloaders.

Good to Know: Don’t miss the opening ceremony with the "Lighted Man"—a skier who slaloms down a dark mountain with Roman candles and rockets shooting from his costume.

The St. Paul Winter Carnival in Minnesota (January 26 to February 5) is the oldest and largest winter festival in the U.S. In 1885, a New York Times reporter suggested that St. Paul was too cold for human habitation, and to prove him wrong the city held its first festival the following year. The carnival is best known for the immense ice castle that’s historically been its centerpiece; today events also includes snow and ice sculptures, juried art shows, outdoor concerts, sled dog races, and autonomous snowplow competitions—where inventors attempt to clear a snowy path with their robotic snowplows.

Good to Know: There’s a legend connected to the carnival’s history. While traveling in his kingdom, Boreas, King of the Winds, discovers St. Paul. He deems the city a winter paradise, and after making it his home and the center of his domain, he throws a carnival to celebrate. But his jealous brother, Vulcanus Rex, the God of Fire, burns the King’s castle, forcing him to leave St. Paul and return to Mount Olympus.

Dubbed the Mardi Gras of the North, the Quebec Winter Carnival (January 27 to February 12) is said to be the largest winter carnival in the world. Daytime activities include rafting, ice slides, and sleigh rides—and the fun continues well into the evening with night parades, dance parties, and an arctic village with three spas and an outdoor hot tub. The popular extreme canoe race on the St. Lawrence River, through slush and over ice floes, was held at the first carnival in 1894.

Good to Know: When somebody asks if you’d like a "caribou," they’re referring to a potent winter brew—a combination of vodka, brandy, sherry, and port.

There are parades, fireworks, and exhibitions of curling and woodsmen’s logging skills at the Saranac Lake Winter Carnival (February 3 to February 12), but the major draw is the immense ice palace. It can stand as high as 60 feet, and has ice thrones for the carnival’s royal court. Those looking for active diversions can enjoy winter sports such as ice skating, inner tubing, and softball played on snowshoes.

Good to Know: Look for the "IPW 101" carved somewhere on the walls of the ice palace. It stands for "International Palace Workers 101"—an inside joke among the people who build the palace each year.

Check out the "Snowgolf" Tournament in Stowe, Vermont

The circus theme of this year’s Stowe Winter Carnival (January 16 to January 29) in Northern Vermont, titled "The Greatest Snow on Earth," is sure to spark plenty of kid appeal. Onlookers can witness professional ice carvers chip away at their masterpieces on January 20, the day before the official ice carving competition. Two other popular activities include the "Snowgolf" tournament (January 16), where teams in costume play 11 holes of golf on a snow-covered course, and an entire Saturday of "Snowvolleyball" games (January 28).

Good to Know: Stowe is known as the "Ski Capital of the East" thanks to its annual snowfall average of 22 feet and location at the base of Mount Mansfield, the highest mountain in Vermont, at 4,395 feet.

Skate on the World’s Longest Ice Rink in Ottawa, Ontario

The Ottawa Winterlude (February 3 to February 20) offers the opportunity to skate on the world’s longest ice rink: the Rideau Canal Skateway. The canal is a UNESCO World Heritage site, and the Skateway stretches for almost five miles through the heart of Ottawa; rest areas alongside offer hot chocolate and chairs. Other attractions include bed races and hockey games, and there’s a hands-on igloo-building workshop. Snowflake Kingdom, a playground made of snow, entertains young Winterlude-goers with slides and obstacle courses.

Good to Know: Foodies will want to check out Taste of Winterlude to sample food and wine from some of Ottawa’s best restaurants, and to pick up cooking techniques from the chefs.

Native art and culture play a major role in events at the Anchorage Fur Rendezvous Festival (February 24 to March 4). In addition to an ice bowling tournament, the "Running of the Reindeer," and team snowball fights, there’s a native arts market and a “Blanket Toss”—a native Alaskan tradition in which a person is tossed from a blanket high into the air to scan the ocean for whales.

Good to Know: The fur auction is a throwback from the festival’s early days: In the beginning of the 1900s, when trappers emerged from the wilderness to sell their wares, it was a time to socialize and compete for honors such as having the longest fox pelt.

Do you have a favorite winter carnival? Let us know by joining the conversation at Fodors.com.