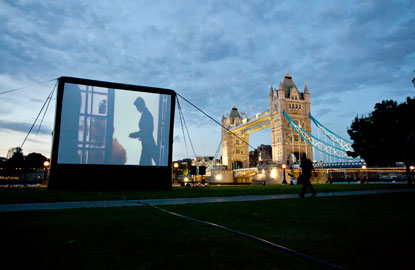 There’s something extra special about watching a movie outside, under the stars. Where we once flocked to drive-thrus, we now pile in to parks and onto rooftops to get a glimpse of the big screen while still enjoying the warm summer temps. From New York City to Santa Cruz, California, and from London to Paris, alfresco films are increasingly popular summer pastimes.

So as a last hoorah to remaining days of sunshine, why not drop by one of these events on your travels or in your hometown? In most cases you’ll have to bring your own munchies and beverages (a nice change from the popcorn and soda combination) and, of course, a blanket to sit on.

When: Select Sunday nights in August and September

Details: Beverly Canon Gardens (241 N. Canon Drive) hosts this Sunday-night movie series featuring classic family-friendly flicks that kick off at 8 pm. The Aug. 12 film is "Casablanca," Aug. 26 you’ll find a screening of "Mirror Mirror," and the "People’s Choice Selection" will be screened on the series’ final night of Sept. 9.

"Film on the Rocks"

When: Select Monday and Tuesday nights in August

Details: Hosted at the stunning Red Rocks Amphitheatre—where rock groups like Wilco and The Beach Boys recently performed— a half hour West of Denver, "Film on the Rocks" takes advantage of non-concert nights. Entrance costs $12 and includes pre-film live music beginning at 7 pm with the movies rolling at dusk. On Aug. 13 the film "Spirited Away" (Japanese animated fantasy-adventure) will be shown and on Aug. 20 it’s "Awesome: I F*in’ Shot That" (live taped performance of a Beastie Boys concert in Madison Square Garden).

When: Wednesday, Thursday, Friday, and Saturday nights in August

Details: Sponsored by the City of New York Public Parks & Recreation, this traveling film series makes stops at public parks at all five boroughs. Coming up are a mix of new and old family-friendly movies, including "Kung Fu Panda 2" on Aug. 17, "Winnie the Pooh" on Aug. 22 and "Puss in Boots" on Aug. 24.

When: Saturday nights through Sept. 1; and Sunday, Sept. 2

Details: Tying into the Hollywood backdrop, and adjacent to Paramount Studios, the Cinespia series is held in Hollywood Forever Cemetery, where a long list of silver screen stars are buried. This year’s film selections include "Sunset Boulevard" on Aug. 5, "The Birds" on Aug. 25, "Dirty Dancing" on Sept. 1 and "Scarface" on Sept. 2. The gates open at 7:30 pm and the movies begin at 9 pm.

When: Select dates through Aug. 26

Details: Whether it’s a South African science-fiction thriller produced by Peter Jackson ("District 9" on Aug. 11), the Sofia Coppola directed "Virgin Suicides" on Aug. 18 or some obscure French flick you’ve never heard of ( "L’Esquive" on Aug. 23), there is a little bit of something for every type of movie lover. Held in Parc de la Villette, one of Paris’ largest parks in the city’s 19th arrondissement, the Cinéma en Plein Air outdoor-film series is a favorite for locals, including expats.

London, and other cities in England

When: Select dates through Sept. 22

Details: Classic films are the theme for The Luna Cinema, which travels to parks and palaces in London (like Kensington Palace and Kew Gardens) and other cities and regions in England such as Kent, Bexley, Canterbury, Dorset, Sussex, and Surrey. American classics are on deck this summer, like "The Rocky Horror Picture Show" on Aug. 10 at Leeds Castle in Kent and "Back to the Future" on Aug. 11 at Rochester Castle in Kent.