Best of the West for Families: 15 Fun Things to Do with Kids

The West Coast is a perfect place to get your family some spring break fun. Check out our favorite things to do, from flying a kite in Seattle to clambering through restored wooden ships in San Diego. 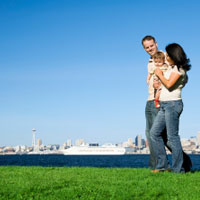 Fly a Kite at Gasworks Park. Though technically in Wallingford, this lovely park can be easily reached from Fremont Center by strolling along the waterfront Burke-Gilman Trail. The park gets its name from the hulking remains of an old gas plant, which, far from being an eyesore, actually lends some character to the otherwise open, hilly, 20-acre park. Get a good view of Downtown Seattle from the zodiac sculpture at the top of the hill, or even better, fly a kite there. There are always ducks down by the lake waiting to be fed, and the sand-bottom playground has monkey bars, wooden platforms, and a spinning metal merry-go-round.

Learn about the cultures of Asia and the Pacific at Wing Luke Asian Museum. Named for the Northwest’s first Asian-American elected official, this small, well-organized museum surveys the history and cultures of people from Asia and the Pacific islands who settled in the Pacific Northwest. Alongside the costumes, fabrics, crafts, and photographs that kids will love, the museum also provides sophisticated looks at how immigrants and their descendants have transformed and been transformed by American culture. The most poignant and sobering part of the museum is an excellent multimedia exhibit dealing with the internment of Japanese-American citizens in camps during World War II.

Watch the boats go up and down at Ballard Locks. Though it may not seem terribly exciting to you, your kids will love watching this fascinating system in action. Giant ships pass through the locks—an important passage in the 8-mi Lake Washington Ship Canal that connects Puget Sound’s saltwater Shilshole Bay to freshwater Lake Washington and Lake Union—as they tie up and pass through this giant aquatic elevator. In addition to boat traffic, the locks see an estimated half million salmon and trout make the journey from saltwater to fresh each year with the help of a nearby fish ladder.

Watch elephants at the Oregon Zoo. This beautiful animal park in the West Hills is famous for its Asian elephants. Major exhibits include an African section with rhinos, hippos, zebras, and giraffes. Steller Cove, a state-of-the-art aquatic exhibit, has two Steller sea lions and a family of sea otters. In summer a 4-mi round-trip narrow-gauge train operates from the zoo, chugging through the woods to a station near the International Rose Test Garden and the Japanese Garden. Take the MAX light rail to the Washington Park station. www.oregonzoo.org

Learn about natural resources at the World Forestry Discovery Center Museum. Visitors will find interactive and multimedia exhibits that teach forest sustainability. A white-water raft ride, smoke-jumper training simulator, and Timberjack tree harvester all provide different perspectives on Pacific Northwest forests. On the second floor the forests of the world are explored in various travel settings. A canopy lift ride hoists visitors to the 50-foot ceiling to look at a Douglas fir. A $1 parking fee is collected upon entry. Or take MAX light rail to the Washington Park station.

Stargaze at the Oregon Museum of Science and Industry. Hundreds of hands-on exhibits draw families to this interactive science museum, which also has an Omnimax theater and the Northwest’s largest planetarium. The many permanent and touring exhibits are loaded with enough hands-on play for kids to fill a whole day exploring robotics, ecology, rockets, computers, animation, and outer space. Moored in the Willamette as part of the museum is a 240-foot submarine, the USS Blueback, which can be toured for an extra charge.

Operate a traffic signal at the San Francisco Railway Museum. A labor of love brought to you by the same vintage-transit enthusiasts responsible for the F-line’s revival, this one-room museum and store celebrates the city’s storied streetcars and cable cars with photographs, models, and artifacts. The permanent exhibit will eventually include the (replicated) end of a streetcar with a working cab for kids to explore. In the meantime, little ones will have to content themselves with operating the cool, antique Wiley birdcage traffic signal and viewing (but not touching) models and display cases. Right on the F-line track, just across from the Ferry Building, this is a great quick stop.

Watch boat builders at Hyde Street Pier. If you want to get to the heart of the Wharf—boats—there’s no better place to do it than at this pier, by far one of the Wharf area’s best bargains. Depending on the time of day, you might see boat builders at work or children pretending to man an early-1900s ship. Don’t pass up the centerpiece collection of historic vessels, almost all of which can be boarded. The newly restored Balclutha, an 1886 full-rigged three-masted sailing vessel that’s more than 250 feet long, sailed around Cape Horn 17 times; kids especially love the Eureka, a side-wheel passenger and car ferry, for her onboard collection of vintage cars. 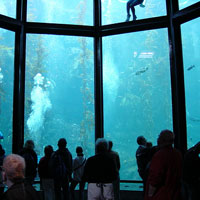 Pet a bat ray at the Monterey Bay Aquarium. Take day trip from San Francisco to visit this magnificent aquarium. The beauty of the exhibits here is that they are all designed to give a sense of what it’s like to be in the water with the animals—sardines swim around your head in a circular tank, and jellyfish drift in and out of view in dramatically lighted spaces that suggest the ocean depths. A petting pool gives you a hands-on experience with bat rays, and the million-gallon Outer Bay tank shows the vast variety of creatures (from sharks to placid-looking turtles) that live in the eastern Pacific.

Check out the cars at the Peterson Automotive Museum. You don’t have to be a gearhead to appreciate this building full of antique and unusual cars. The Petersen is one of the coolest museums in town, with some of the most unusual creations on wheels and rotating exhibits about the icons who drove them.

Catch some mariachi on Olvera Street. This busy pedestrian block tantalizes with piñatas, mariachis, and fragrant Mexican food. As the major draw of the oldest section of the city, known as El Pueblo de Los Angeles, Olvera Street has come to represent the rich Mexican heritage of L.A. Vendors sell puppets, leather goods, sandals, serapes (woolen shawls), and handicrafts from stalls that line the center of the narrow street, and on weekends the restaurants are packed as musicians play in the central plaza. The weekends that fall around two Mexican holidays, Cinco de Mayo (May 5) and Independence Day (September 16), also draw huge crowds.

Scream your head off at Six Flags. Those who might be looking for “monster” rides and breathtaking roller coasters come to this anti-Disney amusement park for several of the biggest, fastest, and scariest in the world. The aptly named Scream, for instance, drops you 150 feet and tears through a 128-foot vertical loop. Shows, dining, parades, younger kidsâ€™ rides, and those scream-inducing roller coasters make it a full day on this massive park. www.sixflags.com

Clamber aboard a restored wooden ship at the Maritime Museum. A must for anyone with an interest in nautical history, this collection of six restored and replica ships affords a fascinating kid-friendly glimpse of San Diego during its heyday as a commercial seaport. The museum’s headquarters are the Berkeley, an 1898 ferryboat moored at the foot of Ash Street. Its ornate carved-wood paneling, stained-glass windows, and plate-glass mirrors have been restored, and its main deck serves as a floating museum, with permanent exhibits on West Coast maritime history and complementary rotating exhibits.

Explore the New Children’s Museum. NCM blends contemporary art with unstructured play to create an environment that appeals to children as well as adults. As San Diego’s largest green building project, the 50,000-square-foot structure operates on solar energy, is constructed from recycled building materials, is convection-cooled by an elevator shaft, and features an Organic To Go café. Interactive exhibits include a texture forest; a rain house powered by child-operated bicycles; a graffiti-tagged climbing wall; and Tent City, accessed through illuminated tunnels, where children can build forts. The adjoining 1-acre park features outdoor reading circles and is conveniently located across from the Convention Center trolley stop.

Meet a shark at SeaWorld San Diego. One of the world’s largest marine-life amusement parks, SeaWorld is spread over 189 tropically landscaped bayfront acres—and it seems to be expanding into every available square inch of space with new exhibits, shows, and activities. Kids get a particular kick out of the Shark Encounter, where they come face-to-face with sandtiger, nurse, bonnethead, black-tipped, and white-tipped reef sharks by walking through a 57-foot clear acrylic tube that passes through the 280,000-gallon shark habitat.