Best New Hotels Around the World

Countless hotels swung open their doors this year, from urban resorts to countryside inns. But not all of them are worthy of a place on our Fodor’s 100 Hotel Awards. We sifted through the lot and chose 25 for our New & Noteworthy category, highlighting hotels so enticing and forward thinking, we just couldn’t ignore them. From Chicago to Ecuador and London to Turkey, these hotels cover a good chunk of the globe. They also represent all kinds of styles and budgets; some of the biggest trends we noticed this year: smaller is better, eco is (still) in, and public art is more important than ever.

These are the best new hotels around the world for 2012 (in no particular order). 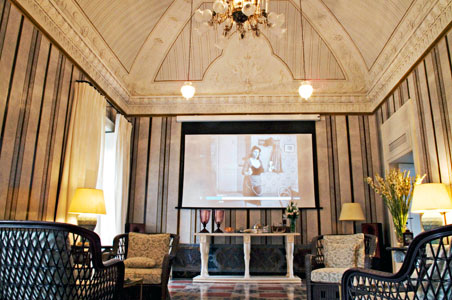 Frescoed ceilings, marble floors, and ornate fixtures are among the hallmarks of this renovated palazzo, set in a remote part of southern Italy once inhabited by the ancient Greeks. Owned, restored, and opened in 2012 by cinema legend Francis Ford Coppola, the 19th-century castle invites guests to luxuriate in one of nine bespoke suites.

Inn at the Presidio

Tucked in a redwood and eucalyptus forest overlooking the Golden Gate Bridge, the Inn at the Presidio is a one-of-a-kind experience in San Francisco. The building, once known as Pershing Hall, served as stomping grounds for military personnel for nearly a century before the base was closed.

Nestled in a grove of pine and citrus trees among ancient ruins, the minimalist, modern architecture of this hotel typically elicits a one-word response: amazing. Guest accommodations at this heavenly spot—set in a serene valley on Turkey’s Bodrum Peninsula—are limited to just 36 stone cottages, all of which have traditional Turkish fireplaces, outdoor dining areas, and Mediterranean gardens dotted with private pools and daybeds.

Imagine sinking into a luxuriously deep, claw-footed tub in the midst of a secluded pasture surrounded by trees, long grasses, and the open blue sky. This is a signature experience at Kingsford Homestead, one of the Barossa Valley’s newest and most exquisite inns.

Opened in April 2012, Mashpi Lodge is part of a 2,600-acre conservation project started by one of Quito’s former mayors, in the heart of Ecuador’s cloud forest. Made almost entirely of steel and glass, the strikingly modern lodge is about two-and-a-half hours northwest of Quito and provides guests with the opportunity to immerse themselves in one of the world’s most unusual and diverse ecosystems while also enjoying first-class accommodations and cuisine. 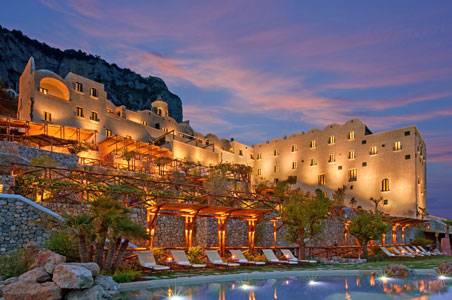 Opened in summer 2012 as one of the Amalfi Coast’s most spectacular boutique resorts, the much-anticipated Monastero Santa Rosa Hotel & Spa is already helping to redefine the region’s resort scene and, we think, will come to embody the perfect Amalfi getaway. The monastery complex was first erected on the cliffs overlooking the Gulf of Salerno in the 17th century, then converted into one of Italy’s castle hotels in the 1920s before eventually falling into disrepair.

Some have said you can see the curve of the earth from this quiet expanse of land on the edge of Botswana’s Makgadikgadi Salt Pans, in the Kalahari Desert. Though this African safari lodge offers the traditional morning and night wildlife outings, guests here get to go beyond the thrill of seeing the Big 5, with activities like stargazing, desert Quad rides, bird-watching, and cultural site visits.

Located across the street from the Van Gogh Museum, this 129-room hotel transforms a former music conservatorium into a cutting-edge design hotel. Opened in late 2011, the uber-modern, out-of-the-box property is worth a look on style alone.

The showstopping design of the clean-lined hotel alone makes it worth the splurge. Housed in a historic 1930s building, this newly opened fashion-world hotspot has views of the Duomo and a front-row seat at the corner of two of the city’s best shopping streets. In true Armani style, no detail is spared, from welcome cookies stamped with the letter “A,” to all-marble bathrooms and guestrooms finished with luxurious linens.

Upon arrival, it’s hard to believe this newly opened hotel—and latest dining hotspot—is tucked into one of New York’s emerging neighborhoods. Along with well curated, apartment-like rooms, the Euro-bohemian feel is carried through the property, from the elaborate all-upholstered lobby desk and parlor lined with rich, pomegranate-hued carpet and armchairs, to the bar with an impressive 24-foot-long mahogany top, and the clubby duplex library lounge with a spiral staircase. 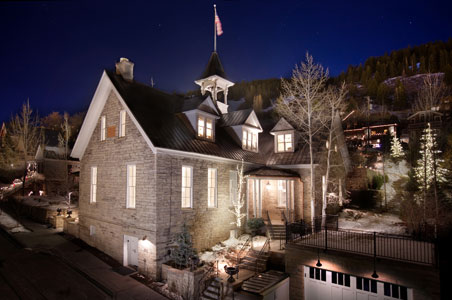 Built in 1889, Washington School House—a National Historic Registry landmark—is one of the last surviving original school houses in the US, and has now become one of Park City’s most exclusive boutique hotels. Opened in December 2011, this 12-room property is nestled in the center of the city’s chic downtown, just steps from the bustling Main Street.

You’ll live like a local at Hub Porteno, where hospitality extends outside the elegant Recoleta petit-hotel’s four walls. In addition to feeling like an upscale private home and boasting luxe amenities, this newly opened hotel offers a novel take on the concierge experience by providing custom travel itineraries led by true insiders, from eminent professors to top designers and sportsmen.

Situated on the site of Thomas Lord’s first cricket ground, the Dorset Square Hotel is the epitome of London chic, in the heart of Marylebone. Quirky details add an element of fun, like discreet cricket references that allude to the property’s original use. Set in a traditional London townhouse, the hotel features 38 rooms, all individually decorated, plus a ground-floor drawing room that’s the perfect spot to unwind and enjoy a drink from the honor bar.

Set in a historic 1920s hotel overlooking Lincoln Park and Lake Michigan, the new Hotel Lincoln (opened March 2012) captures the very essence of Chicago and, in particular, the surrounding Lincoln Park neighborhood. The kitschy cool decor teems with fun hometown references, like vintage Midwestern furnishings and art created by Chicagoans. Rooms are comfortable, fun, and filled with an eclectic assortment of throw pillows and unusual knick-knacks.

There’s a lot going on in Istanbul hotel-wise these days, but for our money this tops the list of newbies worth checking out. Located in central Taksim Square but away from major tourist attractions, the sophisticated Edition offers guests a taste of a different side of Istanbul from its perch in the business district.

Stunning art and design are second only to the service at this grand hotel opened in September 2012. A towering sculpture from one of China’s most celebrated contemporary artists, Zhang Huan, makes for an impressive entrance, and the bi-level lobby features enormous calligraphy paintings and a handcrafted piano. 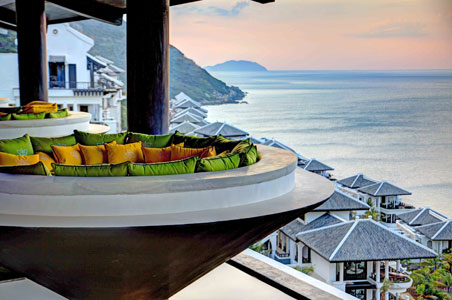 Set in a former Spanish colonial palace and convent in the center of Cuzco, Palazio Nazarenas opened to rave guest reviews in June 2012. Orient Express, under the supervision of Peru’s National Institute of Culture, undertook the renovation, which involved rehabilitating original palace buildings, removing and rebuilding newer additions, and excavating pre-Inca and Inca walls and artifacts unearthed along the way.

Upon entering the lobby—marked by faceted mirrored walls, a giant silver cloud sculpture, and a large bedazzled deer on a pedestal—it’s obvious this glam hotel set in a frou frou neighborhood is anything but ordinary. Opened in January 2012, the instant-classic resort takes cues from sophisticated Art Deco days, with interiors by Toronto-based firm Yabu Pushelberg, and features a 1,000-square-foot private beach with plush cabanas.

Housed in an abandoned circa-1970s apartment building, this boutique property, opened in 2012, is something completely new and needed in Panama City, which is otherwise filled with internationally branded chain hotels. It’s also the only standout place to stay in Casco Viejo (Old Town).

The Out NYC hotel, which has been dubbed the first “straight-friendly” city resort really does feel like a getaway from the big city. Housed in a former motor lodge that’s right off Times Square, designers ingeniously turned former rows of parking into bamboo-lined lounges and outdoor film-screening rooms, which the 105 guestrooms peer out upon.

As you pull up via speedboat and disembark on a private pier, it’s clear that this newcomer is aiming to redefine the notion of urban Bangkok luxury. Opened in June 2012, this chic, exclusive resort offers guests a one-of-a-kind city experience from its waterfront location in the royal Dusit district. 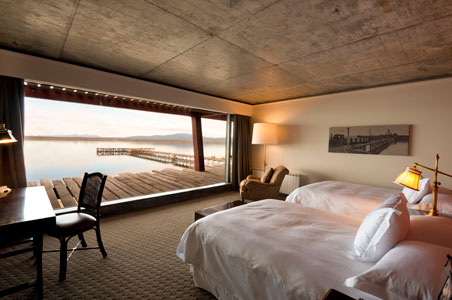 Since it opened in late 2011, The Singular Patagonia has been the most talked-about hotel property in Chilean Patagonia. Situated on a National Historic Landmark site, the hotel is the result of a meticulous, 10-year transformation of a former cold-storage plant into a striking industrial-meets-modern property.

If you’ve ever dreamed of owning a villa in Tuscany, you won’t want to miss a stay at this magical inn. Set in a charming red-brick villa dating to the 16th century, the recently opened Villa Armena Relais features just 10 rooms surrounded by the rolling hills of the Tuscan countryside.

In a city filled with so many historic luxury hotels, this much-anticipated newcomer—the first W in France—is making a bold entrance with its tongue-in-cheek twist. The lobby lounge itself is an art installation. Bookshelves are lined with oddities such as red model cars exposed in bell jars, a mirrored wall with retro cartoon-like characters, and a floor-to-ceiling upholstered black-and-silver banquette.