News Robin Catalano Horses Run Wild on This Puerto Rican Island⁠—but for How Much Longer?
NewsBest Lighthouses to See This Fall

Best Lighthouses to See This Fall

A beacon in the distance. A wonder of engineering with origins dating back to Ancient Egypt. The lighthouse conjures remembrances of wayfaring sailors battling merciless storms and relentless winds, seeking a glimmer of hope somewhere out in the deep, endless darkness.

This fall, voyage to some of the country’s most beautiful lighthouses, restored to their former glory amid stunning landscapes. 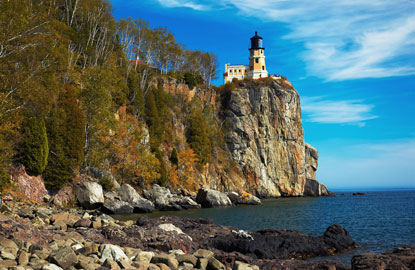 Split Rock Lighthouse is one of the best places to experience Minnesota’s colorful fall foliage. The surrounding birch and ash trees, intertwined with the evergreen trees of fir and spruce, become a palette of oranges, yellows, reds, purples, and greens. Picture this as the background of the lighthouse’s already dramatic landscape: perched atop a 130-foot tall cliff, against which the waves of Lake Superior periodically crash. The historic landmark, constructed in 1910, is located within Split Rock Lighthouse State Park, where visitors can go camping right along the Great Lake. Split Rock even has “cart-in” campgrounds, providing carts which can carry supplies from the parking lot to the campsites. 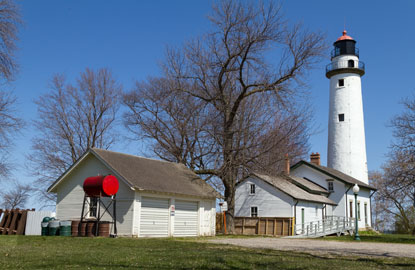 The Midwest’s fall colors can also be seen on the shore of another Great Lake, Lake Huron in the appropriately named Port Hope, Michigan. There, Pointe Aux Barques Lighthouse was built from stones and rocks in 1848 to warn sailors of the shallow waters of the Saginaw Bay portion of the lake. French for "point of little boats," Pointe Aux Barques is still in operation today as a navigational aid, although its lighthouse keeper has been replaced by an automated system. 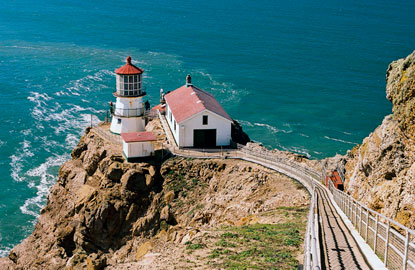 The mariners of the 19th century also encountered grave hazards around Point Reyes, the windiest place on the Pacific Coast and the second foggiest place in all of North America. Thus, the Point Reyes Lighthouse was built in 1870. It is now part of the Point Reyes National Seashore and maintained by the US National Park Service. Photographers will especially enjoy Point Reyes in the fall, when fog is uncommon and visibility is high. 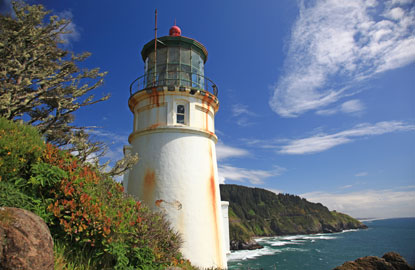 Up the coast, discover what it feels like to be a lighthouse keeper, at the Heceta Head Lighthouse Bed and Breakfast in Yachats, Oregon. Here, the historic light keeper’s house, a short walk to the lighthouse itself, has been converted into a lovely, cozy little inn. The spectacular views—the house sits upon a cliff overlooking the Pacific Ocean—rival the food here, a seven-course breakfast created by chefs Carol and Mike Korgan. The lavish meal highlights the local culinary treasures Oregon has to offer in courses like sweet cardamom tomato bread and white chocolate Frangelico cream. 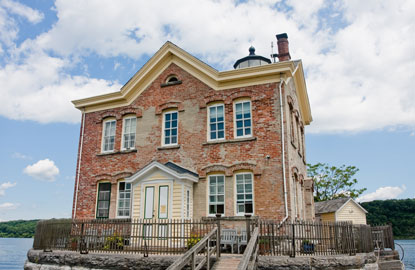 If spending the night in a lighthouse itself piques your interest, head to Saugerties, New York. Here, the Saugerties Lighthouse has been converted to a secluded bed and breakfast and museum, located right on the Hudson River with the backdrop of the Catskill Mountains. Visitors reach the lighthouse from the parking lot via a half-mile hiking trail boasting hundreds of species of fauna and flora, including bald eagles, blue herons, and Eurasian water chestnut trees. 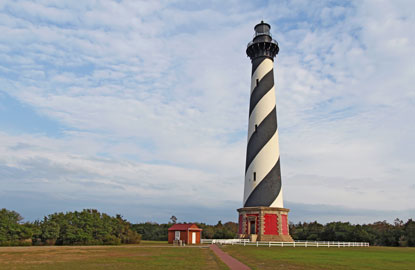 The Cape Hatteras Lighthouse is a major attraction near the southern end of North Carolina’s Outer Banks, its appearance encompassing the quintessential American lighthouse—a tall tower painted with candy-cane stripes. Climbing the lighthouse is a must, and it is open to the public for climbing until Columbus Day in October. The 248 iron spiral stairs make for an invigorating hike. Tickets for lighthouse tours are $7 for adults and $3.50 for children and seniors and are available daily from 8:15 am to 4:30 pm. 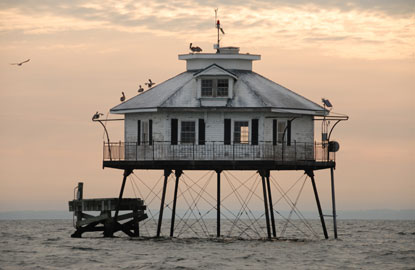 From a typical-looking structure to a most unique one, Middle Bay Lighthouse is a cottage with a hexagonal shape built in the "screw-pile" style pioneered by blind Irish engineer Alexander Mitchell. Its six-sided wooden frame stands on seven wrought iron legs, called piles, which are screwed into the bottom of the Mobile Bay. Visit the fascinating work of architecture by sea, on a guided kayaking tour of the bay’s two historic lighthouses—Middle Bay and Sand Island Lighthouses.