News Apeksha Bhateja It's a Tie: The 2 Most Annoying Airline Passenger Behaviors of 2022
NewsBest Hotels In and Near Yosemite National Park

Best Hotels In and Near Yosemite National Park 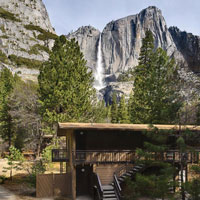 At 1,500 square miles, Yosemite is so large that where you stay greatly affects your plan to explore the park. From grand lodges to romantic inns, we’ve got the best lodging recommendations, with just the right blend of rustic charm and modern comfort. If possible, we highly recommend staying inside the park, but we’ve also got the best lodging options nearby too.

Inside the Park: Top Sights and Reservation Rules

The park’s most popular sights—Yosemite Valley’s famous granite monoliths and waterfalls as well as the giant sequoias of Wawona and Mariposa Grove—are in the southwest section of the park. More remote areas such as Toulumne Meadows and Hetch Hetchy are popular for backcountry trails.

Reserve your room or cabin in Yosemite as far in advance as possible. You can make a reservation up to a year before your arrival (within minutes after the reservation office makes a date available, the Ahwahnee, Yosemite Lodge, and Wawona Hotel often sell out their weekends, holiday periods, and all days between May and September). Book directly through Delaware North Companies Parks and Resorts. 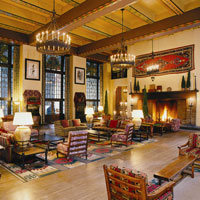 Outside the Park: Nearby Towns and Attractions

Marking the southern end of the Sierra’s gold-bearing mother lode, Mariposa is the last moderate-sized town before you enter Yosemite on Route 140. In addition to a mining museum, Mariposa has numerous shops, restaurants, and service stations. Motels and restaurants dot both sides of Route 41 as it cuts through the town of Oakhurst, a boomtown during the Gold Rush that is now a magnet for fast-food restaurants and chain stores. Oakhurst has a population of about 13,000 and sits 15 mi south of the park. The gracious Sonora, 70 mi west of the park via Routes 120 and 49, retains evidence of its own vibrant, Gold Rush history. Stroll Washington Street and see Old West storefronts with second-story porches and 19th-century hotels. The tiny town of Lee Vining, near the park’s eastern entrance, is home to the eerily beautiful, salty Mono Lake, where millions of migratory birds nest. Visit Mammoth Lakes, about 40 mi southeast of Yosemite’s Tioga Pass entrance, for excellent skiing and snowboarding in winter, with fishing, mountain biking, hiking, and horseback riding in summer. Nine deep-blue lakes form the Mammoth Lakes Basin, and another hundred dot the surrounding countryside. Devils Postpile National Monument sits at the base of Mammoth Mountain.

Best Nearby Lodging: Reviews and Distance from the Park