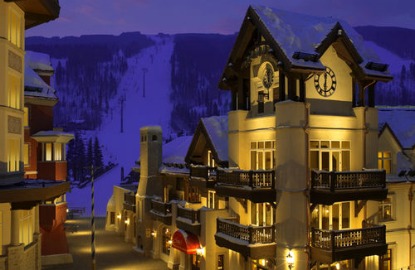 Hotels and resorts often transform into winter wonderlands to attract guests during the chilly season, but because decorations in the lobby only go so far, many properties have hopped on the pop-up ice skating rink trend. Whether staying at swanky urban spot in New York, or a mountain getaway in Vail, we’ve rounded up our favorites from around the world.

The Charles Hotel in Boston

Rooms at The Charles Hotel in Boston look out on the Charles River and Harvard Square in Cambridge—and now an ice skating rink as well. The hotel keeps its 2,900-square-foot rink open through March, and both guests of the hotel and visitors get the same bargain rates: $5 for adults, and $3 for children 12 and under.

The Standard in New York

Having debuted in 2010, the 3,000-square-foot rink at The Standard, a boutique hotel in New York’s Meatpacking District, reopened in December along with the adjoining Kaffeeklatsch, where skaters can snack on crêpes and waffles, hot chocolate, or spiced apple cider. The rink is open to the public until midnight every day through February, and until 1 a.m. on Fridays and Saturdays. Admission is $13 for adults.

A private ice rink was installed in December at La Réserve Genève Hotel & Spa, and through February 26, guests can skate (or take lessons) while gazing out at Lake Geneva and the snow-capped Alps. After skating, kick back at a pop-up chalet, where waiters deliver blankets, champagne or hot mulled wine, crêpes, oysters, and caviar. A weekend stay at the property starts at $1,076, minus champagne and caviar.

Arrabelle at Vail Square in Colorado

Vail may be best known for its world-class skiing, but those who prefer to zoom around on level ground have options, too. The Arrabelle at Vail Square (pictured above) doesn’t have a rink connected to it, but the Adlerhof Ice Rink, open daily with fire pit anchors for foot-warming, is just steps away. After skating, you can stroll the shops, or grab a bite at one of Vail’s restaurants.

Fodors.com contributor Cathleen McCarthy is the travel rewards expert for CreditCards.com and covers hotel and travel deals in Northeast cities on her own network, Save on Cities. Her stories have appeared in The Washington Post, WSJ, Amtrak ARRIVE, Town & Country, and many inflight magazines.