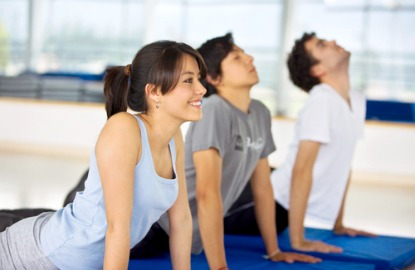 Access to yoga while on vacation is a must for many, and while there’s no shortage of exotic spa and wellness resorts that offer expert-instructed classes on the beach or in the jungle, what happens when you want to fit in a little Zen time during a city trip? It seems many city hotels fall short in the yoga department, with oftentimes little more than a boring beginner class thrown in here and there, usually held too early in the morning for most tastes. Fear not: You can count on a good stretch and a clear mind at these yoga-conscious city hotels.

The Morgans group and its New York City hotels (Hudson, Royalton, and Morgans; the Mondrian SoHo not included) have partnered with fitness-favorite Equinox. Guests staying at any of these properties receive complimentary daily passes to the gym (with various nearby locations), which means a daily lineup of reliable yoga classes to choose from (classes are covered with the day pass).

Independent yoga studio 889 Yoga opened its second location in the Thompson Toronto offering hotel guests easy access to over 30 classes weekly, like challenging athletic flow yoga, hot detox yoga, and even pre- and post-natal yoga. The popular Toronto-based studios charge $18.58 for a drop-in class; $80 for a five-pack; the same fees apply to guests at the hotel.

Unlike The Standard hotels in New York and Los Angeles, the Miami outpost comes with a spa (and an amazing one at that), and with it, a surprisingly solid yoga program. Six types of yoga (including Skanda and martial arts-and-yoga-combo Budokon) and monthly weekend yoga retreats (which include classes, accommodations, spa treatments, and more) led by in-demand instructors like April Martucci draw a toned crowd. While hotel guests have free access to the spa and its sweet hammam, they do have to pay the standard yoga class fee of $18.

Photo Credit: People at the Gym via Shutterstock