Where to Watch the Sunset in Bali 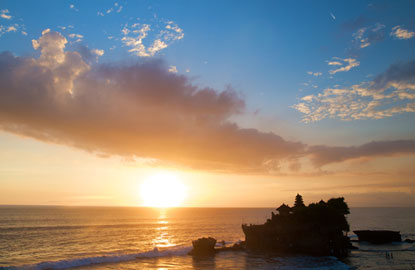 I recently returned from Bali and am happy to report that, as we all expected, there’s a lot more to the island than Eat, Pray, Love. One thing that was ubiquitous were bars hawking their view of the sunset made better by the drinks they’d serve you. Let’s be clear, Bali sunsets are beautiful (you’re in Bali—everything is beautiful), but they’re not the spectacular sunsets you might find in Santorini. That this was such a popular activity was somewhat surprising until we realized it was much more about the cool post-beach scene than about nature’s splendor in the sky. Unless you’re in college, I recommend skipping Kuta in favor of a more sophisticated scene in Seminyak and Petitenget.

Here are five spots to toast to the setting of the sun. (And that you’re in Bali.)

Pronounced like the French coup d’état, Ku De Ta is an après-beach bar and restaurant with ridiculously expensive prices – think $15 for a drink. But everything from its glorious position on Seminyak beach to its clever layout with a grassy lawn with plush cushions to spread out on, and direct entrance from the beach, makes it worth the trip. Plus, there’s something sexy and vaguely European about the ambiance, as if New York’s famous Lotus Bar met Ibiza’s Café del Mar, that draws an attractive set of tourists to match.

The W Hotel’s Woobar is a fairly recent Seminyak newcomer—it opened in March 2011—with prime beachfront position in the posh Petitenget scene. While the crowds haven’t quite decamped from Ku Dé Ta yet, the hotel’s glossy venues make for a nice option away from that scene. The downstairs Mediterranean lounge has a decent vibe, but for a loftier view, head to the Woobar sky deck where you can sip your Asian-inspired cocktail while perusing the scene, and, you know, the sunset too.

Located directly on Seminyak beach (think bean bag chairs on the sand) Crystal Palace is a slightly hippie place that’s great for kicking back with a few glasses of very affordable wine. There’s a decent Aussie selection, but while in Bali, also try the local Oddfellows label’s surprisingly tasty Chardonnay. You’ll usually hear live guitar being played or a DJ on the decks, but not at offensively loud volumes as some of its beach bar neighbors.

The Rock Bar at the Ayana Resort

On curving Jimbaran Bay, renowned for its fresh catch and mouth-watering grilled fish and seafood restaurants, the Rock Bar is perched somewhat precariously on the water’s edge. The thrilling location provides the perfect setting for sunset cocktails like, for example, a Rockito—a mojito but with Grand Marnier. And while there’s a decent small bites menu (the lobster spring rolls with tamarind glaze was delicious), save your appetite for one of the nearby fish and seafood warungs (er, restaurants). Walk along the sandy bay and pick the one that catches your eye. The quality is generally high across the board, and pricing is per kilo.

While overran Kuta first started as surf mecca, wave riders have decamped to the Bukit peninsula and to the reef breaks of Bingin Beach and Uluwatu. On Bingin Beach is where you’ll find the truly island-style "sunset bars" of laidback beachy dreams—warungs right on the beach, cliffside. Mix in with the predominantly Aussie surfers, kick up your flip flops, and pop open a Bintang (the local beer).