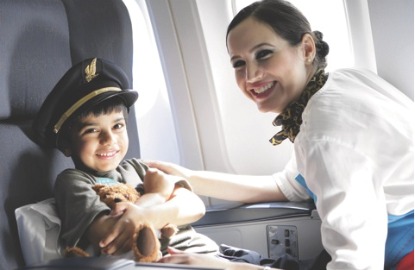 There are few things as frightening as taking a long-haul flight with small children in tow. You parents know the drill: First, it’s the walk of shame down the aisle, as other passengers avert their eyes in the hopes that looking away will somehow propel you and your offspring to a seat far, far away from them. Then, there’s the trepidation as you buckle your children in and wonder how they will spend the next eight hours confined in their seats. Will they bicker and bawl, loudly, over who gets to sit by the window? How many hours will it be before they start kicking the seat in front of them out of sheer boredom? And, if you fall asleep, will they break loose and run, screaming like banshees, down the length of the plane? These five airlines have worked hard to allay your fears, and have come up with special programs, food, and loot to keep their pint-size passengers (and you, by extension) happy at 35,000 feet.

Airline food is usually not particularly palatable, but Lufthansa has come up with special children’s menus with meals that will please even the pickiest eaters. The menu options, which include items like "Tiger Tail," a pancake filled with chicken and vegetables, and "Pirate’s Hand," fish fingers with cabbage and potato purée, were developed by Stefan Marquard, a famed German TV chef. Entrées contain little to no sugar and vegetables are hidden in many of the creations to make sure kids get a properly balanced meal.

The onboard activities, meanwhile, are all a part of "Lu’s World," (Lu being the airline’s little crane mascot), and include a variety of games, puppets, jigsaw puzzles, and card games. Children in first and business class get bonus booty in their own special amenity kit, which includes child-size earplugs, socks, eye mask, toothbrush kit, hair gel, and, of course, the requisite lollipop.

Insider Tip: As part of the Lufthansa Family Service, the airline offers guides to help navigate the airports in Frankfurt and Munich. Guides accompany families to their gate and, on landing, to baggage claim, as well as to restaurants, hotels,or car rental companies.

PLAN YOUR TRIP: Lufthansa flies to 203 different destinations. The main hubs are in Frankfurt, Munich, Düsseldorf, and Zurich, but the airline also flies from 22 North American cities, including New York, Boston, Charlotte, and Los Angeles.

If you’ve ever wished that you could afford to bring a nanny along on vacation, or at the very least on the flight, so that you’d have the freedom to read or watch a movie without interruption, Gulf Air has granted its passengers that wish. The airline has employed specially trained Sky Nannies on long-haul flights to entertain your children. They do puzzles, offer snacks during movies, set up bassinets if you’re traveling with a baby, and serve children their meals. Gulf Air also has plenty on hand to keep children entertained: Their in-flight entertainment system includes Disney specials and movies, as well as an educational audio channel.

PLAN YOUR TRIP: Gulf Air’s main hub is the Bahrain International Airport, and the airline flies to countries throughout Africa, the Middle East, and Europe. Gulf Air has code-share agreements with American Airlines and Virgin Atlantic to connect to major U.S. destinations.

Emirates’ onboard entertainment system, ICE, has hundreds of channels with new release family movies, Disney classics, musicals, audio stories, and interactive games (you can play against other passengers)—basically enough to keep your children occupied for an entire flight, no matter your destination. Children are given specially-designed kiddy-size headsets in bright colors and backpacks that include Dr. Seuss books, an Emirates kids’ magazine, games, coloring pencils, and a stuffed animal called a Querk, which comes in one of five different costumes, each designed to reflect an Emirates’ destination. If your child is flying on his or her birthday, the airline will even prepare a cake and take Polaroid pictures to mark the event.

Insider Tip: Skysurfers, Emirates’ frequent-flyer club for children between the ages of 2 and 16, offers the same benefits as Skywards, the adult program, as well as special children’s rewards, like vouchers to water theme parks.

PLAN YOUR TRIP: Emirates flies from Dallas, New York, Los Angeles, Seattle, San Francisco, and Houston to its hub in Dubai, and from there connects on to dozens of destinations in Asia, Africa, Europe, and the Middle East.

Comfy Seats for All on British Airways

Though it’s great that children up to 2 years in age fly free on most airlines, holding a heavy toddler on your lap for the duration of a long-haul flight can be more than a tad uncomfortable. On British Airways, toddlers can travel free of charge in their very own Britax seat, which fits directly on to the bulkhead. You have to request the seats before the flight and they are available on a first come, first served basis. British Airways also offers carry-cots for infants that attach to the bulkheads.

BA’s Skyflyers activity packs include a range of goodies, including a log book that allows children to record their travels and collect a signature from the captain certifying their flight. In celebration of the 50th anniversary of Paddington Bear last year, British Airways created an activity pack for 3- to 5-year-olds designed to look like Paddington’s well-travelled suitcase.

Insider Tip: British Airways’ "feed families first" policy ensures that children get their meals first. Kids will be happy to see fun menu options like chocolate-coated fruit; the airline guarantees that an appropriate portion of fruit or vegetables is included in every meal.

PLAN YOUR TRIP: British Airways, with either its own flights or through code shares, offers service to over 600 destinations. The airline’s main hub is in London, and it offers flights from almost every major U.S. city.

Children flying on Virgin Atlantic get their own amenity kits, designed as travel backpacks, which include baseball caps, coloring books, games, sunglasses, toys, and digital watches. Kids’ meals are served with child-size silverware, and the menu includes tried-and-true staples such as chicken fingers, pizza, and chocolate, along with a healthy side dish such as a green vegetable, fruit, yogurt, cheese string, or cucumbers and carrots, to balance things out. Like many airlines, Virgin Atlantic offers cots for babies and also offers complimentary diapers, bottles, baby foods, and changing facilities on all flights.

Insider Tip: At the London Gatwick and Manchester airports, Virgin Atlantic has V-rooms—lounges designed specifically for travelers on vacation—which include kids-only zones with TVs, snacks, video games, and other activities. At other airports (JFK, Boston, and Newark, for instance), passengers flying Upper Class can access the Virgin Atlantic Clubhouses, which are also equipped with toys and games.

PLAN YOUR TRIP: Virgin Atlantic is based at London’s Heathrow and Gatwick airports and Manchester. The airline flies between Heathrow and New York, Los Angeles, San Francisco, Washington, Boston, Miami, Orlando, Tokyo, Johannesburg, and other cities in Africa and Asia. The airline also offers service between Gatwick and several Caribbean islands.