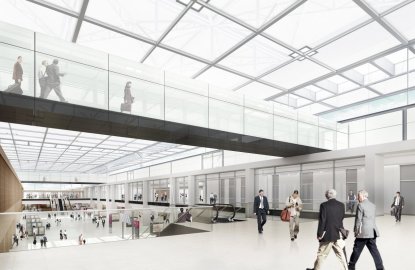 On June 3rd, more than 20 years after the fall of the wall that separated East and West Germany, travelers flying into Berlin will again unite, this time under the roof of one major international airport – the Berlin Brandenburg (BER). Once open in June, the city’s remaining two airports, which represent a period of tense division in Germany, will be shut down to air traffic. The airport is named after Willy Brandt (d. 1992), who was West Berlin’s mayor in the late ’50s and early ’60s, then Chancellor of West Germany, and a vocal proponent of the reunification during the Cold War.

The completion of the new international airport, built on the site of the former East German airport Schönefeld, has taken 5,500 workers and 2.5 billion euro. Designed by Von Gerkan, Marg and Partners Architects (gmp), the ultra-modern airport sits on 3,675 acres, is comprised of six floors, and includes an underground train station to get visitors to Berlin in under 30 minutes for three euro, as well as about 10,000 parking spaces and new roads into and out of the airport.

For the truly green visitor, the airport is also accessible via its own bike path. Once inside, recycled heat and energy systems help make for a physically and morally comfortable pre-flight experience for the eco-conscious.

"Berliners are really waiting for the new airport," said Burkhard Kieker, CEO of visitBerlin, the capital city’s tourism and convention bureau. "We say it’s one of the last missing jigsaw puzzle pieces in the resurrection of Berlin as an international mega city."

Speaking of mega, BER is also the highest capacity airport in Berlin’s history, able to accommodate upwards of 27 million travelers annually, with plans to expand that to 45 million in the future. Lufthansa and airberlin will both offer service at BER to and from destinations in Germany and Europe, as well as Los Angeles (often called Berlin’s sister city). For more information on BER and current service out of Berlin’s other airports, click here.

Thinking of a trip to Germany? For up-to-the-minute hotel and restaurant recommendations, plus the best planning advice, check out our Germany Travel Guide.