August the 13th marks fifty years since construction began on The Berlin Wall (Berliner Mauer) and even though the divider came down over twenty years ago it still manages to be one of the city’s main tourist draws. How does a structure no longer standing affect the city even in its absence? Learn about visible history with two of our favorite Berlin walking tours. 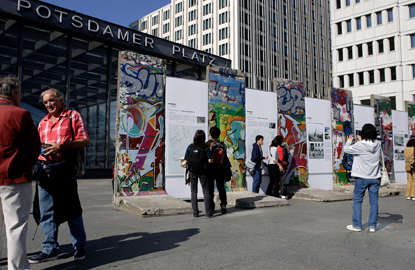 When the Wall fell on November 9, 1989, it followed massive protests, an astonishing amount of community organizing, and the prayers of thousands in both west and east, all of whom couldn’t quite believe such a momentous event was happening in their lifetimes. Many had felt the same way in 1961, when the East German government, in an attempt to keep their beleaguered citizens from leaving, built the wall practically overnight. A few sections are left standing and many special installations illuminate the effects of the Wall on the city: it cut through neighborhoods, bisected narrow streets, and sliced lives in half.Tip: Follow the cobblestones to get beyond the overly-commercialized stretches of the former Wall, like Checkpoint Charlie. Look down for a line of stones marked every so often with a metal plaque bearing the words "Berliner Mauer 1961–1989." 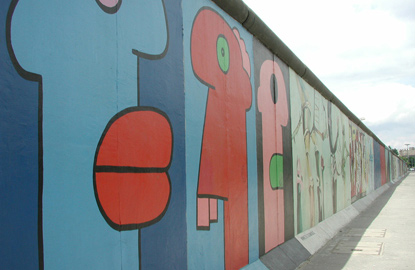 Walk One: Friedrichshain to Treptow via the Oberbaumbrücke and the Flutgraben

Starting at the East Side Gallery (pictured) cross the Oberbaumbrücke, a former border checkpoint, and turn left at Schlesische Strasse. (There’s no sign of the Wall here, as the border followed the Spree River for 500 meters.) Ubiquitous graffiti and crumbling buildings make it easy to imagine isolated Kreuzberg during the days of the Wall. Cross two small canals and pick up the trail of the Wall again at Am Flutgraben. Up ahead is the Grenzwachturm (border watchtower). Stop at the non-profit art collective Flutgraben e.V., which hosts infrequent exhibitions. Turn right to follow the Flutgraben (small canal) south until you reach an overpass, part of an elevated railway that used to lead to the pre-war train station Görlitzer Bahnhof. Now, the railway is a park connecting Treptow with Görlitzer Park, the site of the old station and a meeting point for anarchist groups and revolutionaries before the Wall fell. 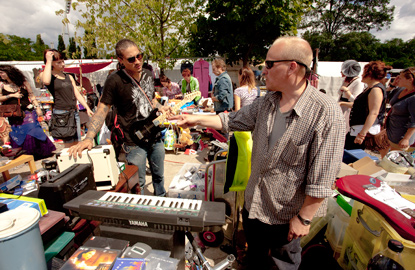 
Starting behind Nordbahnhof (S-bahn), follow Bernauer Strasse to the Gedenkstätte Berliner Mauer, located in the former "death strip," where a church was once blown up by the East because it was an obstruction to guards and a possible hiding place for those trying to flee. Follow Bernauer Strasse until you reach the corner of Schwedter Strasse, then take the path that cuts through Mauer Park (pictured). Also located in the former death strip, the park has one of the hippest flea markets in town. At the park’s northern end, Schwedter Strasse turns into the Schwedter Steg, a footbridge over an impressive chasm of connecting train tracks and S-bahn lines. Turn around for a spectacular view of the TV tower. Descend the steps on your left and continue along Norwegerstrasse. When the path goes under an imposing brick bridge, take a flight of steps up to it. This is the famous Bornholmer Brücke, where East Berliners overwhelmed the wall checkpoint and became the first to push through to West Berlin.