Since the fall of the iron curtain, no city in Europe has seen more development and change than Berlin. Divided for more than 40 years by a wall, the city became whole again in 1989, and today Berlin is poised to play a major role in the European Union. For aficionados of European capitals who’ve yet to see Berlin, now is perhaps the best time to pay a visit. The city is surprisingly affordable and tourist hordes rarely achieve the spirit-crushing levels so often encountered in Paris, London, and Rome. What are you waiting for? 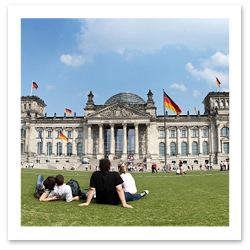 The old Cold War border has been transformed into a gleaming promenade perfect for strolling or biking. Note the eight black-and-white crosses along the railing near the Reichstag (photo, right), memorializing some of the many who were shot and killed by East German guards while attempting to escape to the West. For a bird’s-eye-view, head to nearby Alexanderplatz and ride the elevator to the observation deck of the needle-topped Fernsehturm, or television tower, once the Communist East’s monument to modernity (8.50 euros, $11.50).

Best of the Wurst

One cannot truly experience Berlin without sampling its famous fast food. Look for Imbiss (snack) kiosks throughout the city selling bouletten (fried meat balls) or the ever-popular currywurst. Berliners love this tangy combination of fried sausage slathered in curry powder and ketchup. Many locals will tell you the best of the wurst (and organic to boot) can be found at Witty’s Bioland Imbiss (Wittenbergplatz 5, Schöneberg). Thirsty? Munich may be Germany’s beer capital but Berliners love to raise a stein or three at the city’s many pubs and beergardens. Prater Beer Garden, reputedly the city’s oldest, is a good place to mix your drinking with prime people-watching.

Since the fall of the Berlin Wall in 1989, hot shot architects from across the globe have flocked here to rebuild Berlin. Tour the Reichstag, the original Parliament building, gutted and rebuilt in classical style by Sir Norman Foster and cunningly topped with a glass and metal dome (it’s free and open daily 8 a.m.-midnight). Cross the landmark Brandenburg Gate (photo, below) to Pariser Platz and duck into the lobby of Frank Gehry’s DZ Bank (Pariser Platz, 3, Mitte), where undulating metal meets glass beehive. The newly built crop of embassies offer some of the city’s best examples of modern design, notably the towering cylinder of light piercing the sandstone facade of Michael Wilford’s British Embassy (Wilhelmstrasse 70-71, Mitte) or Christian de Portzamparc’s blending of abstract and conventional styles for the French Embassy (Pariser Platz, 5, Mitte). 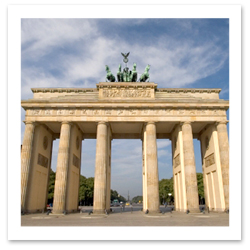 They Love the Nightlife

Does Berlin live up to its reputation as Europe’s new Fun Capital? You be the judge. There are no obligatory closing hours, so you can easily stretch your partying into the wee hours. Start at the chic Newton Bar, where Helmut Newton’s towering nude photographs line the walls. Sip the caipirinha-like house cocktail, the Absolut Newton (10 euros, $13.75). Groove till dawn with the beautiful people at Felix, an upscale dance club and restaurant. If velvet ropes aren’t your thing, you can shake it at cavernous-yet-casual Havanna, with live salsa and DJs spinning everything from merengue to hip-hop on four dance floors (Hauptstrasse, 30, Schöneberg).

Don’t leave empty handed. Berlin’s most famous shopping street, Kürfurstendamm (or Ku’damm for short), is lined with upscale shops and its wide sidewalks are dotted with cafés. Don’t miss Ka De We (Das Kaufhaus des Westens, or Department Store of the West, closed Sunday), the continent’s biggest department store and its fabulous top-floor food market and self-service restaurant. More elegant shops can be found on Friedrichstrasse in east Berlin. For a more eclectic experience, head to the Hackescher Markt area in trendy Mitte, now chock full of small boutiques.

The Past on Parade

Bone up on local history at the German Historical Museum (Deutsches Historiches Museum), which has a permanent collection of more than 8,000 objects arrayed on two floors of a former Prussian Armory. Temporary exhibits are on view at the I.M. Pei-designed extension (Hinter dem Giesshaus 3). Learn about the history of the Berlin Wall at the former border crossing at Checkpoint Charlie. The Holocaust is remembered at the incomparable Jewish Museum designed by Daniel Libeskind (5 euros, $6.90). 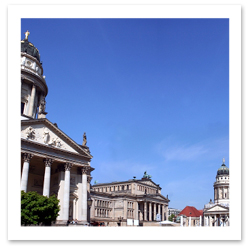 A Square to Remember

Stroll through Gendarmenmarkt (photo, right), the city’s prettiest square, anchored by the magnificent 18th-century twin-domed buildings, the French Cathedral (Franzozischer Dom) and the German Cathedral (Deutscher Dom). For a good view, climb to the dome of French Cathedral, home to a small church and the Huguenot Museum, whose exhibits trace the history of the French Protestants who fled to Berlin to escape persecution (Hugenottenmuseum, Gendarmenmarkt 5, closed Monday; 2 euros, $2.75). Between the domes sits the regal columned Schauspielhaus, built as a theater in 1871 by master architect Karl Friedrich Schinkel. Today, it is a concert hall.

A Feast for the Eyes

A center for artists of all stripes, Berlin is a treasure trove of museums and galleries. The Gemäldegalerie (Picture Gallery) has one the world’s finest collections of 13th-18th centry European art by masters including Caravaggio, Vermeer, and Rembrandt. (Stauffenbergstrasse, 40, Tiergarten; closed Monday; 8 euros, $11). Contemporary art buffs should not miss the Hamburger Bahnhof, which has an enormous collection of post-1960s Western art, with headliners like Warhol, Twombly, Rauschenberg, and Anselm Kiefer. Peruse the archaeological gems at the must-see Pergamon Museum, one of a handful of museums on Museum Island (Museumsinsel).

Walk on the Wild Side

Get to know Berlin’s most eclectic neighborhood with a walk through Kreuzberg, a hodge-podge of immigrants, bohemians, gays and late-night revelers. The squatters, punks, and anarchists who once made their homes in the forgotten eastern end have been replaced by one of the world’s largest Turkish communities. Restaurants and shops buzz around the scruffy-yet-vibrant Kottbusser Tor subway station. One of the best outdoor markets takes place here Tuesday and Friday afternoons. Not far away, the bars and clubs along and around Oranienstrasse draw weekend crowds.

Take a side trip to Potsdam, only an hour away on the S1 S-Bahn train line. Once the playground of Prussian kings, Potsdam was ravaged during World War II but has seen most of its landmarks restored. Rent a bike near the train station and head to gorgeous Sanssouci, built by Frederick the Great. Fairytale castles abound in Potsdam. The largest at Sanssouci is Neues Palais (closed Monday), designed by King Frederick himself. Stop for lunch in the old Baroque city center, or take a sunset cruise on the Havel Lakes. If you stay for more than a day, consider buying a Potsdam Tourist Card (12 euros, $16.50), with discounts at more than 30 attractions and restaurants and free public transport.