Deals Leila Najafi Attention West Coast: You Can Now Book Flights to Paris for as Little as $321
Home  >  News   >   8 Reasons to Visit Beijing 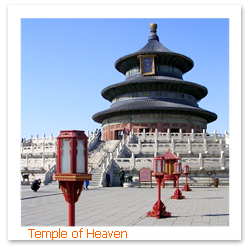 Beijing is a vibrant mix of history and modernity. Day-to-day life unfolds amid one of the world’s richest and most complex historical tapestries. From the commanding austerity of the Forbidden City to the hectic free-for-all of the markets, Beijing seamlessly moves between past and present, beckoning visitors to lose themselves in the furious pace. No traveler who sojourns here is likely to forget the experience. Although one could list a thousand reasons to visit Beijing, the sights below should move to the top of the list.

The Temple of Heaven

The Temple of Heaven is one of the best examples of religious architecture in China. Construction began in the early 15th century under the order of Yongle. The complex took 14 years to complete; it contains three main buildings where the emperor, as the “Son of Heaven,” offered prayers. The sprawling complex is a pleasant place for wandering: watch locals practicing martial arts, playing traditional instruments, and enjoying ballroom dancing on the grass.

Tip: The Temple of Heaven isn’t just a tourist sight — it’s a living, functional park. Take time to stroll around the tree-lined avenues and watch the locals relaxing in the park.

The squat tower of the Ancient Observatory is filled with primitive stargazing equipment that dates to the time of Ghengis Khan, who believed that his fortunes could be read in the stars. Sculptures adorn some of the astronomical devices on the black-brick roof of Jianguo Tower, the main building that houses the observatory. Among the sculptures are an armillary sphere, used to pinpoint the position of heavenly bodies, and a sextant, used to measure distances between stars and a celestial globe.

Tip: The astronomical instruments on the roof of the observatory are a fine juxtaposition with the skyscrapers and elevated highways in the background. This sort of contrast captures the very soul of modern Beijing. 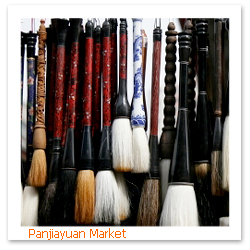 It’s hard to resist: so much to bargain for, so little time! Beijing’s markets offer a wide variety of goods, from “Maomorabilia” to silk slippers. Visit outdoor Panjiayuan (aka the Dirt Market), where some 3,000 vendors sell factory knockoffs, antiques, Cultural Revolution memorabilia, and handicrafts. For freshwater pearls, and more knockoffs, try the Silk Alley Market or the Hongqiao Market.

Tip: When bargaining for the right price, try doing so with a vendor who is alone. He is unlikely to come down on the price if there’s an audience. Also, buying more than one of something gets you a better deal.

Tranquil Confucius Temple, with its towering cypress and pine trees, offers a serene escape from the crowds at nearby Lama Temple. This is the second-largest Confucian temple after that of Qufu, the master’s hometown in Shandong province. First built in the 13th century, the Confucius Temple was renovated in the 18th century. A highlight of a visit here is the cemetery of stone tablets, with its rows of creepy crypts in the front and main courtyards of the temple. On the front stelae you can barely make out the name of thousands of scholars who passed imperial exams.

The Forbidden City has been home to a long line of emperors, beginning with Yongle, in 1420, and ending with Puyi (made famous by Bernardo Bertolucci’s film The Last Emperor), who was forced out of the complex by a warlord in 1924. The structure, which was built by more than 200,000 workers, is the best preserved and most complete collection of imperial architecture in China. Not-to-be-missed highlights include the Hall of Heavenly Purity, the Hall of Union and Peace, and the Palace of Earthly Peace. The Gallery of Treasures holds, among other things, supremely beautiful examples of imperial ornamentation and a golden pagoda.

Tip: Got a craving for java? Believe it or not, there’s a Starbucks here, in the first pavilion, just east of the Gate of Heavenly Purity. 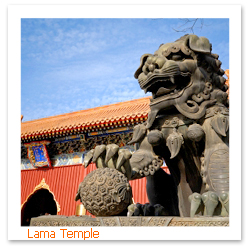 The sweet smell of incense permeates Lama Temple, one of the few functioning Buddhist temples in Beijing. When Emperor Yongzheng took the throne in 1723, his former residence was converted into this Lamaistic temple. During the Qianlong Period (1736–1795), it became a center of the Yellow Hat sect of Tibetan Buddhism. At its high point, 1,500 lamas lived here. The Hall of Celestial Kings houses a statue of the Maitreya, and the Wanfu Pavilion has a 75.5-foot-high Buddha carved from one piece of sandalwood. Do leave time to wander the Hall of Heavenly Kings. In the courtyard beyond, a pond with a bronze mandala represents paradise.

Tip: Combine a visit to the Lama Temple with the Confucius Temple and the Imperial Academy, which are a five-minute walk away, within the hutong neighborhood opposite the main entrance.

Snapshot: the Summer Palace glowing at dusk. Is there a more authentic Beijing experience? This garden complex dates back eight centuries, to when the first emperor of the Jin Dynasty built the Gold Mountain Palace on Longevity Hill. Notable sights are the Long Corridor (a covered wooden walkway) and the Hall of Benevolent Longevity. At the west end of the lake is the famous Marble Boat that Cixi built with money intended to create a Chinese navy. The palace, which served as an imperial retreat from dripping summer heat, was ransacked by British and French soldiers in 1860 and later burned by Western soldiers seeking revenge for the Boxer Rebellion.

Tip: Come early in the morning to get a head start before the coachloads of visitors arrive. You’ll need the better part of a day to explore the grounds.

Walking beneath the red flags of Tiananmen Square is quintessential Beijing. The political heart of modern China, the square covers 100 acres, making it the largest public square in the world. It was from the Gate of Heavenly Peace that Mao Zedong pronounced the People’s Republic of China in 1949. Many Westerners think only of the massive student protests here in the 1980s; in fact, it has been the site of protests throughout history.

Tip: You can access a 360-degree panorama of the square.