In the massive swath of beer-loving land between the Black Sea and the Ural Mountains, there are some truly memorable places to sample the suds. Consider this a to-do list for those among us who haven’t drunk beer in a 14th-century monastery or a Ukranian petting zoo. 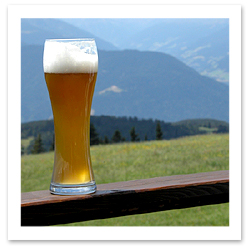 Czech Republic
Pivovarska Restaurace, Chodova Plana
The place: An underground complex of granite tunnels that has been used to age beer since the 1400s.
The beer: Tapped directly from ancient stone storage vaults, this stuff tastes like history.
The buzz: Not far from spa haven Karlovy Vary, in a city called Chodova Plana, this is a perfect post-detox destination.
Pivovarska 107, Chodova Plana (374/798-122), about 29 miles south of Karlovy Vary, near Mariánske Lazne.

Poland
Harnas, Koscieliska
The place: A tavern at the entrance to the Dolina Koscieliska, the most beautiful valley in the western Tetras mountains.
The beer: Order a domestic brew here, like Zywiec or Okocim. Poles are serious about their beer, which is crisp, flavorful, drinkable, and goes down smoother than many Belgian ales or Czech pilsners.
The buzz: The place is filled with beer-loving locals who feast on bigo, a dish made with sauerkraut, cabbage, sausage, apples, and bacon.
34-511 Koscielisko (018/207-03-54), about 65 miles south of Krakow, near Zakopan, on the road to Kiry and Witów.

Slovenia
Gostilna pri Planincu, Bled
The place: A working-class haunt that provides a snapshot into Slovenian life, with rowdy farmers packed around the bar and young lovers dining by candlelight.
The beer: The cheapest brew in town, it goes down smoothly with the restaurant’s delicious black pudding and turnips.
The buzz: For dessert, don’t miss strukli, walnut dumplings served with cream.
Grajska 8, in Bled, 31 miles northwest of Ljubljana on Hwy. E 61.

Hungary
Lake Balaton
The place: A snack bar on Lake Balaton, Central Europe’s largest lake and Hungary’s most popular summertime playground.
The beer: A gentle Hungarian pale ale, like Barsodi or Szalon, that pairs perfectly with the fried meat on offer.
The buzz: On a hot day in July or August, it seems like the entire country and half of Germany are packed towel to towel on the lake’s grassy public beaches.
Lake Balaton stretches 50 miles across Hungary. Every town along both its northern and southern shores has at least one “strand,” or beach. The north shore is 56 miles southwest of Budapest.

Romania
Carul cu Bere, Bucharest
The place: The capital’s oldest beer hall, which opened in 1880.
The beer: A very wide selection of domestic and regional beers. With main courses running from $1.20 to $6, you can afford to try each beer on the menu.
The buzz: Ambience is everything here, with stained glass, painted columns, and a winding staircase leading to balcony seats.
Str. Stavropoleos 3 (021/313-7560)

Bulgaria
Chichovtsi, Dragalevci
The place: An unassuming pizzeria off the town’s main square. It has a cozy fireplace in winter and an outdoor patio in summer.
The beer: Zagorka, a big, frosty lager with a 10 percent alcohol content that costs about a euro.
The buzz: You’ll need that delicious boozy brew to get down Chichovtsi’s pizza, which is sometimes topped with pickles. Ketchup and mayo are served on the side.
Pl. Dragalevci (02/967-17-70). From Sofia, take a taxi or Tram 19 from ulitsa Graf Ignatiev to the last stop, and switch to the Dragalevci Bus 64.

Moscow
Shinok
The place: A Ukrainian-themed farmyard that doubles as a 24-hour restaurant with roaming cows, goats, hens, and a knitting granny.
The beer: A frosty mug of Starokiyevskoye, the classic Ukrainian beer.
The buzz: Ukrainian food isn’t a world apart from Russian grub, but for a change try solyanka (kidney soup) or salo (thin slices of fat) with your beer. Go on an empty stomach, as the food and the beer can be very filling.
2a ul. 1905 Goda, Krasnaya Presnya (495/255-0204)

Valaam Archipelago, Russia
Spaso-Preobrazhensky Valaamskii Monastyr
The place: A beer kiosk on the grounds of a 14th-century monastery accessible only by ferry.
The beer: Evokes mixed feelings from resident monks.
The buzz: Walk up the hill with your beer and you’ll reach a splendid cathedral (undergoing ongoing restoration). The cathedral’s lower floor is the Church of St. Sergius and St. German, finished in 1892, and is the best preserved part. It’s a living place of worship revered by pious visitors.
Valaam is in the Russian republic of Karelia, about 105 miles north of St. Petersburg, near Finland. Overnight boat trips can be arranged from St. Petersburg. The ferry to the monastery costs 10 rubles for a round-trip ticket.