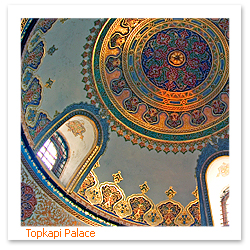 If you’ve got a passion for ruins and over-the-top palaces, consider a visit to Turkey. From top to bottom, Turkey is loaded with stunning citadels and amazing archaeological sites, from the ruins at Mt. Nemrut to the Roman city at Ephesus. You could spend a lifetime in Turkey, but if time is limited, here’s a four-day itinerary that hits the most-prized sites. Adding a couple of days in Istanbul at the beginning or end makes for a perfect trip.

Arrive in Istanbul and head to one of the small hotels in Sultanahmet. The Empress Zoe is a favorite. As rooms start at €100 per night, it’s a bargain. Leave the next day free for a visit to Topkapi Palace, which gives visitors a keen sense of how the Ottoman sultans once lived. Ancient tombs and artifacts from prehistory are on display at the nearby Archaeological Museum (Gulhane Park, next to Topkapi Palace). In the evening, head to one of the neighborhood restaurants along the Bosphorous for a fish dinner.

Take the one-hour flight to Izmir and rent a car at the airport to make the quick 50-mile drive down to Selçuk, the closest city to Ephesus. Selçuk makes an ideal base as it’s close to many of the region’s attractions. 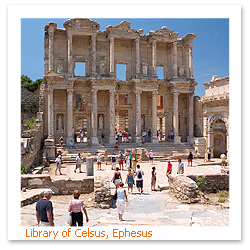 The Main Event: Ephesus is the showpiece of Aegean archaeology and one of the grandest reconstructed ancient sites in the world. Created by the Ionians in the 11th century BC, Ephesus became a powerful trading port and the sacred center for the cult of Artemis. The Ionians built a temple in her honor, one of the Seven Wonders of the Ancient World. Allow yourself one full day for Ephesus. Some of the splendors here include the two-story Library of Celsus, backed by wide steps that climb to the reading room, where you can see roles of ancient papyrus; the houses of nobles, with their terraces and grand courtyards; a spectacular 25,000-seat amphitheater; a house believed to have been a brothel; and the remains of the municipal baths. Site entry is 2.5 miles west of Selçuk on Selçuk-Ephesus Road. 232/892-6402 or 232/892-6940. $10. Open daily 8 to 5:30.

Recharge: Back in Selcuk, grab a bite at Eski Ev. The meat stew is flavorful and there’s a variety of mezes. Cengiz Topel Cad. AE, MC, V.

Hit the Hay: Catch some zzzzs at Hotel Bella, near the St. John Basilica. Some rooms have balconies and wood floors with Turkish carpets. There’s laundry service, public Internet, a gaming room, and a small library with books.

These three towns are all within 25 miles of each other. Get an early start and you can see all in one day.

The Main Event: Priene sits atop a steep hill above the flat valley of the Maeander River. A block or so along the main street is the Temple of Athena, a much-imitated trendsetter in Greek design. Earthquakes have toppled the columns, but the five that remain powerfully evoke the original design. Jog north and then east and you’ll come to the little theater, sheltered on all sides by pine trees. Scramble up a rock called Samsun Dagi to find the remains of the Sanctuary of Demeter, goddess of the harvest. This is a peaceful spot with a terrific view of Priene. 23 miles from Kusadasi, southeast on Route 515, south on route 525, west on route 09-55. No phone. $1.50. Daily 8:30 to 6. 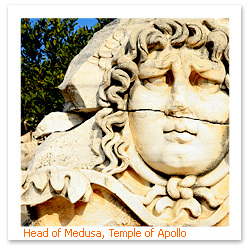 Miletus was once a great commercial center of the Greek world. The site is sprawled out along a desolate plain. The Great Theater, a 25,000-seat amphitheatre is a must-see: note that along the third to sixth rows some inscriptions reserving seats for notables are still visible. A stand of buildings marks what was once a broad processional avenue: the Delphinion, a sanctuary of Apollo; a colonnaded porch; and the foundations of a Roman bath and gymnasium. 14 miles south of Priene on Route 09-55. No phone. $1.50. Tuesday through Sunday, 8:30 to 6.

Didyma is famous for its Temple of Apollo. As grand in scale as the Parthenon — it measures 623 feet by 167 feet — the temple has 124 well-preserved columns, some still supporting their architrave. Beneath the courtyard is a network of underground corridors. The temple was later excavated by French and German archaeologists. Its statues are long gone, hauled back to England in 1858. Still, fragments of bas-reliefs on display by the entrance to the site include a gigantic head of Medusa and a small statue of Poseidon and his wife, Amphitrite. 14 miles south of Priene on Route 09-55. No phone. $1.50. Daily 8:30 to 6.

Recharge: Located next to the water, at the end of the pier, Kamaci 2 has a great selection of fish dishes and the prawns are a great appetizer. Yali Cad. Iskele Karsisi, Altinkum-Didyma. 256/813-2349. AE, MC,V.

Hit the Hay: You’ll find Medusa House Pansiyon ready-made for relaxation — the garden and terrace are great for quiet contemplation. Next to the Temple of Apollo, this is one of Didyma’s nicest accommodations. 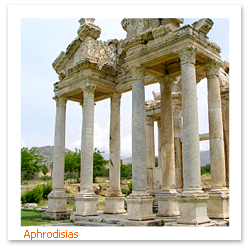 The city of Aphrodite, goddess of love, is one of the largest and best preserved archaeological sites in Turkey. Though most of what you see today dates from the 1st and 2nd centuries AD, archaeological evidence indicates the dedication to Aphrodite has a long history of veneration of pre-Hellenic goddesses.

The Main Event: The beauty of Aphrodisias is in its details, and a good place to start taking them in is the site museum, just past the ticket booth. The museum’s collection includes several impressive statues from the site, among them one of Aphrodite herself. Pick up a guide and a map — you’ll need them, as the signage is poor.

From the museum, follow the footpath to the right, which makes a circuit around the site and ends up back at the museum. The Tetrapylon is a monumental gateway with four rows of columns and some of the better remaining friezes. The Temple of Aphrodite was built in the 1st century BC on the model of the great temples at Ephesus. Its gate and many of its columns are still standing; some bear inscriptions naming the donor of the column. Next to the temple is the fine Odeon, an intimate, semicircular concert hall and public meeting room. Farther on is the stadium, which was once the scene of footraces and wrestling matches. The theater, built into the side of a small hill, is still being excavated. Its 5,000 white-marble seats are simply dazzling on a bright day. The adjacent School of Philosophy has a colonnaded courtyard with chambers lining both sides. 50 miles from Pamukkale, west on E87 and south on Route 585 at town of Kuyucak. $2.50 site; $2.50 museum. Open daily 8:30-5 p.m.

Recharge: Most restaurants in Pamukkale are rather touristy and don’t have a lot to offer, but you can eat at one of two restaurants at the Polat Thermal Hotel (see below).

Hit the Hay: The rooms at Polat Thermal Hotel are clean and spacious and offer a full range of facilities. Furnishings are plain but comfortable, but there is a large outdoor hotel. Karahayit, Denizli 20227. 258/271–4110.