Deals Leila Najafi Attention West Coast: You Can Now Book Flights to Paris for as Little as $321
Home  >  News   >   Beating the Euro in Paris (and the Rest of France)

Beating the Euro in Paris (and the Rest of France) 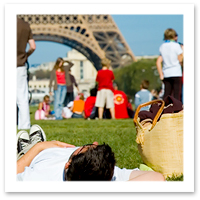 “There is value in treating Paris as a destination, rather than as a place which contains a number of destinations…time spent wandering in the city can be every bit as enjoyable as visiting great museums and galleries. Why has French given us such words as boulevardier and flaneur if strolling in Paris is not a pleasure?” — Padraig

Heading to France this summer but not sure you can afford it? Check out these travel-budget tips from the value-minded travelers on Fodor’s Travel Talk Forums.

Are you a thrifty Francophile? Share your tips for discovering the country’s best for less.

1. “On a Sunday morning take the métro to the Place des Fêtes, pick up picnic items at the market on the square, walk down to the top of the Parc des Buttes Chaumont and join the Parisians on the grass who are also having a picnic.” — Michael

2. “Watch for new train routes opening up from Paris and plan a trip around “introductory” prices for the new routes. Trains can be a low cost and comfortable means of point to point travel in France.” — DeborahAnn

3. “Basically, people who stay farther from the center are not only spending much less money, but they are seeing a lot more of the city. People in “outer” Paris will always go into the center to see the usual tourist attractions, but a lot of the people who are already staying in the center will not necessarily venture to outer neighborhoods to see different aspects of Paris.” — kerouac

4. “We have found that a rental car frequently turns out to be cheaper for two people than taking the train. If you drive, be sure to get a really good Michelin map for the area.” — julies

5. “If you’re staying longer than 17 days, lease a new car, it’s usually cheaper than a rental. We did 7 weeks in Europe, France included, in the spring of 2006, the off season, for around $150 a day, not including the car lease and air fare.” — dgassa

6. “Get to understand the Department system in France and then google for the offical Department tourist office web site which will house all the local hotels and gites.” — bilboburgler

8. “If you are staying in self-catering accommodation in Paris, don’t shop for groceries in Monoprix – it’s expensive. Instead find your local Franprix or Leaderprice, or hunt down a branch of ED l’Epicier (less common in central Paris than in the outer arrondissements) for super-cheap (non-branded) foodstuffs..” — hanl

9. “One of the worst deals in Paris is the typical French breakfast in a hotel. But if you have the capacity, a full buffet breakfast can be one of the best deals. I often have a large breakfast followed by no lunch or a little snack, and get through to dinnertime. So, when booking hotels, I look out for packages that include a buffet breakfast.” — Padraig