To see Barcelona after an 18-year absence is to see an entirely new city. Thanks to a boom in tourism, commerce, and architecture that dates back to the 1992 Olympics, the Catalan capital has reclaimed its status as a city of international style and progressive culture. The narrow alleys of Barcelona’s older quarters still beguile visitors, and the remains of its early-20th-century glamour still give the city a flair for the dramatic. But now architects like Richard Meier and Herzog & de Meuron are remaking the urban skyline, and a new contemporary art museum draws visitors with internationally acclaimed exhibitions. Even if you think you’ve seen Barcelona, it’s time to see her again.

Ever since the 1992 Olympics drew a flood of development funding, Barcelona has been dedicating its public spaces to design and architecture. Dramatic buildings and large-scale art works dominate the cityscape, often anchoring neighborhood transformations. 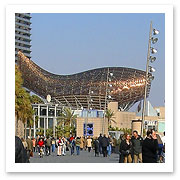 Barcelona’s entire waterfront area got a makeover at the time of the Olympics, with new promenades, shopping areas and public spaces. A Frank Gehry-designed fish (pictured right) gleams above Port Olímpic, although the towering metallic canopy is best photographed from a distance (at close range it looks more like a giant woven wimple). Spend some time at one of the tapas bars of the gentrifying Barceloneta neighborhood before continuing your walk past a giant sculptural face (designed by pop artist Roy Lichtenstein) and on to the Rambla de Mar, the planked bridge that connects the giant Maremagnum mall to the Mirador de Colón, the monument at the base of La Rambla. 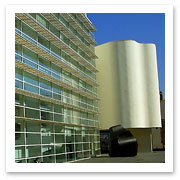 On a sunny day, the stark white facade of the Richard Meier-designed Museu d’Art Contemporani de Barcelona (pictured right) reflects a blast of light into the Plaça dels Angels (metro Universitat or Catalunya), at the heart of the up-and-coming El Raval neighborhood. Inside, a long ramp guides visitors past three floors of galleries; rotating exhibitions include selections from MACBA’s collection, which includes works by not only Catalan artists like Joan Miró and Antoni Tapies but also international art stars like Larry Rivers and Marcel Duchamp. 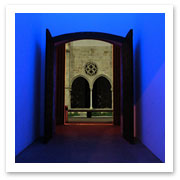 For a more intimate artistic encounter, visit the installation Deuce Coop (pictured right), a creation of the Los Angeles-born artist James Turrell. The installation lights up a passageway in a former monastery (Comerç 23, metro Arc de Triomf), a typical setting for a work by this most spiritual of artists. The meditative, glowing space, transformed by colored light and marked by one of Turrell’s signature oculi, frames the entrance to the ancient courtyard. (Turrell’s installation is dangerously close to the enticing Museu de la Xocolata, at Comerç 36, which offers up a sampling of chocolate’s history and its cultural role; naturally, there’s a gift shop where you can get a taste for yourself.) 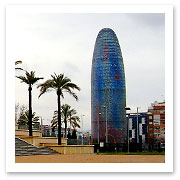 Other new additions: In the Sant Pere neighborhood, a run-down market square has gotten a boost from the newly renovated Mercat Santa Caterina (Avinguda Francesc Cambó, metro Jaume I). The rippling, pixelated roof shows off a rainbow of color, while the market’s interior space feels light and elegant. The colors are similarly riotous on the cigar-shaped Torre Agbar (pictured right), a commercial skyscraper completed in 2004 at Plaça Glòries Catalanes (metro Glòries). On the other side of the roundabout, the new Teatre National de Catalunya (Plaça de les Arts 1) frames a glass box with classical Roman columns. 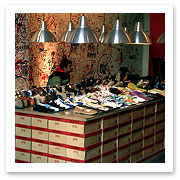 The city’s new style is on view not only in its buildings but in its streets as well, with shops offering a hip, chic mix of modern designs. For the freshest action, head downtown to rapidly gentrifying El Raval; you can start exploring on Carrer Elisabets, just off Plaça dels &Agrave’ngels. Spanish shoe emporium Camper (pictured right) sells its funky footwear at the head of the street, opposite MACBA; down the street, the retailer also operates a boutique hotel (Casa Camper) and a quirky concept cafe (FoodBall, where lunch menus include spherical appetizers and sweets). 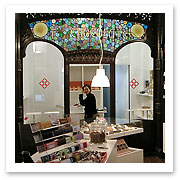 A few blocks away, Carrer Riera Baixa holds a cluster of shops offering vintage and vintage-inspired clothing. My favorites included Amateur (No. 16) and Erreté (No.10), both of which have a funky selection of small-batch clothing and accessories, but shoppers also flock to Lailo (No. 20) and Holala (No. 11). Closer to La Rambla, Xocoa (Carme 3, pictured right) sells stylish gourmet chocolates in a lush, art nouveau shop that dates from 1890; neighboring Cereria Mas (at the same address) sells nothing but candles, in a dizzying range of shapes and styles. 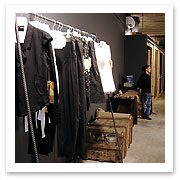 On the other side of the Barri Gòtic, the swankier El Born neighborhood, near Museu Picasso, has a mix of fashion and accessories amid its narrow passageways. (Best access to the area is from the Jaume 1 metro stop.) Designer Miriam Ponsa (Princesa 14, pictured right) offers elegant, minimalist, softly deconstructed looks for women (and sometimes, depending on the season, for men as well). Etxart & Panno (on a tree-shaded square at Passeig del Born 14) has more colorful fashion from local designers.

More traditional luxury shops can be found on and around broad Passeig de Gràcia, although a lot of the boutiques are international brands: Just the two blocks from Carrer de Valéncia to Carrer de Provença are home to Louis Vuitton, Chanel, Armani, Escada and Bulgari. More unusual is the perfume museum tucked into the back of the Regia boutique (Passeig de Gràcia 39); for a 5-euro fee, a shop employee will turn on the lights and let you loose among shelves densely lined with scent bottles old and new. 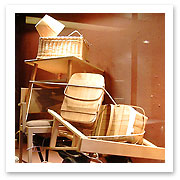 Another Barcelona icon, located near the top of the boulevard, is the sprawling Vinçon furniture store (Passeig de Gràcia 96, pictured right), which offers witty, ultra-modern home furnishings in an ornate 1898 villa. The second floor features iconic modern furniture, a stunningly designed fireplace, and a patio that looks onto the rear windows of La Pedrera, the Gaudí-designed apartment building next door. The ground floor includes children’s goods, lighting, books, and decorative accents and a drool-worthy kitchen department.

At just about any hour of the day or night, Barcelona’s residents and tourists mingle on La Rambla to stroll, shop, or socialize. The long promenade, which extends from Plaça Catalunya to the sea, is in many ways the heart of the old city, and teems with bird markets, press kiosks, street performers and, unfortunately, ripoff artists. (Enjoy the action, but keep close tabs on your wallet.) 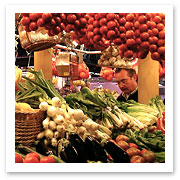 While on La Rambla, be sure to stop at the bustling Mercat de la Boqueria (near metro Liceu, pictured right) to catch the city’s foodies stocking up on produce, meat and cheese; inside the market, to the right of the entrance facing La Rambla, is corner cafe Pinotxo, known for its tasty tapas.

The collection at the Museu Picasso (Montcada 15-23, metro Jaume 1) focuses on pieces with a connection to Barcelona (so don’t expect to see much from the artist’s Rose Period here). On the other hand, despite the gaps, the collection serves to remind visitors that Pablo Picasso did in fact master all the rules of painting before he set about breaking them; portraits dating from his early teens show a startlingly precocious talent at work.

Antoni Gaudí’s signature curves define the Barcelona cityscape; his sinuous interpretations of modernisme, the Spanish answer to Art Nouveau, can be found all over the city. His most enduring contribution—if it’s ever finished—may well be the Sagrada Família (Mallorca 401, metro Sagrada Familia), a grand cathedral under construction since the late 19th century. 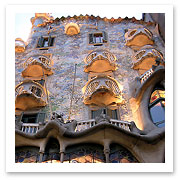 Passeig de Gràcia is home to two of the architect’s wild residential creations: the delicately ornate Casa Batll&oacute (near Carrer Aragó, metro Passeig de Gràcia, pictured right); and the whimsical (but rough) La Pedrera, which offers a small museum dedicated to Gaudí’s work as well as access to one of the building’s apartments (at the corner of Provença, metro Diagonal, or just walk up from Casa Batllò).

If you still haven’t gotten your Gaudí fix, head up into the hills above the city to visit Parc Guell (metro Lesseps or Vallcarca), which is filled with fanciful, undulating shapes tiled to within an inch of their life. 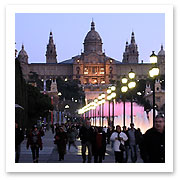 At the other end of town, the hilltop area of Montjuïc (pictured right) contains another cluster of classic Barcelona destinations, including the Fundació Joan Miró, with an extensive collection of the Catalán artist’s work, and the imposing Museu Nacional d’Art de Catalunya, occupying the former national palace. (To summit the hill, you can make the imposing trip up the grand staircase from the metro station at Plaça Espanya, or take the funicular ride up from metro Parallel.) Montjuïc also contains one pair of late-20th-century additions: the city’s grand Olympic stadium and the stylish swimming complex next door.

All photos by Rachel F. Elson