News Larry Bleiberg You Can Finally Look Inside This Stunning D.C. Landmark. But Only for Another 25 Days
Home  >  News   >   Barcelona or Madrid: Choose a Spanish Adventure

Madrid or Barcelona? That’s a question readers often ask us when planning a trip to Spain. Do you take in Madrid’s capital culture in the Spanish heartland of Castile-La Mancha, or visit Barcelona’s hip Catalan city by the sea? Decisions, decisions. Here, with an eye toward aiding the hopelessly lost, we’ve pulled together a short list of things that reveal the very different characters of these two great cities.

Madrid: Most of the world calls it a sport, but in Spain — and especially in Madrid — bullfighting is considered an art. And nowhere in the world is bullfighting better than at Madrid’s Las Ventas on Calle Alcala, in Salamanca. Come in May, during the three weeks of consecutive daily events that mark the feast of San Isidro.

Barcelona: Barcelonins are picky eaters, and if there is one place in the city that caters to picky eaters it’s the Boqueria (also known as the Mercat de Sant Josep), an explosion of life, color, and food set within a steel hanger in the Rambla neighborhood. 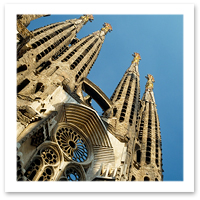 Barcelona: Some love it, some hate it, but most everyone who knows anything about art agrees that Antonio Gaudi’s La Sagrada Familia (photo, right) is the crown jewel in Barcelona’s treasure trove of Moderniste (Art Nouveau) landmarks. The unfinished cathedral is a symbol of Barcelona, and a testimony to the city’s singular personality.

Madrid: When it was commissioned in 1785, the Prado was meant to be a natural-science museum, but by the time the building was completed in 1819 its purpose had changed to exhibiting the art collected by Spanish royalty since Ferdinand and Isabella. Expect to be wowed by masterpieces by Velazquez, El Greco, Francisco Goya, and Flemish, German, French and Italian artists.

Madrid: When it comes to sampling Spanish cuisine, you’ll find no end of hearty heartland fare in Madrid but also a wide array of crowd-drawing tapas bars. For the best tapas in Madrid, reserve a spot (two or three days in advance) at Laredo(Menorca 14; 01/573-3061) in the Retiro neighborhood. The nine tables here are some of the most sought-after in the city.

Barcelona: The Mediterranean diet — based on olive oil, seafood, vegetables, onions, garlic, and red wine — is firmly at home in Barcelona, but if you’ve come all this way, why not sample Barcelona’s newly emerged La Nueva Cocina (Molecular Gastronomy). At postmodern and edgy Manairó (Diputació 424, Eixample), chef Jordi Herrera is clearly pushing for culinary enchantment.

Madrid: It’s pricey, but for the best flamenco in Madrid, the Café de Chinitas is the place to be. The dancing here is deeply rooted in Andalusian tradition. You’ll want to reserve a table, because shows, which begin at 10 p.m., sell out. Dinner is served beginning at 8:30, but you’re welcome to come just for drinks and the show.

Barcelona: Locally pronounced “Pen-dow,” Up and Down has been a classic for well-heeled Barcelona party animals for more than 30 years, and it’s still kicking out the jams. The club is so named for its two separate spaces, one downstairs for younger carousers and one upstairs for more mature and accomplished night owls. 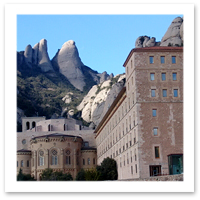 Barcelona: A favorite side trip from Barcelona is a visit to Montserrat (photo, right), 50 miles west of Barcelona. The dramatic, sawtooth peaks here have given rise to countless legends. Indeed, this is where St. Peter left a statue of the Virgin Mary carved by St. Luke, where Parsifal found the Holy Grail, and where Wagner sought inspiration for his opera based on the Parsifal legend. Montserrat is as memorable for its strange pink hills as for its religious treasures, so be sure to explore the area. The views of the Mediterranean and the Pyrenees are breathtaking.

Madrid: All roads lead to Toledo when it comes to day-tripping from Madrid. Long the spiritual capital of Spain, Toledo, about 44 miles southwest of Madrid, is perched atop a rocky mount with steep ocher hills rising on either side and is bound on three sides by the Tagus River. The Moors came in the 8th century and solidified the city’s reputation as a center of religion and learning. The town’s Moorish legacy is evident in Toledo’s strong crafts tradition, the mazelike arrangement of the streets, and the predominance of brick rather than stone. Visitors enjoy winding through the medieval trappings, visiting such sites as the Gothic cathedral inspired by Chartres, and the Chapel of Santo Tomé, where you can see The Burial of Count Orgaz, a masterpiece by one-time Toledo resident El Greco.