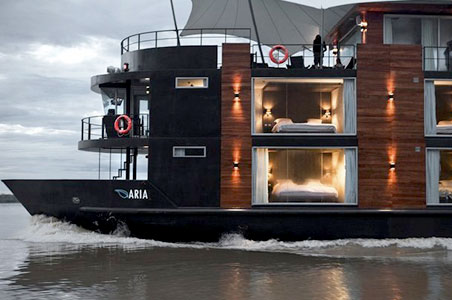 Spanish conquistador Francisco de Orellano was the first explorer to sail the length of the mighty Amazon River and now, 471 years later, you can follow part of his path with new cruise tour options. Avalon Waterways enters this market with a 10-night expedition, From the Incan Empire to the Peruvian Amazon, aboard M/V Aria with departures throughout 2014.

The tour begins with a three nights in Lima, Peru, and includes extensive guided sightseeing. After a flight to Cusco in the southeast near the Urubamba Valley of the Andes, travelers will explore the city before descending into the Sacred Valley of the Incas, the archaeological site of Kenko, the walled city of Sacsayhuaman, and breathtaking Machu Picchu known for its 15th-century Incan ruins. From there, the group flies to Iquitos, the largest city in the Peruvian rainforest, to join M/V Aria on the Amazon River for a 4-day/3-night voyage.

Wildlife is the main reason for visiting the Amazon. Gray and pink dolphins will swim alongside your vessel and shepherd you down the river where birding is impressive. Sightings may include kingfishers, falcons, parrots, terns, sandpipers, parakeets, macaws, and harpy eagles—among other species. In the rainforest you’ll happen upon long-nose bats, three-toed sloths, red howler monkeys, and cute squirrel-size tamarin monkeys. On the water, be on the lookout for piranha, caimans (alligatorid crocodylians), and endangered manatee.

The magic of the flora is another major draw of this itinerary. Imagine finding humongous water lilies that grow up to six feet in diameter. You’ll find them in the Amazon. In fact, the rainforest here is home to approximately 1,400 different species of plants and 700 types of trees—many of which are enormously tall. The high canopy of the Amazon rainforest is still a mystery in many ways and researchers are continually discovering new species of birds and insects that can only be found in that canopy.

In addition to enjoying the flora and fauna of the Amazon, you’ll meet local villagers and interact with fisherman along your route that includes time in Peru’s Pacaya-Samiria National Reserve.

The luxury riverboat, M/V Aria, was custom built for Aqua Expeditions and Avalon Waterways charters it for its own expeditions along the Amazon. The ship accommodates 32 passengers and features 16 oversize suites with floor-to-ceiling picture windows. Naturalists lead expeditions via motorized skiffs and kayaks and take guests on hikes through the rainforest. Onboard cruisers enjoy lectures about nature and history and can also spend some time in the Jacuzzi or sip a cocktail in the lounge. The Amazon may be mighty but Aria affords every comfort you’ll need, including complimentary wine with meals that range from Peruvian to haute cuisine, a stargazing program, and a variety of shore excursions. The inaugural voyage of Avalon’s new Amazon adventure starts in Lima on February 15, 2014.