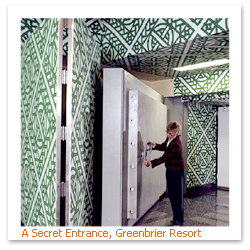 Eager to learn about American history on your summer vacation? How about a trip to Boston to see the Bunker Hill Monument? Or you could visit a very different sort of bunker, like the one built by the U.S. government in the early 1960s underneath the Greenbrier Resort in West Virginia. These odd digs were one of many facilities built in the U.S. during the Cold War, America’s mid-20th-century tussle with the Soviet Union and its satellite nations. Few people know about the legacy of launch sites, bunkers, and secret test sites the U.S. government created during this era, but they do exist and are as American as apple pie and Monticello. So if you want to see how U.S. tax dollars were being used at the end of the last century — a legitimate historical concern — add these stops to your American history itinerary.

Emergency Relocation Center,
Greenbrier Resort, White Sulphur Springs, West Virginia
In the 1950s, the U.S. government funded a top-secret project to relocate Congress in the event of a nuclear attack. Thus was born the Secret Emergency Relocation Center, a 110,000-square foot bunker, built underneath luxurious Greenbrier Resort. The $86 million shelter, which became operational in 1961, could hold up to 1,000 people and was constructed of reinforced-steel concrete 64 feet beneath the west wing of the hotel. The shelter’s 25-ton doors were designed to withstand a nuclear explosion. Among other things, the shelter includes a hospital and a TV studio with a backdrop of the Capitol building, so that broadcasts made from the shelter looked like they were being made from the nation’s capital. Greenbrier was closed in the early 1990s after a Washington Post article revealed the secret. Today it is a storage space for the Greenbrier.

The Titan Missile Museum
Tucson, Arizona
During the Cold War, Tucson was ringed by 18 of the 54 Titan II missiles that existed in the U.S. After the Salt II treaty with the Soviet Union was signed in 1979, this was the only missile-launch site left intact. A National Historic Landmark today, the Titan Missile Museum makes for a sobering visit. Guided tours, running every half hour, last about an hour and take you down 55 steps into the command post, where a ground crew of four lived and waited. Among the sights is the 103-foot-, 165-ton, two-stage liquid-fuel rocket. Now empty, it once held a nuclear warhead with 214 times the explosive forced of the bomb that destroyed Hiroshima.

Nike Missile Site SF88L
Marin County, California
From the 1950s til the mid 1970s, many American cities unwittingly played host to Nike missiles bases, military installations that contained guided missiles. At the height of the Cold War, there were almost 200 Nike bases around the country. The missiles became obsolete as nuclear technology became increasingly sophisticated. The bases were closed in the mid 1970s, but Cold War buffs can see a real Nike base at the Nike Missile Launch Area SF88L, at Fort Barry, in San Francisco Bay’s Marin Headlands. The site includes, among other things, underground “magazines” with launch platforms, control stations, and unarmed “Hercules” missiles. 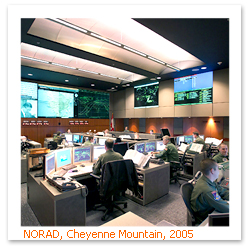 Tucked away deep inside Cheyenne Mountain, on the southwest side of Colorado Springs, is this labyrinthine underground combat base, built in the mid-1960s to provide the U.S. with a nuke-proof place where they could scan the skies for incoming ICBM warheads. Later, the facility was used for patrolling orbiting spy satellites. Designed to withstand a nuclear blast of several megatons, the center has 25-ton blast doors and rests on thousands of springs meant to absorb the shock of a nuclear blast. A warren of tunnels bored into the granite connect the center’s various buildings. The space used to house NORAD (North American Aerospace Defense Command), which is now based on a nearby Air Force base.

Visiting: Public tours stopped after September 11, 2001 but may resume in the future.

Kimball County
Kimball, Nebraska
This sparsely populated region of southwestern Nebraska is known among Cold War types as the “missile capital of the world.” That’s because in the early 1960s 200 ICBM missiles were dug into the ground here in missile silos. The area was optimal, presumably, because it is as flat as a pancake and largely unpopulated.

Visiting: Not likely. The missile silos, now empty, are on private land. You can, however, see a Titan 1 missile up close in Gotte Park, in downtown Kimball (intersection of Highways 71 and 30).

If you’re chatting on your cellphone while driving around Waynesboro, on Route 16, and your phone dies, it’s probably because you’ve encountered the radio-jamming technology used by the Raven Rock Command Center, sometimes referred to as Site “R.” The center, built not long after the Soviet Union exploded its first big nuke in 1949, was designed to be a backup command center for the military in the event of all-out nuclear war. It consists of several buildings (connected by tunnels) burrowed deep inside Raven Rock Mountain. Supposedly big enough to hold up to 5,000 occupants, the site encompasses extensive living quarters, a dining facility, VIP areas, a hospital, and a barber shop (no beauty parlor?). In addition to being a backup command center for government honchos, Site “R” has been the center of telecommunications activities since it opened, which explains why your phone won’t work if you’re in the area.

Visiting: Site “R” is about 10 miles west of Waynesboro on Route 16. There are no signs, but you’ll know you’re getting close when you see communications towers looming over the trees. You’re not likely to get any closer.