Santa Fe will host its 93rd annual Burning of the Zozobra on September 1.

Picture this: a glowering 50-foot marionette moans and thrashes violently as a crowd of more than 50,000 people chant in unison, “Burn! Burn!” Gloomies (children dressed as ghosts) parade around as villagers light bonfires threateningly close to the effigy. A fire dancer battles the monster with blazing torches in a carefully choreographed dance as fireworks explode in the sky above. The marionette wails louder and louder as fire spews from its eyes and mouth. The crowd erupts into cheers as the monster is finally engulfed and devoured in a sea of flames.

You could be forgiven for thinking this is the stuff of nightmares, but the scene described is just Santa Fe’s annual Burning of the Zozobra, a boisterous event that symbolizes the release of gloom and anxiety from the previous year. The event takes place the Friday before Labor Day and kicks-off the Fiesta de Santa Fe, an annual celebration that immortalizes the capital’s resettlement by Spain’s Don Diego de Vargas in 1692.

While Fiesta has been observed in Santa Fe since 1712, the burning of Zozobra, also referred to as “Old Man Gloom,” wasn’t introduced until the 1920s. Santa Fe artist and World War I veteran William Shuster, Jr. is credited with crafting the original Zozobra.

The creation of Zozobra sprang from two separate events in Shuster’s life. Once while traveling through Mexico, Shuster witnessed the Yaqui Indians burning an effigy of Judas in a religious ceremony. On another occasion, after a bout of drinking at the bar in the historic hotel La Fonda, Shuster urged his despondent friends to write their woes on napkins and burn them in a symbolic act to rid themselves of their troubles.

Shuster was inspired to create a lighthearted ceremony that would bring the Santa Fe community together and provide relief from the somber and religious atmosphere of the traditional Fiesta celebration. Thus the Burning of Zozobra was born in 1924. After a sustained and overwhelmingly enthusiastic response from the public for Shuster’s creation, the Fiesta Council eventually combined the events.

Shuster’s mythology depicted Zozobra as a bogeyman hiding in the mountains outside of Santa Fe, reborn each year from the accumulation of malicious and inhumane deeds. In an attempt to lure him from the mountains, city leaders invited Zozobra to Fiesta. Driven by a desire to wreak havoc on the city and ruin Fiesta, Zozobra accepted. 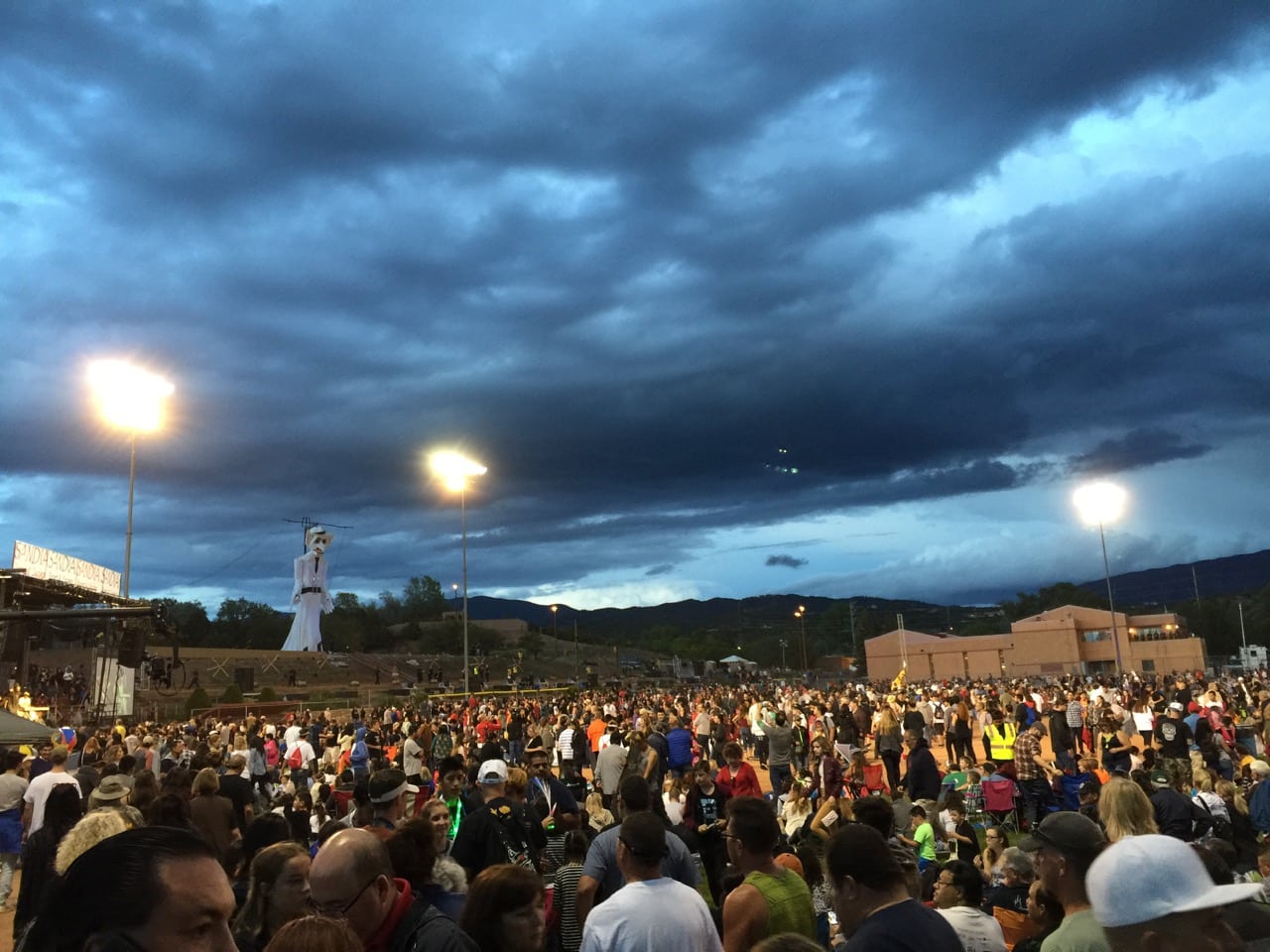 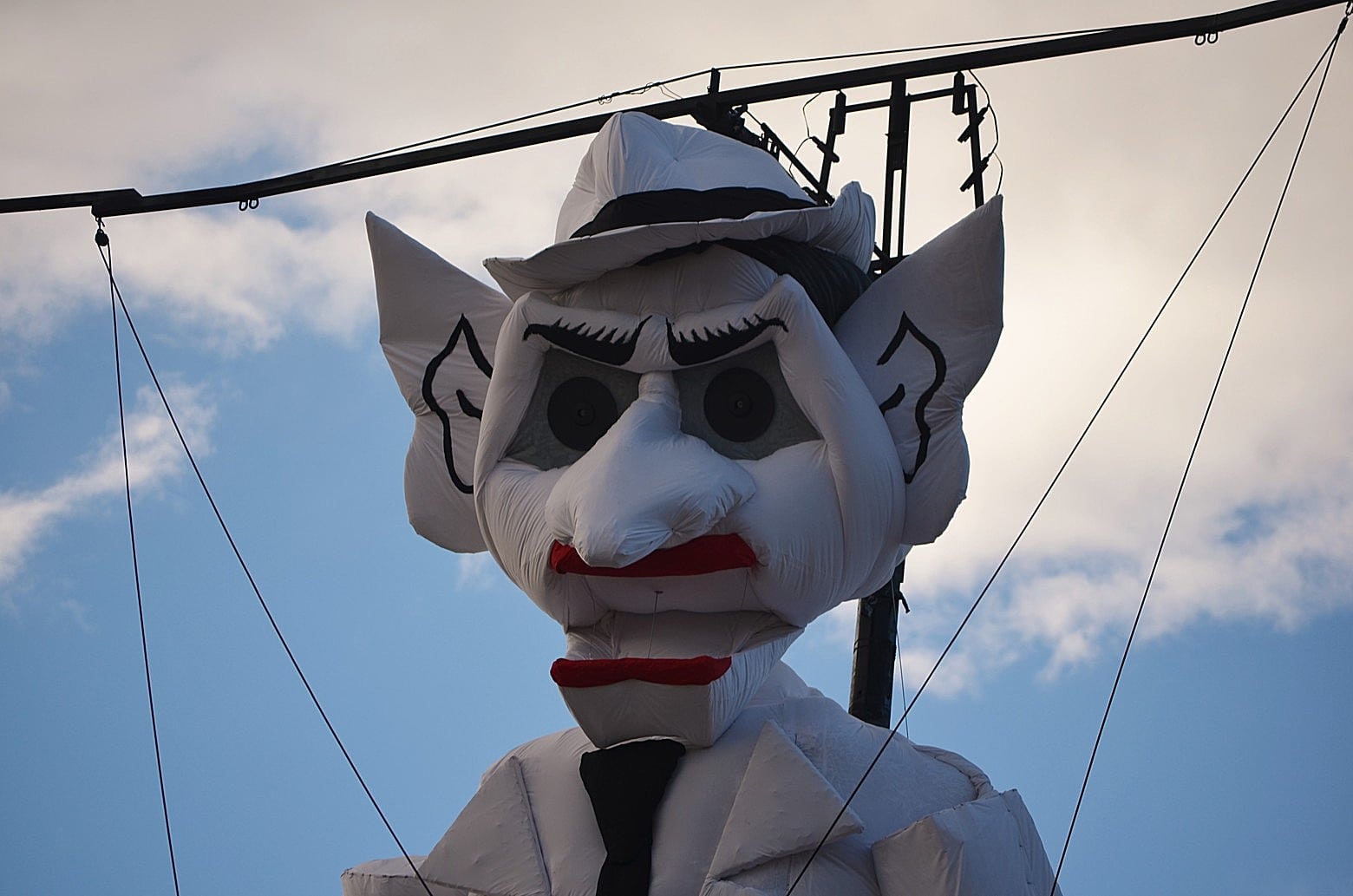 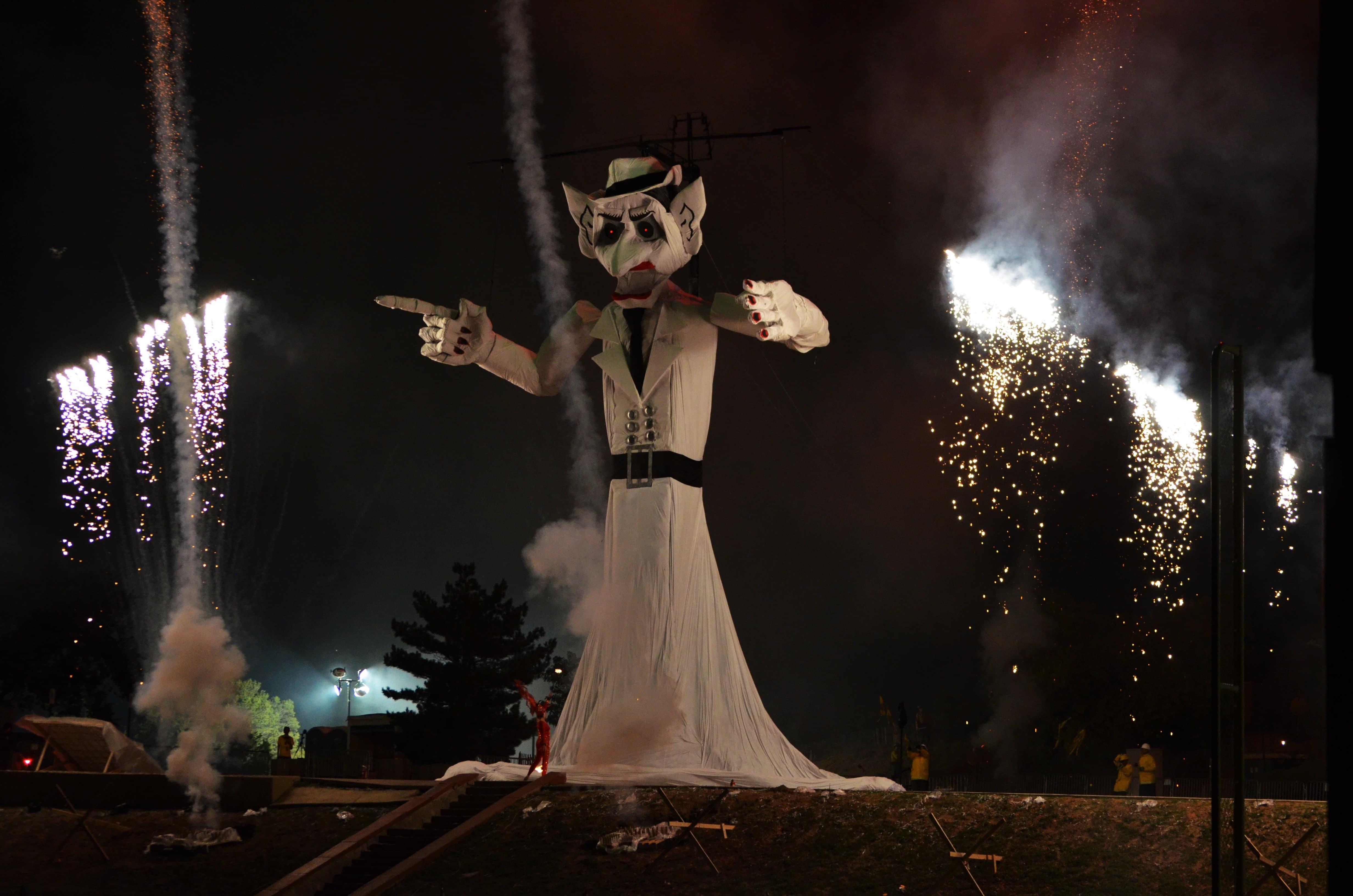 Upon arriving at the festival, Zozobra knocked the park into darkness and turned Santa Fe’s children into the joyless and hopeless spirits called Gloomies. The townspeople threatened Zozobra with bonfires, snapping the Gloomies out of their spell, but were unsuccessful in stopping the villain. By relying on their collective goodwill, the people of Santa Fe were able to summon the Fire Spirit to challenge Zozobra. In a climactic battle, the Fire Spirit defeated Zozobra by setting him on fire, which allowed the city to celebrate Fiesta with hope and happiness.

In 2024, Zozobra will mark its 100th year. The Kiwanis Club, who received rights to Zozobra from Shuster in the 1960s, started celebrating the centennial in 2014 with the “Decades Project,” a way to honor each successive decade that Zozobra has been present by depicting the effigy in the style of the time. This year, Old Man Gloom will be dressed in a tribute to the 1950s. 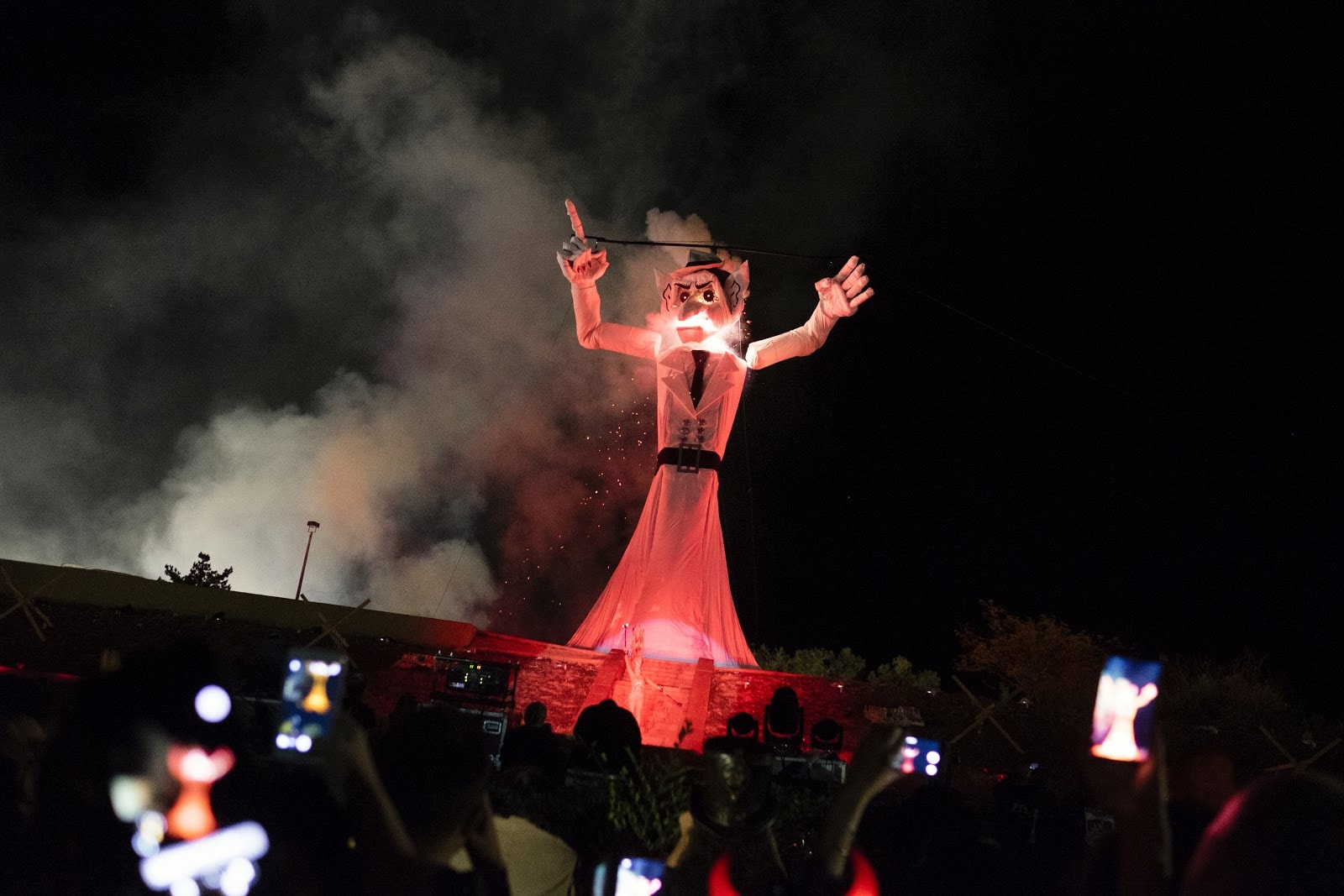 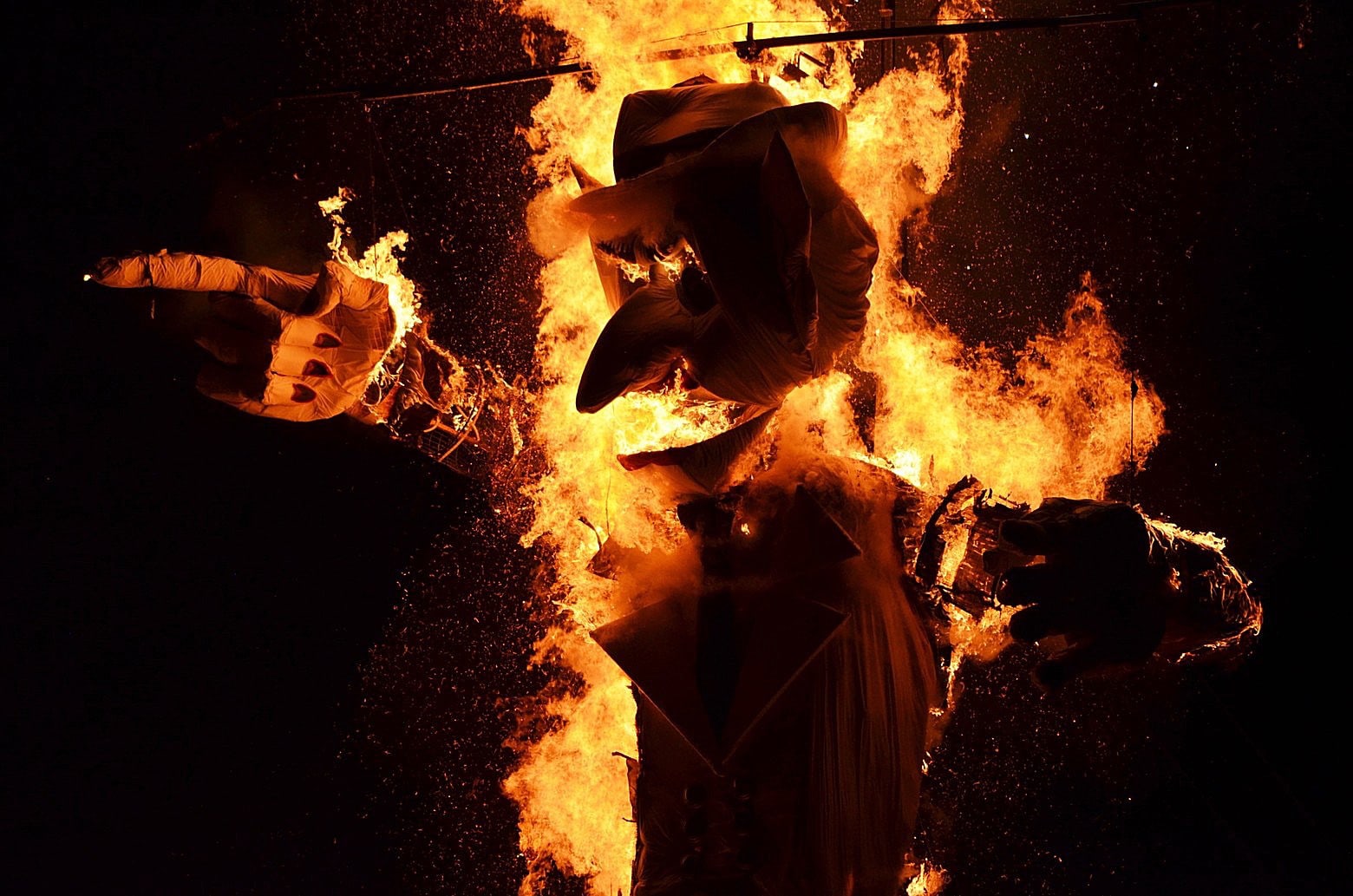 Originally only 6 feet tall, today the puppet weighs nearly 2,000 pounds and is constructed of wood, wire, and shredded paper. During assembly, Zozobra is stuffed with old love letters, traffic tickets, divorce papers, arrest warrants, and any other item that has brought sorrow to the people of Santa Fe. One year the effigy even included a guitar.

The event is more than just a creepy spectacle to keep you up at night. It’s a day for the community to come together and spend time with family and friends. It’s also a deeply personal event, offering attendees the chance to reflect on the past year, rid themselves of worry and anxiety, and wipe the slate clean. There are even tryouts for the highly coveted roles of the Gloomies and torch-bearing villagers.

The 93rd annual burning of the Zozobra will take place on Friday, September 1, 2017 at Santa Fe’s Fort Marcy Park. Gates open at 3 p.m. and visitors are invited to bring a picnic and relax on the lawn (though coolers are not permitted on the field). Over 20 different food and drink vendors will also be available, serving delicacies like roasted corn, burritos, and turkey legs. Starting at 7 p.m., live music begins with headliner Los 5. At 9 p.m., the “Beach Ball Song” starts when nearly 500 beach balls are thrown into the crowd as Top 40 hits play. The show really begins at 9:30 p.m., when the park’s lights go out and the burning commences.