The spiritual photographer is inciting a cult following has fans in JJ Abrams, Hans Zimmer, and the Ritz-Carlton.

To be fair, Trey Ratcliff has never called himself a photography guru. In fact, as we sit on the first floor of his double-decker bus, which bears the vinyl-wrapped logo of his 80 Stays photography tour, Trey is sure to mention that he’s just a normal guy, on the same creative journey as the crowd of 200 photographers waiting to see him outside.

To also be fair, outside the bus, several people are having an interesting conversation about the weather.

“I don’t know how he does it, but he always brings the damn sunset,” says Philip who is tall and friendly and whose meteorological analysis make several people around us nod in agreement under a ceiling of gray clouds.

“Wherever I go? The moment he comes off of the bus … beautiful sun. This happened in Amsterdam last night. It’s ridiculous. The ugliest day and suddenly he comes off the bus and it turns sunny.”

Philip is a biomedical scientist who has joined Trey Ratcliff on his Ritz-Carlton sponsored European photo walk tour, flying from Ireland each time to join him in Barcelona, London, Vienna and now Berlin. It’s not a trip he would have made a few years ago.

“I was a very fact-y, science-y dude who wasn’t creative in any way.” 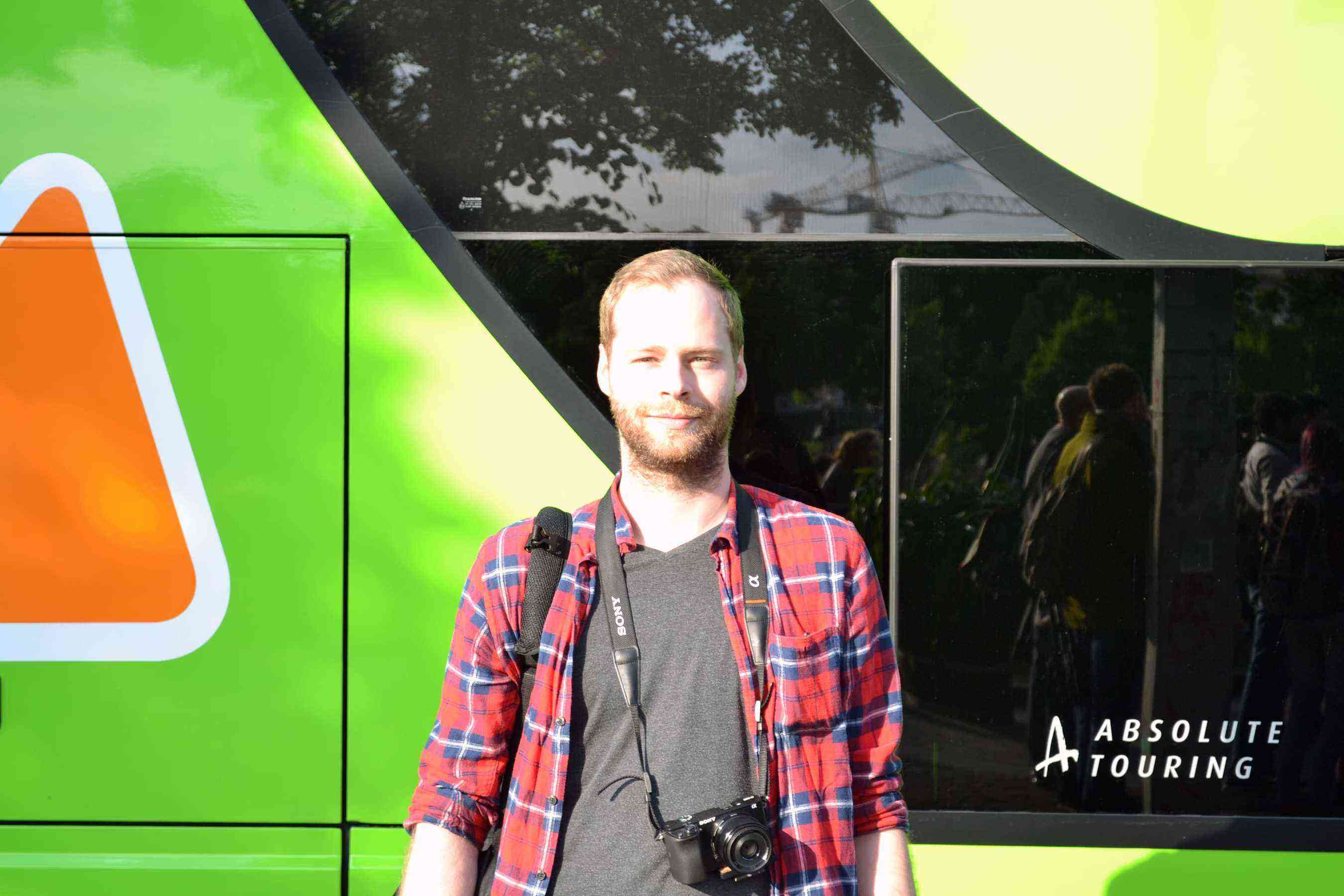 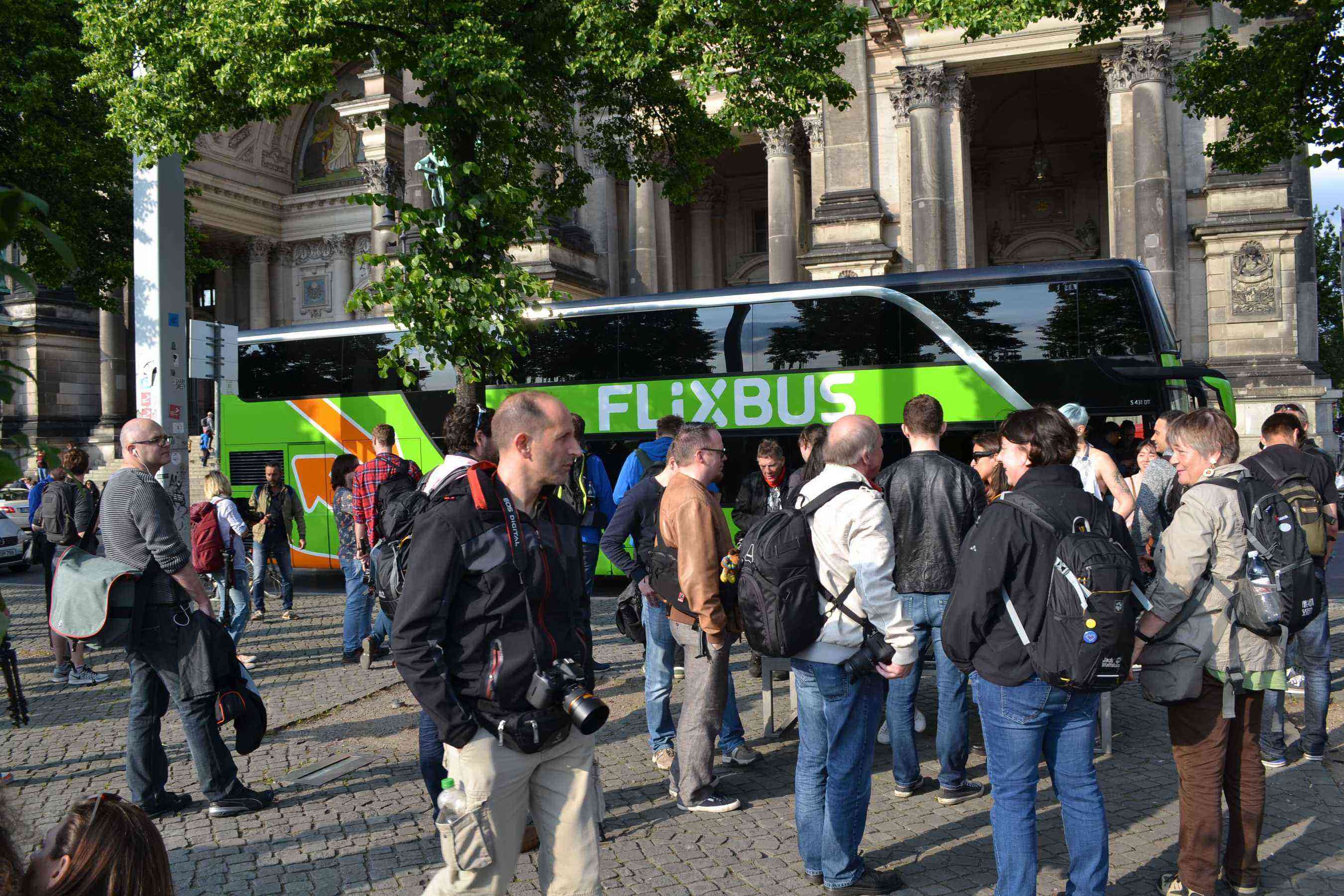 But things changed when he was introduced to Trey Ratcliff’s photography. Now, three years later, he has his own YouTube channel, portfolio. And when he heard about Trey’s photo walk tours, “I thought, this one time, I’m going to meet the man who put you with what you may go into for life.”

Ratcliff’s work has a reputation of inspiring ardor in his fans. He has a body of work that’s been viewed over 150 billion times (there are around 6 billion people on planet earth, for reference) in the 10 years he’s been taking photos, a number that grows by around 150 million views a day (three times the number of people who saw the top-grossing movie of 2016).

They’re staggering numbers, and ones he’s reached by design via the methods that he teaches for free on photo walk like this one.

Step One: Turn Up The Volume

Trey Ratcliff’s photographs capture some of the most beautiful places on earth: winding valleys with streams running through them, far eastern cities that glow fluorescently at night. Then he takes those images and turns up the volume.

The process involves post-processing high dynamic range (HDR) software that Trey Ratcliff designed himself. It takes colors captured by a camera (often three photos taken at different settings) and combines them to create brighter colors and higher contrast that, when exaggerated, create startling and surreal portraits of now-magical places. Or, as director JJ Abrams puts it, “other-worldly, mind-blowing creations that, at first glance, appear to be some digital trompe l’oeil.”

JJ Abrams describes Ratcliff’s photos as “other-worldly, mind-blowing creations that at first glance appear to be some digital trompe l’oeil.”

Ratcliff did not invent HDR, but he is often called its guru, and he’s certainly a pioneer in the field, sometimes combining as many as 130 photos for large-scale commissioned pieces that can sell for as much or more than $75,000 a piece. 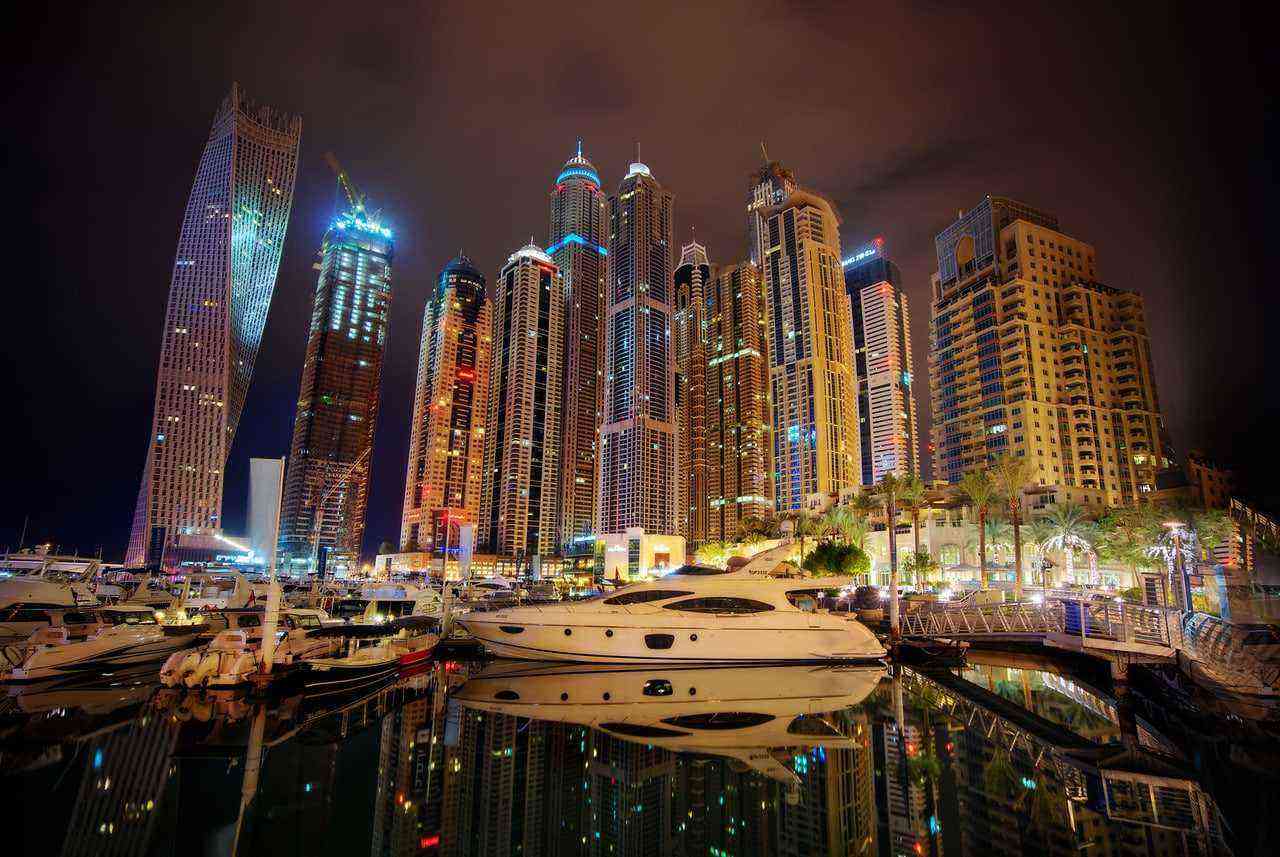 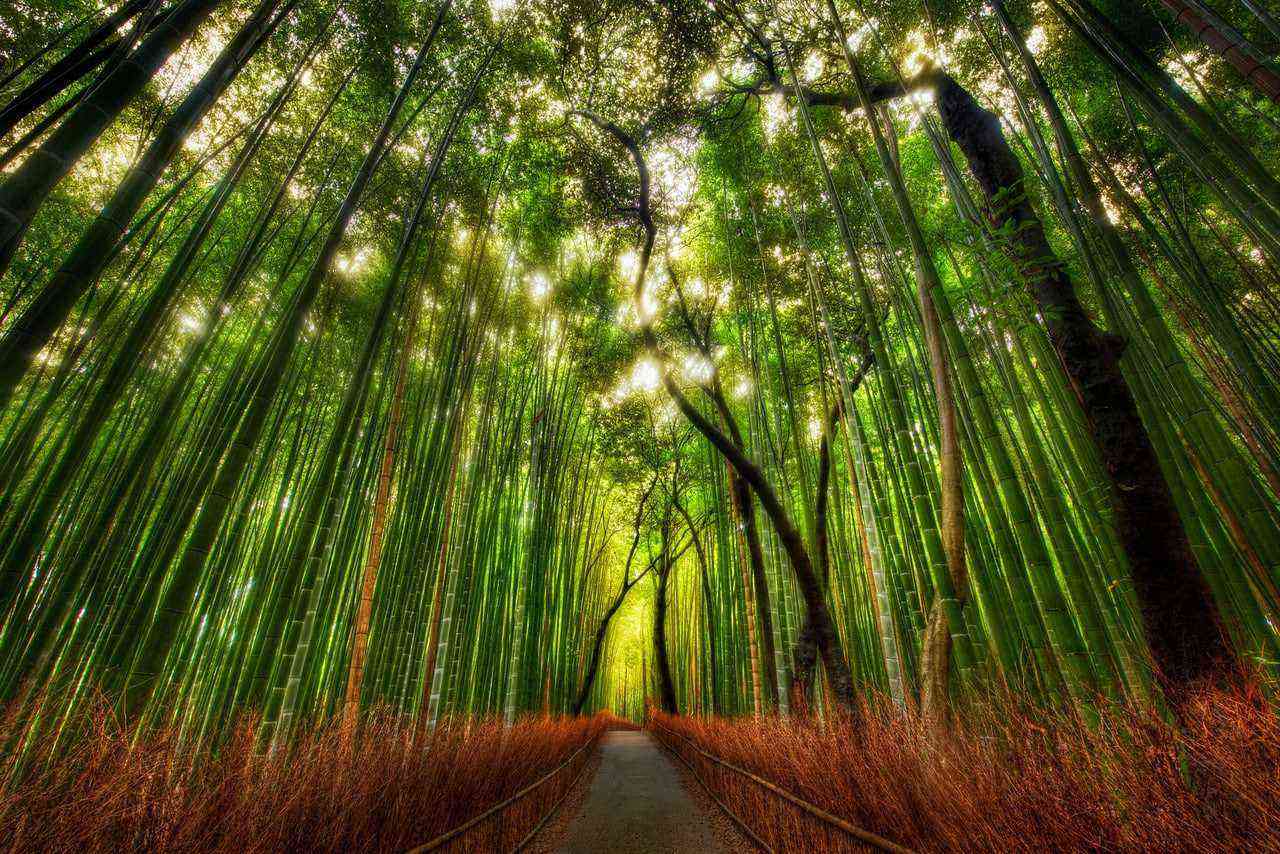 And while harnessing the high dynamic range, Ratcliff may have stumbled on a frequency that resonates with his fans. Grammy-winning composer Hans Zimmer calls him a “daily source of inspiration.”

And when the Ritz-Carlton stumbled across his body of work, they were similarly inspired. Since then, they’ve sponsored two of Trey Ratcliff’s world tours, and given him more flexibility to teach for free by providing him lodging wherever he travels.

The hotel brand located in some of the most beautiful cities in the world has been helping its guests photograph them more artfully with Trey’s photo walks: guided photography tours around the most photogenic locales with tips from the master travel photographer himself. Ratcliff, in turn, travels the world teaching the secret to more likeable travel photos–for free. 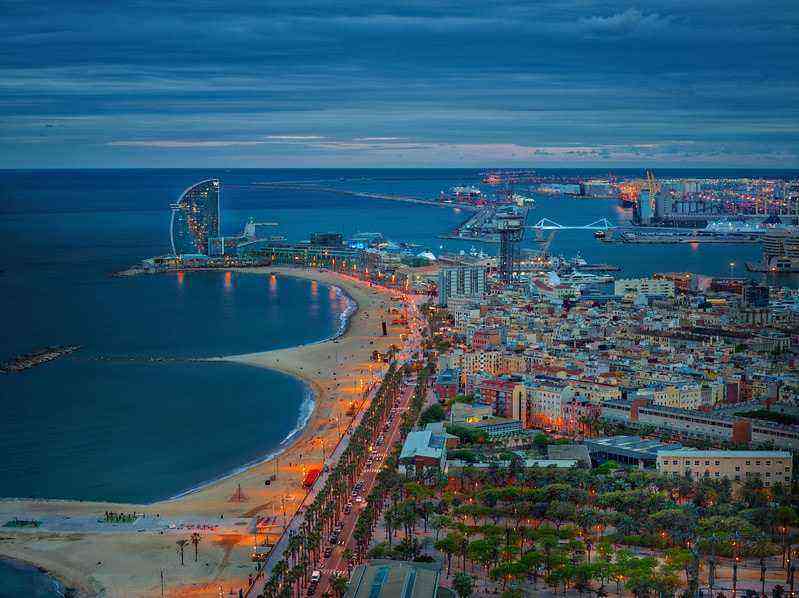 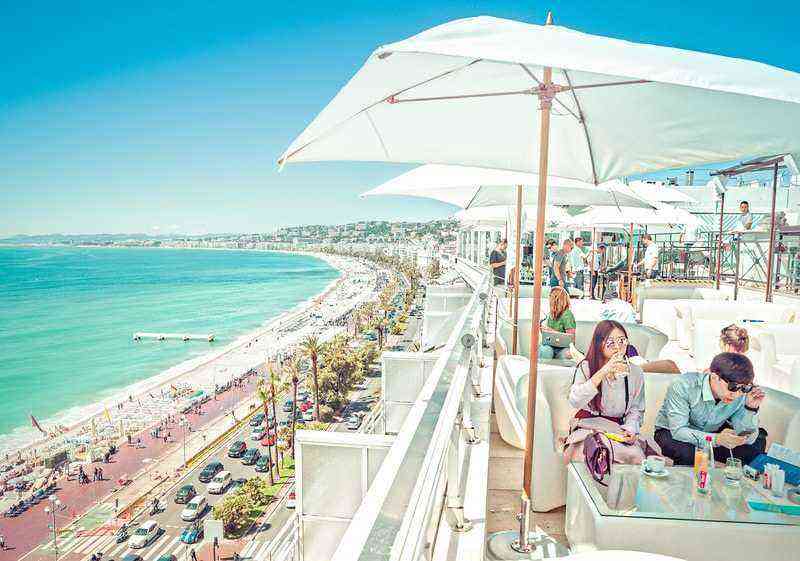 1. Down The Coast Of Barcelona 2. Breakfast Mimosas In Nice Trey Ratcliff

“He sees things we don’t,” says Hannes, a photo enthusiast from nearby Straussburg who not only joined the free photo walk but also for the ticketed after party. The entrance fee comes with a year-long subscription to Aurora HDR. It also comes with a chance to have some Q&A time with Trey Ratcliff. When I ask what Hannes likes about Ratcliff, he answers, “He’s a bit of a philosopher,” which is an understatement. 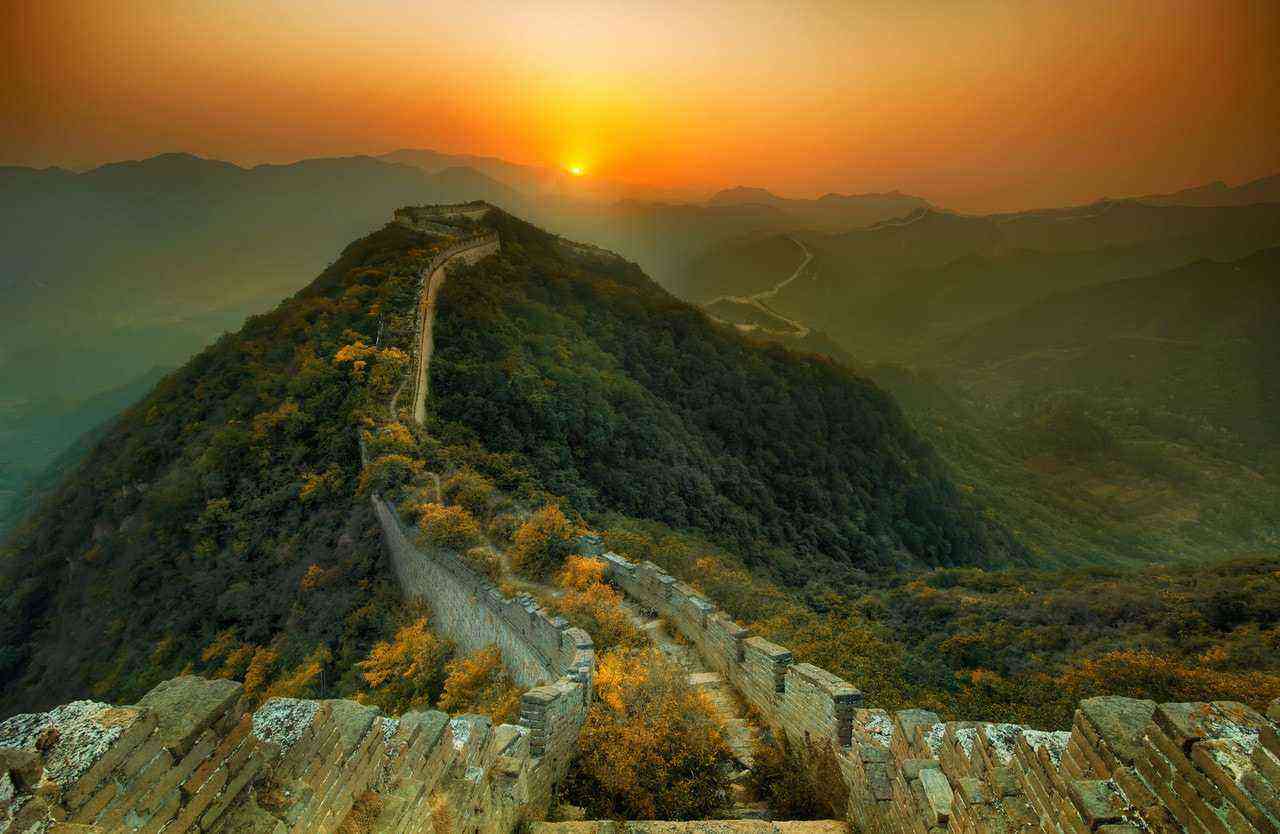 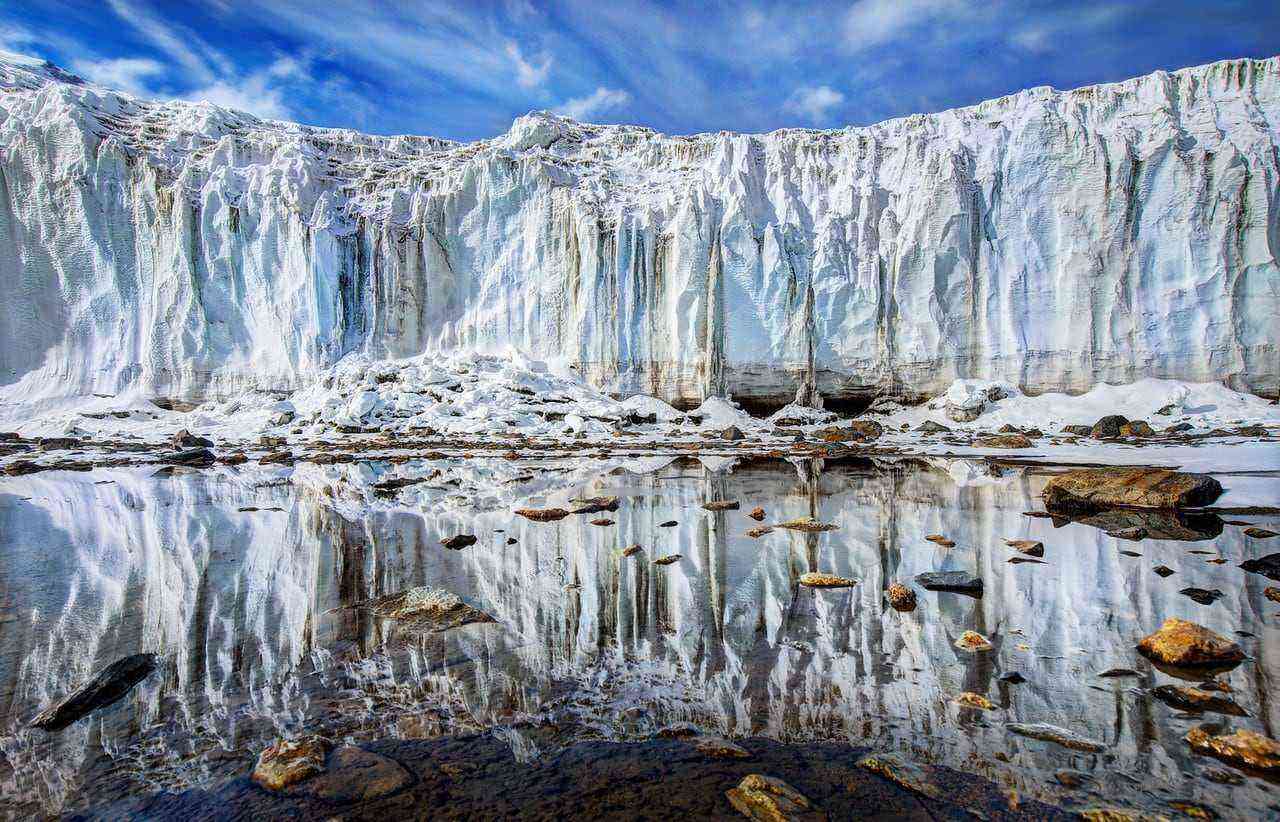 “Those of you that have followed me even for a little while or a long time know that I like to be kind of philosophical and thoughtful about creativity, and what does it all mean? What are we all doing here?” says Ratcliff from the small, portable podium erected in front of the coalescing crowd.

“When you take photos, you are being present. There’s no past, there’s no anxiety about the future. You’re just being there, in the moment, and the more all of us do this, the more conscious we all are.”

The crowd listens silently to more advice, a book recommendation, and at the end a call for questions. Ratcliff prompts: “I like technical questions, personal questions, inappropriate questions. Ask me anything, I’m a super nice guy.”

No one has any. Whether everyone else is confused, or silently ready to begin, it’s hard to tell. After a moment or two of awkward silence, we begin our photo walk under a sky that has rid itself of its clouds to glow clear and blue and primed for a perfect sunset. 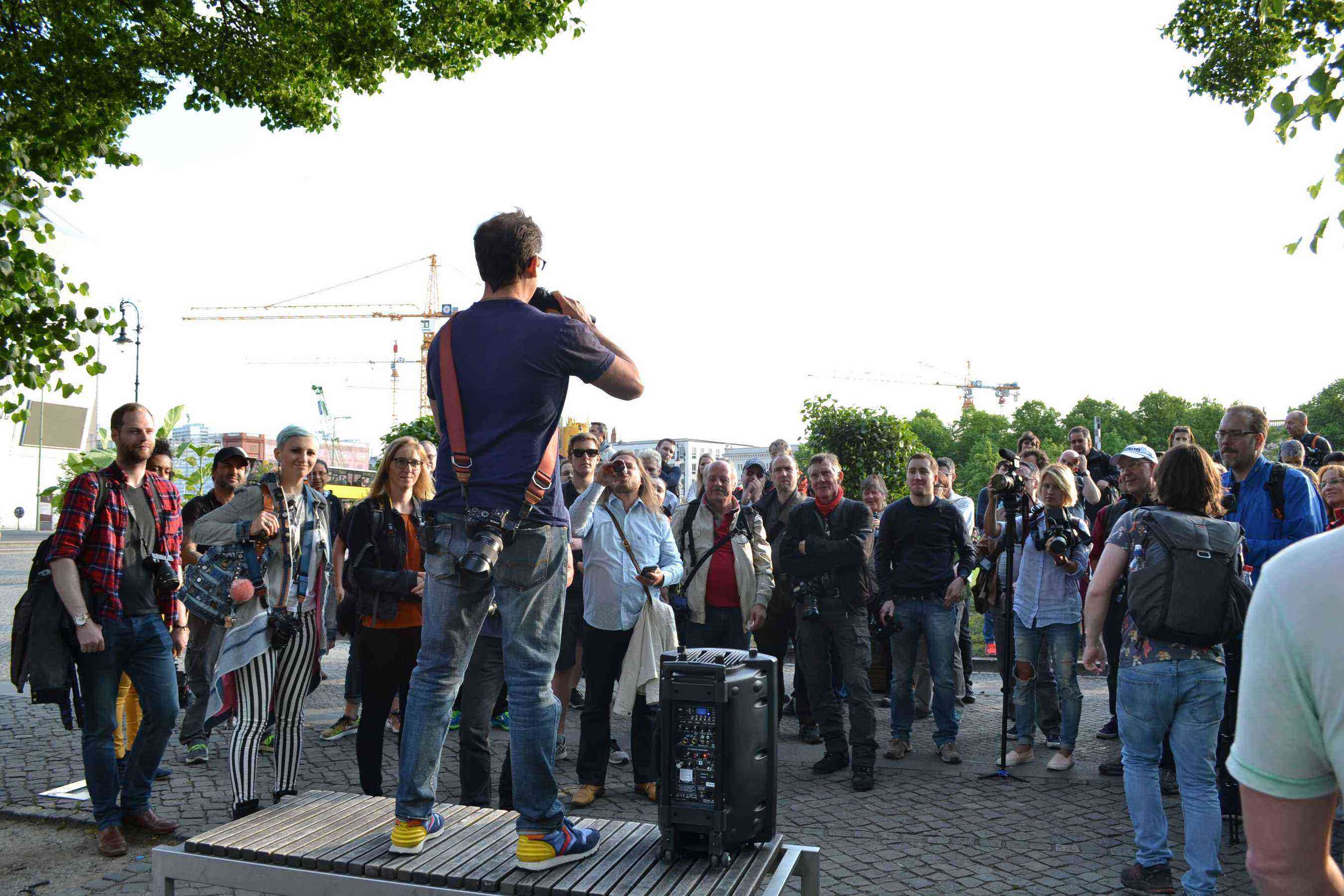 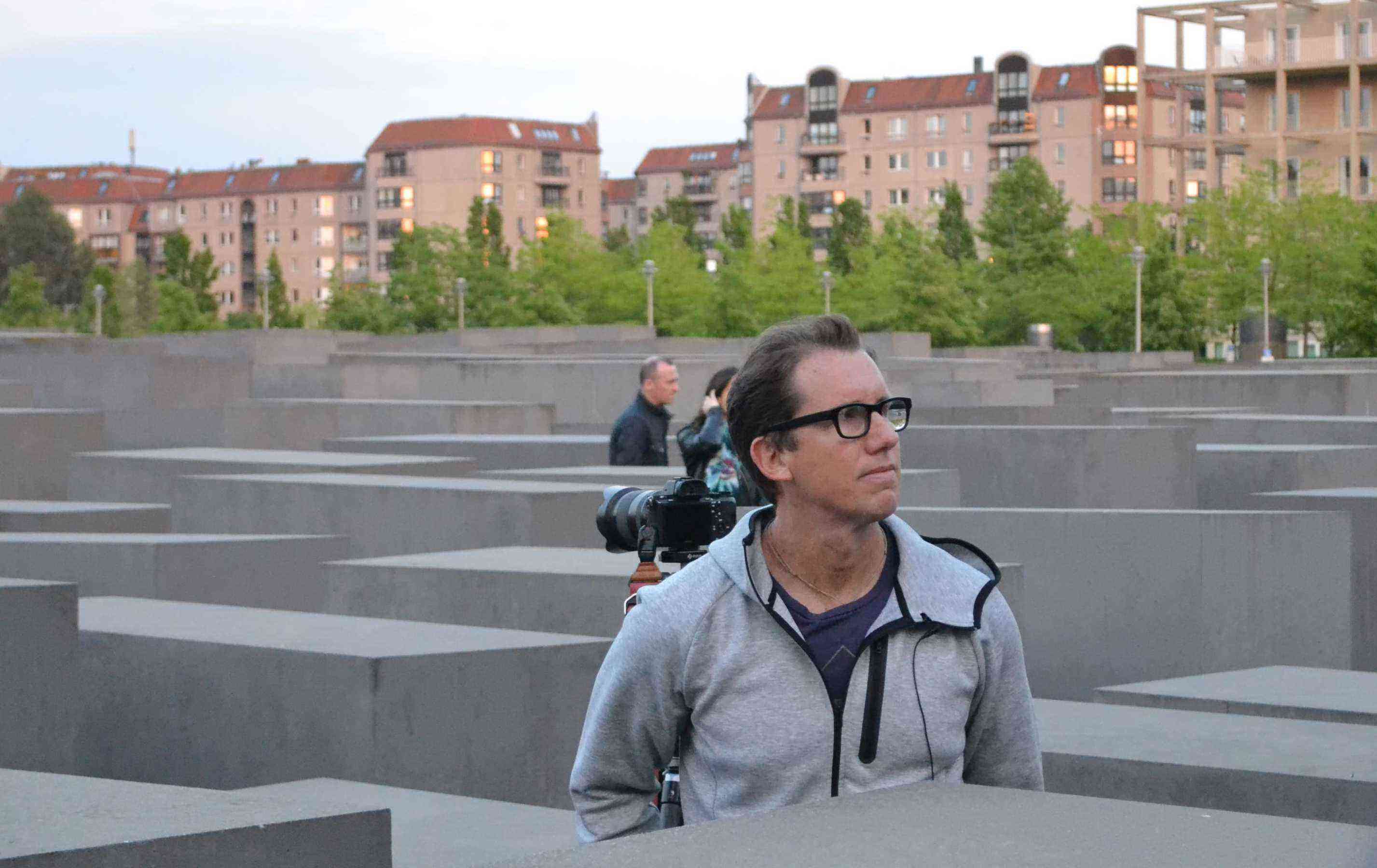 We start our journey on Museum Island’s Lutsgarten square, with the Spree River flowing behind us. Our photo walk is on a pre-planned route that passes by The Reichstag, The Berlin Cathedral, and more of the most photogenic places in the city. We don’t focus on taking pictures of any of them.

Our photo walk is on a pre-planned route that passes by The Reichstag, The Berlin Cathedral, and more of the most photogenic places in the city. We don’t focus on taking pictures of any of them.

Our first stop, the Altes museum, has colossal columns and a sprawling portico. We are directed to turn our attention to the walkway in front of it. Because, says Ratcliff, it’s the key to making our photo likeable–by tapping into our collective Pleistocene era instincts honed on the Savannah.

Paths, he explained, strike a chord in us all: they’re a sign of fellow travelers, roads or rivers or trails that might lead to adventure, friends, food or home at the end of them. That’s why, anthropologists argue, our brains wired over time to give us a little dopamine every time we see them. They make a vista almost imperceptibly more enjoyable, and they’re just the kind of thing that makes a photo more likeable.

“While human beings have lived in cities for the past few thousand years, our brains are still hard-wired to life on the Savannah, which we experienced for hundreds of thousands,” he explains. “Include [a pathway] in your shot and people will just intuitively enjoy it, even if they don’t know why.” 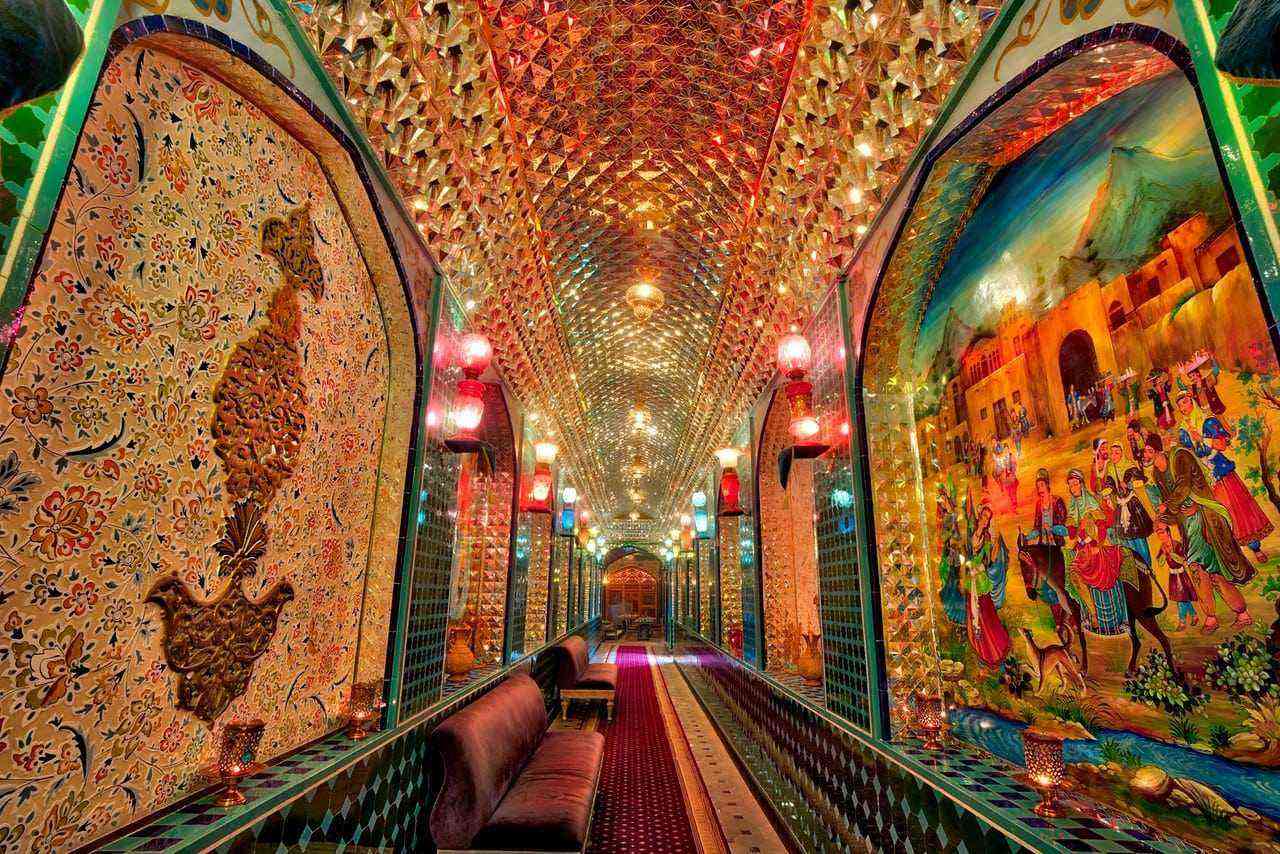 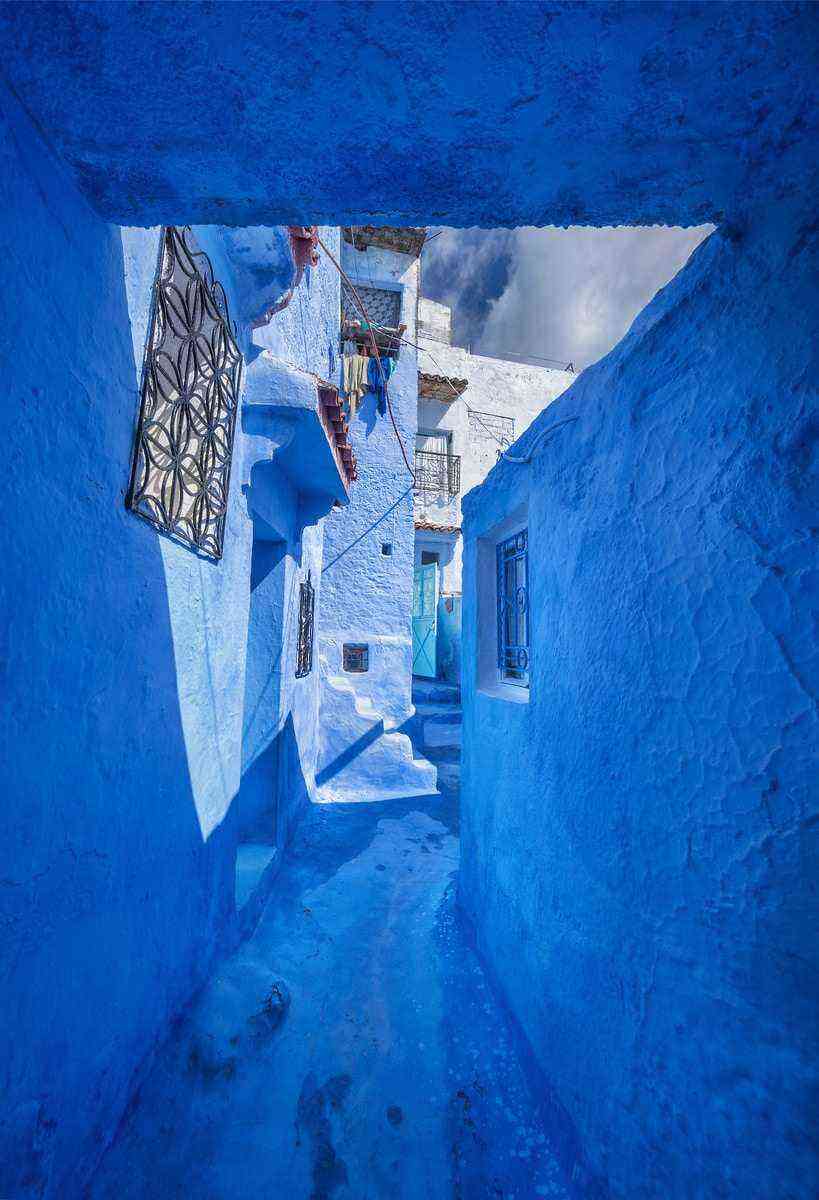 It’s all theory that Ratcliff has distilled from his analysis of his 150 million daily page views, analyzing the data on what people click on, return to, and favorite. Then, he filters this information through other disciplines to get down to the root of why people click.

“I don’t read any books on photography,” says Ratcliff. “Anthropology, science, religion, history, stuff outside of my realm–that influences my photography in a way.”

“I loved creating more than being part of the machine.”

It’s deeper than I thought a photography walk could get. Ratcliff leads us around the city teaching us a new aspect of photography at every spot, impressionist color theory by The Reichstag, the rule of thirds at the Memorial for Murdered Jews, and shots of the sky for a quick lesson on which DSLR settings work best for capturing sun rays. It’s all part-TED Talk, part-Wikipedia hole, part-philosophical treatise and path toward inner peace–something it took Trey Ratcliff a while to find.

In fact, the HDR guru didn’t pick up a camera until the relatively-late age of 35 when he went on a business trip to Kuala Lumpur and took his camera with him. And at some point, while photographing the beauty of the country, he realized, “I loved creating more than being part of the machine.”

Photography helped him find his passion and overcome his introversion. Ratcliff then quit his day job which is how he spends so much time sharing his art with other “awesome, introverted, searching photographers who are learning to become creative.”

During our next stop, Berlin’s Museum Island Bridge, with the Spree River flowing beneath us, I ask Ratcliff why he does these photo walks. He took the opportunity to say thanks to the crowd.

“It’s really just to give back to you guys because you have really changed my life. You’ve given me so much, I can’t thank you enough. From the beginning, I’ve been creating tutorials and sharing all of my full-res photos, all of my tips and tricks, and for some reason, it works out. It’s a Karma thing going on.”

“You give away yourself. You have an open heart and you’re vulnerable and everything just works out for you. And the more I do this, the better everything seems to get. It’s not a zero-sum game.”

Later, when the crowd has thinned out he adds, half-jokingly, “I want people to be happy. Maybe because my parents got divorced and I feel like it’s my fault.”

By the end of the photo tour, he’s given away a lot of himself. We have walked and talked and photographed for four hours. He’s set up shots so that we can look through the viewfinder, shared stories from his travels, and answered questions from beginners and expert.

Says Hannes as we’re wrapping up, “The biggest thing that touched me is when [Ratcliff] said, ‘I want to give back all the things that you gave me.’ This totally fits into my own philosophy of life. You get something. You get a lot from other people when they are open enough.” 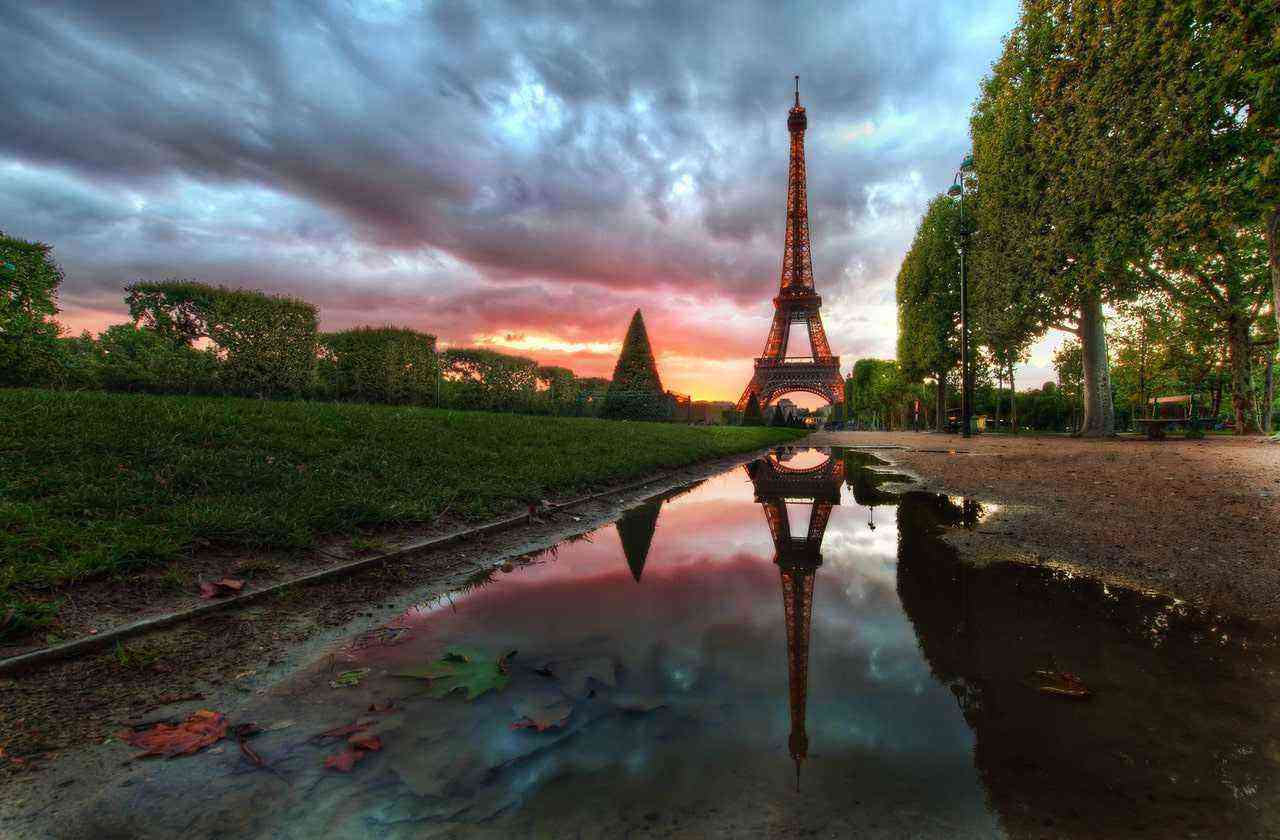 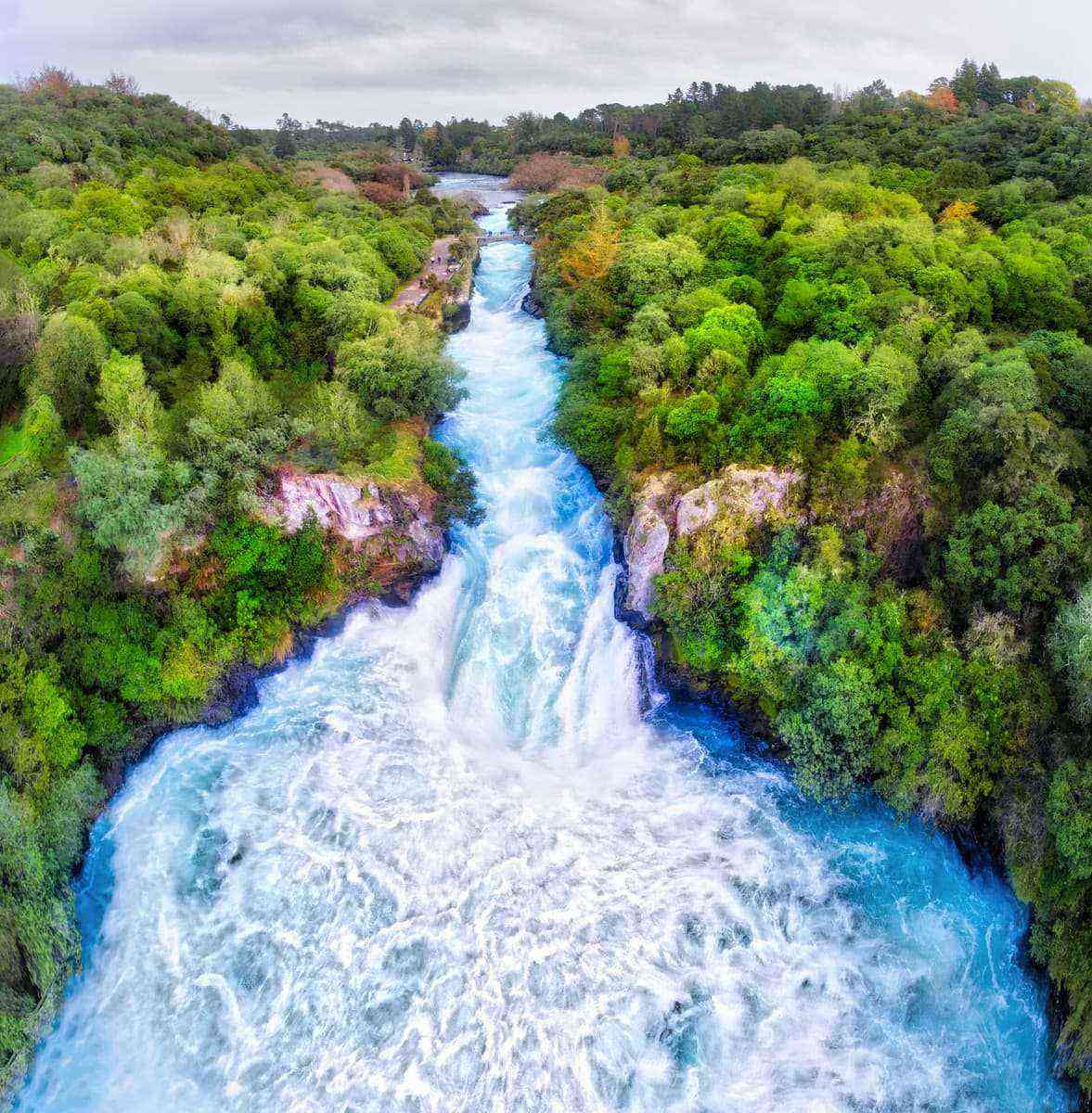 We end back at the Ritz-Carlton for appetizers, drinks, and a slideshow of some of Trey Ratcliff’s best work: breathtaking photos of some of the most beautiful places on earth, often taken while staying with the Ritz-Carlton in Thailand, Vietnam and more far-flung places. Only those who bought tickets to the photo walk can attend and get their free subscription to Aurora HDR, and get to hear about three more photography software programs Ratcliff is working on, including one that lights both sides of a photo, and one that makes still images ripple with life.

Not everyone attends. The philosophy of better photography through Pleistocene instincts and color theory aren’t everyone’s thing. And that’s fine with Ratcliff. “In some ways, I believe that you shouldn’t listen to what other people tell you because other people have their own baggage.” 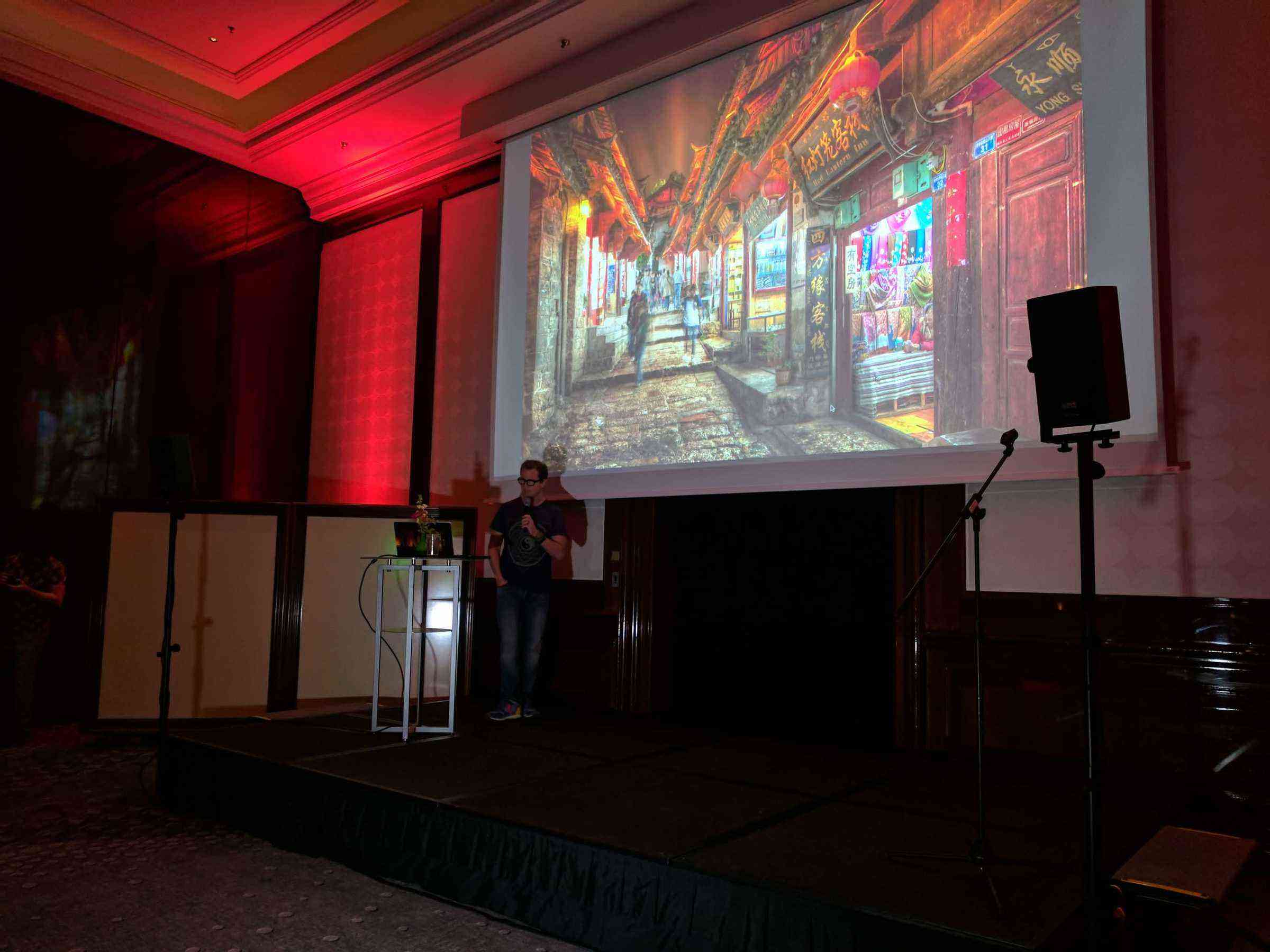 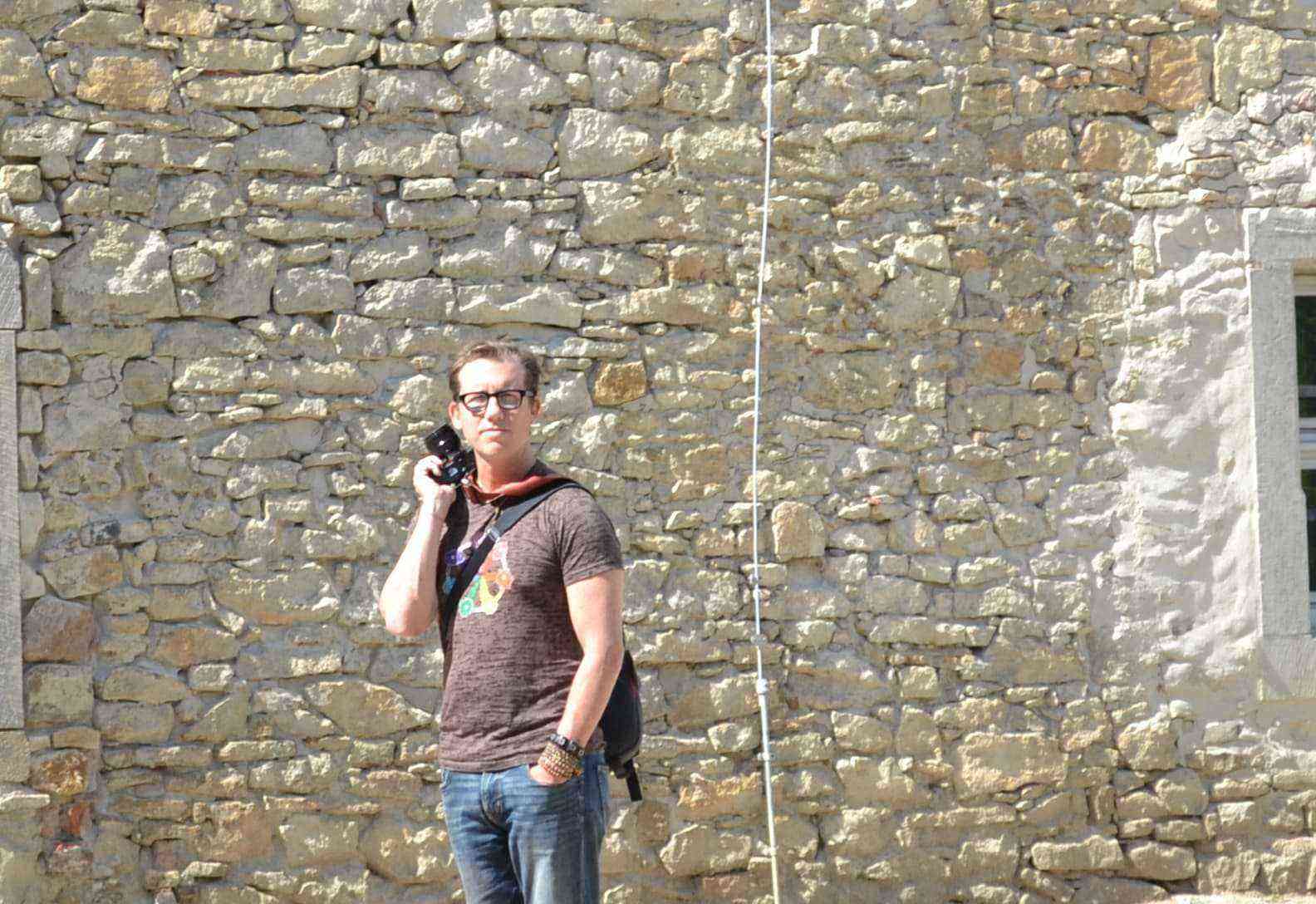 The easiest way to take better photos? “Take 100 photos, and pick your favorite five. Five photos that are just better than the others. Learn to trust your own voice.”

If you would like to know more about Trey Ratcliff, the anthropological roots of photography, or mindfulness behind the lens, sign up for his next tour with the Ritz Carlton hotel in Asia in 2018 at Trey’s blog Stuck In Customs, or follow him on Instagram @treyratcliff.