Arts & Culture Eva Morreale The Absolute Best Neighborhood to Stay in the Next Time You’re in London Is...
Todd Shoemake | Shutterstock

What to know before planning a visit to The Lightning Field land art installation in Quemado, New Mexico.

Picture this: 400 stainless steel poles standing 20 feet tall, gleaming in a grid formation on the high desert plains of southwest New Mexico. These slender, metal pillars, about the height of a male giraffe, are spaced 220 feet apart to create a meticulously measured horizontal plane surrounded by mountains and the sounds of coyotes. Is it Elon Musk’s landing pad for interplanetary spacecraft? The setting for the next installment in the Star Wars franchise? NASA’s rumored magnetic force field?

Nope. Despite the scenic vista’s sci-fi atmosphere in a state that’s also home to Roswell, the site of an alleged UFO crash landing, this undisclosed location is the setting for a permanent land art installation, titled The Lightning Field by the late artist Walter De Maria. And you’re going to have to continue using your imagination to picture it because photography of this middle-of-nowhere masterpiece is restricted, including the reproduction of images for travel features like this article.

The western stretch of the United States is a popular canvas for artists associated with the land art movement of the 60’s and 70’s, often defined as works of art embedded in the natural landscape of the earth. Materials more common to the manufacturing world, like iron and concrete, transform wide open spaces into site-specific art framed by the sky above and the ground below. Land artists favor an aesthetic exemplified by a less-is-more approach. De Maria combined both practices of land art and minimalism in his quest for the ideal backdrop to position his heavy metal masterwork known as The Lighting Field. An isolated outpost in New Mexico won out for its flatness and high potential for lightning strikes. Another bonus point: the town’s name, Quemado, means burned in Spanish.

Unlike most land art installations viewed via guided tour or limited to a pit stop snapshot, The Lightning Field requires an overnight stay booked through the Dia Foundation which maintains the installation and on-site lodging available from May through October. Every February, over 1,000 emails are sent requesting a one-night-only stay in an unmarked location that’s roughly three hours from the Albuquerque airport. The 2018 season is already fully booked with a waitlist for a slot in the six-person cabin, equipped with a kitchen stocked with a vegetarian casserole and breakfast fixings, three bedrooms, and two bathrooms. Your stay includes transportation to The Lightning Field with a strict 2 pm departure time from Quemado and a return to your vehicle around noon the following day. Rates run $150 per person with an increase to $250 per person for the months of July and August when the potential for lightning is at its peak. However, no guarantees are made that Mother Nature will add an electric brushstroke to De Maria’s manmade creation.

On Location at The Lightning Field

This isn’t the place for filling up your Instagram feed. Instead, The Lightning Field is an experience.

Nevertheless, a visit to The Lightning Field comes with a liability waiver upon arrival at the Dia Foundation office in Quemado. From here, you and your cabinmates will be chauffeured in a rugged SUV to The Lightning Field on a route free of any notable landmarks. The rows of silver poles shining in the afternoon sun eventually appear in the distance and the small talk chatter among your fellow passengers gives way to exclamations of “wow.” Like a mirage, the poles take on the shape of missiles, silver-plated matchsticks, and whatever else your mind conjures up while taking in the view. But this isn’t the place for filling up your Instagram feed. Instead, The Lightning Field is an experience. Put on a pair of sturdy footwear for a free-range trek on terrain marked by impressive anthills, a variety of animal droppings, and brushy blonde grasslands. The tailor-made stainless steel poles catch the sun’s rays as well as your own reflection for a satisfying selfie fix. While official photographs of The Lightning Field during a lightning storm are striking, the absence of stormy weather means you’re able to roam the installation without fear of death or imprisonment in the cabin during your stay. Savor the undisturbed intimacy with the artwork juxtaposed against the natural beauty of the great outdoors as sunset and sunrise transform The Lightning Field into a field of light.

Although most of your time at The Lightning Field should be spent outdoors, the cozy 100-year-old cabin offers a large room for communal dining and lounging over De Maria’s detailed dossier about the site and its creation. Otherwise, it’s a distraction-free zone with no big screen electronics and limited cell phone reception. (There is an emergency line available.) The worn wooden chairs on the back porch provide the perfect vantage point for taking in The Lightning Field, as well as sightings of the cottontail rabbits who reside under the cabin. Resist the urge to accompany the artwork with a playlist and let the sounds of coyote yelps and the occasional hum of a plane overhead be the music to your ears. Around 11 am the next day, your chauffeured ride will arrive to take you back to town.

INSIDER TIPReservations for the 2019 season begin on February 1, 2019 at midnight (Mountain Standard Time).

The average afternoon temperature hovers around 80 degrees but the mornings and evenings can be chilly. Dress in layers paired with sturdy footwear, sunglasses, bug spray, and sunscreen. Always check the weather beforehand and take note of sunset and sunrise times. Binoculars are recommended for viewing wildlife in the distance, plus a headlamp or small flashlight for after dark and pre-dawn viewings. Be sure to bring your own snacks or other culinary cravings, along with wine and preferred beverages because there’s no grocery shopping once you’ve made it to Quemado. Forget the tripod or drones given the restriction on photography and pack a journal and pen to make notes of your stay. Leave behind a cash tip for the staff who replenish and refresh the cabin.

Pull over before Quemado in the deliciously-named community of Pie Town for Pie-O-Neer bake shop’s signature chocolate chess pie flavored with red chile to share with your cabinmates.

Sights Along the Way 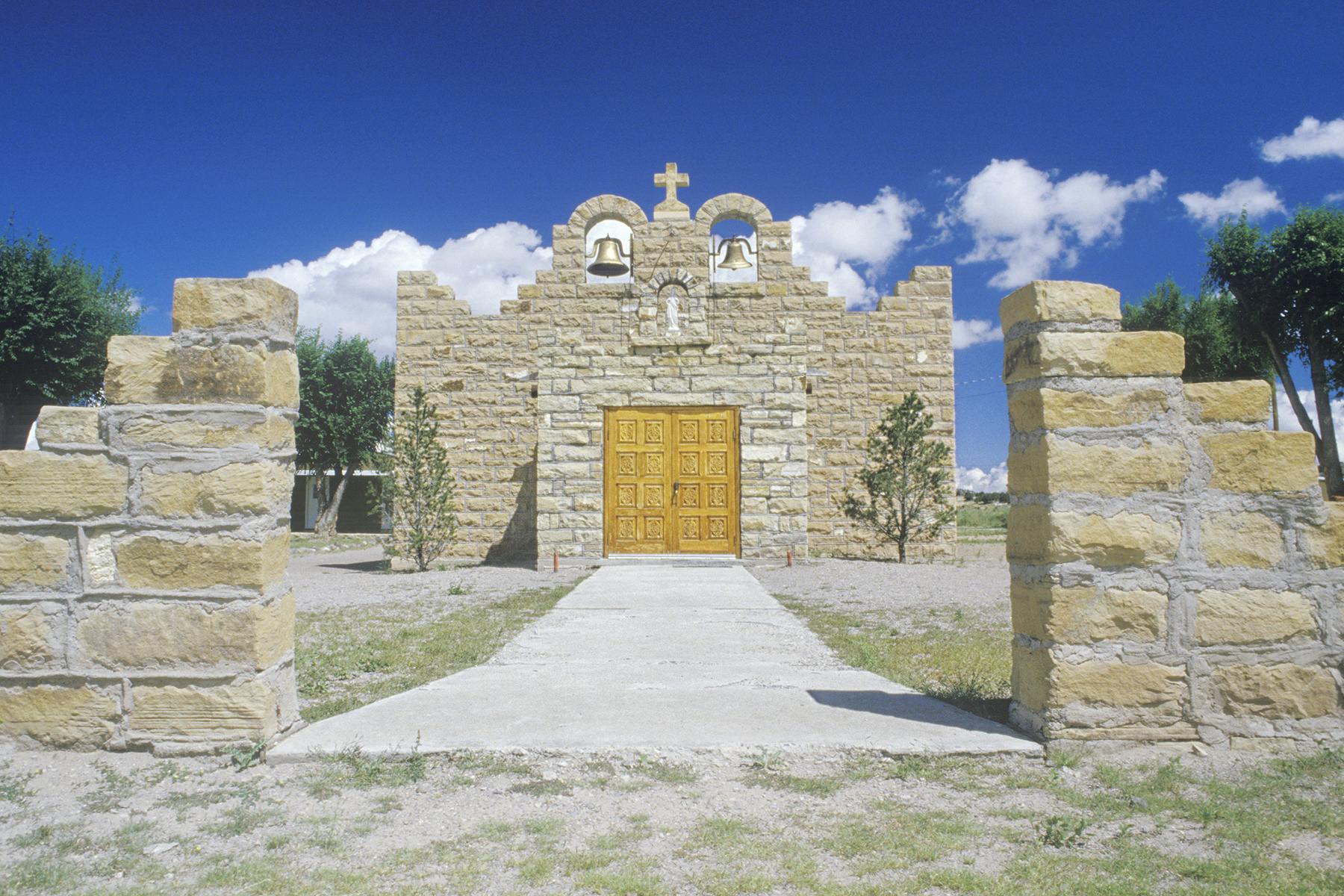 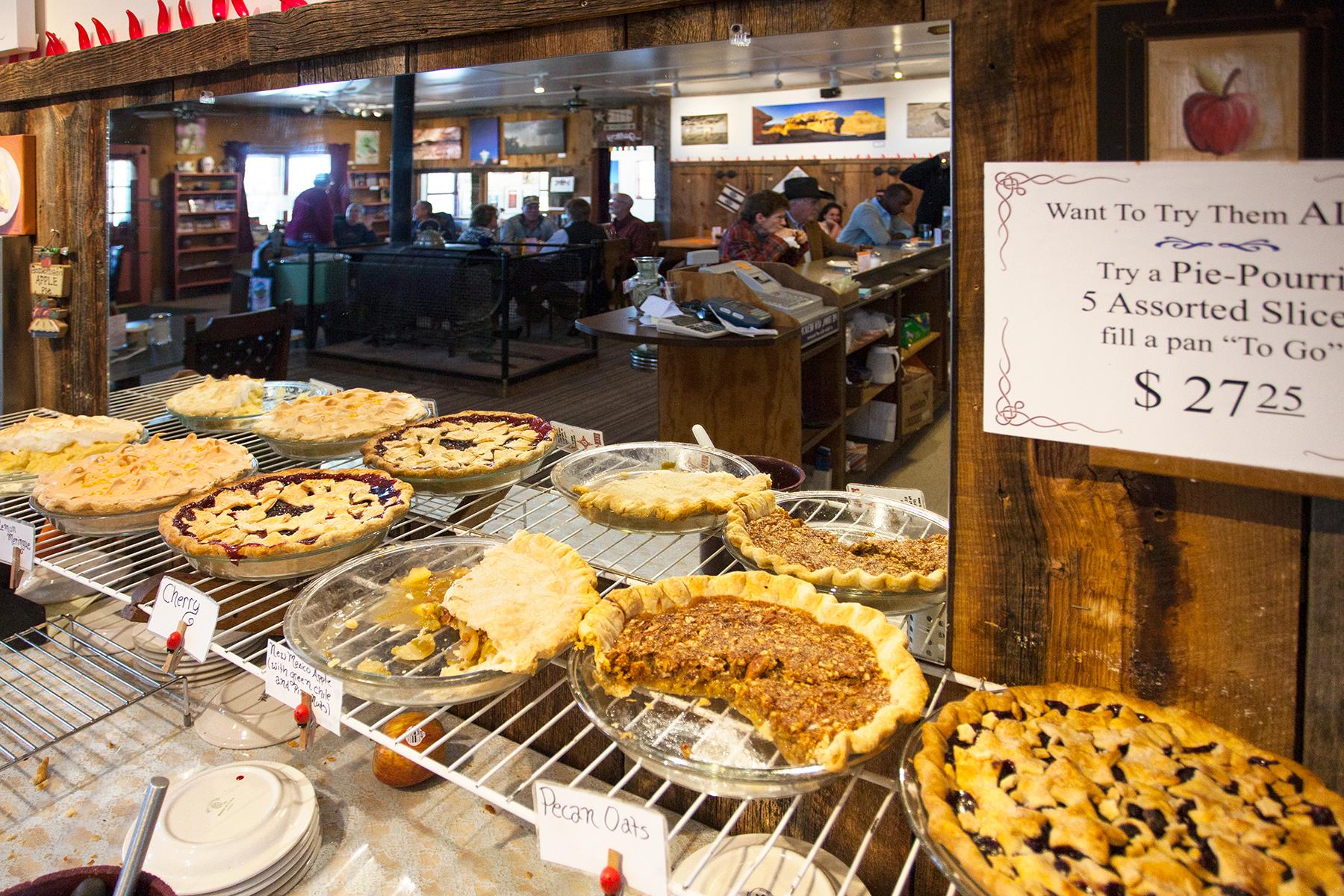 Make the most of your road trip to The Lightning Field by including a visit to another noteworthy field before or after your stay. Approximately two hours from Quemado, the National Radio Astronomy Observatory mans the Very Large Array (VLA), a field filled with 27 dish antennas, fully visible from the open road. Unlike De Maria’s work of art, photographs of the 230-ton, 82-foot tall telescopes are permitted. Just put your phone in airplane mode to prevent interference with their communication. Entrance to the facility is free where you can take a self-guided walking tour.

For a longer stay, the cities of Albuquerque, Santa Fe, and the mountain resort town of Ruidoso all make ideal launching points for a visit to The Lightning Field.

The wide open spaces of Texas offer a variety of land art. Minimalist art master, Donald Judd’s 15 untitled works in concrete can be viewed on the grounds of the Chinati Foundation in the West Texas art haven of Marfa. The Cadillac Ranch, created by the art collective known as Ant Farm, planted Cadillacs in an open field outside of Amarillo in 1974 where road trippers still pull over to tag their names on the Cadillac remains and pose for photos. Houston’s Rice University campus is home to James Turrell’s Twilight Epiphany Skyspace, featuring a LED-light sequence at sunset.