Pigeons don’t exactly have the best reputation and are, arguably, the most despised of the birds, referred to by many as “flying rats” or, say, “trash birds.” And call them what you want (or don’t because it’s extremely rude) they’re still…alive. Pigeons are a living, breathing creature, and like all living, breathing creatures, they deserve respect. This is just a fact.

Respect is not often given to them, however, as these so-called “nuisance birds” are regularly treated as villains of their own environment (that environment being “everywhere” or “most places”). For example, back in June of this year, it was announced that the Wynn Las Vegas would be implementing a new type of security—trained birds of prey (raptors). Their function? To keep pigeons (nuisance birds) away from their outdoor dining and pool areas.

Now, although they present it as an “environmentally friendly and humane approach,” which, sure, it might be (I guess?), this isn’t the only “job” designed specifically to scare pigeons on behalf of tourists. The most recent crime against the ubiquitous bird hails from Chiang Mai, Thailand, specifically near Tha Pae Gate, where there are actually people with the job title of “pigeon spooker,” whose only task is to frighten pigeons into freaking out and flying everywhere so that tourists (or more likely Instagram Influencers), may get a “good photo” with them flying all around you.

This is being done because, although Tha Pae Gate is known for its large amount of pigeon residents, they are mostly docile and just kind of walk around, not causing a stir. This, apparently, is a problem to some tourists, because in order for them to create the illusion of traveling in a constantly photogenic state, they need the birds to be terrified and flying everywhere around them so they can look like they have…a magical power over the birds? I guess? 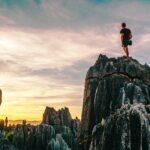 But, hey, guess what, you jerk: You don’t. Think about this: You wouldn’t go running into a forest going, “BAHHHHH,” in efforts to scare the squirrels into running up some trees so you could film yourself with them, would you? No. You wouldn’t. It’s unkind to the wildlife in that situation, and the same goes for scaring pigeons. Sorry, pigeons are creatures. And people being paid to frighten them so they’ll freak out is unethical. You’re disrupting the environment and this is not good tourist behavior. Plus, you’re not even doing it for a “good reason” (not like there is one, but, just saying): You’re just doing it for your own selfish Instagram trophy.

Also, perhaps this is a personal side note, but why do you want a photo of a bunch of pigeons flying all around you? Despite being an advocate for these so-called “trash birds” (rude), I’m no fool: Like many types of animals, it is possible that they are carrying some sort of illness. And if not, they are very dirty, generally. They’re pigeons—they deserve respect as a living creature, but let’s be real, they’re also unbelievably unsanitary, and you want them swarming around you all scared? Why? For a… photo? Let me go ahead and just say it: That photo isn’t worth it! Sorry! (Actually, no, I’m not!)

Also, even though scaring the pigeons is bad and disruptive to the environment, that’s actually not the only disruptive part. For example, say you, perhaps, live and work near this area of Chiang Mai. Perhaps you are walking to work, through the flocks of walking pigeons, and then some idiot runs up and freaks all of them out by you, as someone takes a photo of someone else. I cannot stress this enough: That is extremely annoying. Knock it off.

Luckily, the city of Chiang Mai is working to stop all of this, seeing as extremely scared birds could probably pose some health risks. Anyone caught employing themselves as a “pigeon spooker” will be arrested if they are caught in the act of frightening the birds. As a general rule, the Public Health Office of Chiang Mai advises people to not even feed the pigeons at Tha Pae Gate, or risk being fined $650 USD.

Look—you can hate pigeons. But consider hating them without scaring the living crap out of them just for an Instagram photo. Be a good tourist! Not only is it disruptive and disrespectful to both people living in the area and the birds themselves, but it’s also just straight up super lame.