The Python Temple and the Sacred Forest.

The Benin Republic is a small West African nation widely regarded as the home of Vodoun, or voodoo, despite centuries of colonization, invasion, and the introduction of other religions such as Christianity and Islam.

Numerous shrines line the sand-filled streets, items for Vodoun are displayed in the markets, and colorful festivals with masquerades are celebrated in the streets. The people here have held on to their beliefs while coexisting peacefully with adherents of Abrahamic religions, and even incorporating multiple beliefs in their spirituality.

Perhaps one of the most sacred places in the country is Ouidah. This city is home to many sacred sites such as the Python Temple and the annual Vodoun festival.

“Le Temples Pythons,” my friend and I tell the taxi driver in our broken French. He’s driven us from the economic center of Cotonou. “D’accord,” (“OK”) he says. There’s no need for further explaining, the Python Temple is an essential site for many of the country’s visitors.

As we come to a stop, he helps us find a bike, a popular mode of transport all over the country. We don’t need to stumble too much with the language, the bike driver speaks English and knows exactly where we’re going.

Much like the religions, the languages here co-exist in harmony and the locals interact with patience and indulgence.

The people of the Benin Republic speak French, as it’s a former colony of France. The indigenous languages include Fon, Bariba, and even Yoruba. Much like the religions, the languages here co-exist in harmony and the locals interact with patience and indulgence; often responding to broken French with broken English as visitors attempt to explain their mission.

We reach the temple and it is quiet. We’ve come during the offseason; August is when most people visit for the summer. “Anglais ou Francais?” one of the men at the gate asks. We ask for a guide who speaks English. “Anglais si’l vous plait.”

Our guide introduces himself as Olubumi. He speaks no Yoruba but tells us his ancestors migrated from the Yoruba Kingdom of Oyo in neighboring Nigeria. It is not uncommon here for many Beniions to have roots from the Yoruba kingdom.

He tells us of how the temple came to be. Long ago, the king of Ouidah, Kpasse, sought refuge in the forest during the war. As he hid in the forest, the pythons emerged from the forest to protect him from harm. He then declared that Pythons were to be held sacred and protected. The temple today remains a sanctuary for royal pythons, who are purified and kept in a sacred room during the day.

In the evenings, they are let out of the rooms they are kept in and allowed to wander the village, sometimes wandering into people’s homes. It is, of course, a taboo to harm them, and they are often returned by villagers.

He once again emphasizes the power of positive thoughts saying, “When you hold the pythons, it’s good. If you think positive and good thoughts, good things will come to you.”

He emphasizes one thing throughout our visit; purifications and positive thoughts. “In the temple, you think positive and good thoughts.”

With over 10,246 people visiting the temple in a year, he tells us the majority of visitors come from France, Belgium, and Canada, along with a significant number of Nigerians, and a few Ghanaians. In the peak season of August, tourists of many races can be seen in front of the temple

Images of tourists with the pythons around their necks are quite popular. The docile royal pythons cause no harm; and according to him, there have been no incidents of biting or strangulation since the temple opened in 1992.

I worry that the influx of tourism might disturb the sanctity of the temple, but he assures me saying, “Visitors are very respectful, they pay reverence to the pythons and some venerate them.” He once again emphasizes the power of positive thoughts saying, “When you hold the pythons, it’s good. If you think positive and good thoughts, good things will come to you.”

He also says that the snakes are well looked after by two doctors–a physical and a spiritual veterinarian. They come in about every two weeks to make sure the snakes are in good condition.

As we get ready to exit the temple, we look up to see a statue of Mary looking down at us. The building across the temple is none other than the Basilica of the Immaculate Conception, one of the country’s most notable Catholic monuments. The location of the basilica only gives more testament to the peaceful cohabitation of religions. Olubumi says, “Here in Benin, people exist in peace, religion is not a problem.” He pulls out his phone and shows us an image of the archbishop, chief imam, and the Vodoun leader sitting side by side at a function. “We all live as one,” he says.

Outside the temple, we find another bike to take us to the sacred forest. He only speaks French and a litte English.

At the Sacred Forest, our guide Remi tells us about the lore of the forest. “We had a king in the former times named Kpasse. The story says that he didn’t die, he disappeared and turned himself into a tree. To outsiders, it seems like a mere legend, but the Vodoun spirituality is one of reincarnation. The trees here have remained sacred, so the whole forest is considered sacred.”  Kpasse’s legacy flows from the temple which kept his life, to the first where he retired.

This part of the forest contains statues of various deities sacred in Benin Vodoun. “Vodoun religion is a traditional religion, and our way of remembering our ancestors. We respect the laws of nature and life,” he says.

As we walk through the forest, the wind blows as if the spirits of the ancestors are present, watching us learn their history.

As we walk through the forest, the wind blows as if the spirits of the ancestors are present, watching us learn their history. We pass the symbolic representations of many gods in the Vodoun religion, including Esu Elegba and Oya.

As we walk through, we reach the gate to the main sacred forest, here only initiates can pass through. Remi also tells us that it is through this gate that the king passes.

Through the unpolluted forest, two monuments strike me the most.

“In Vodou, we believe in light and darkness, good and bad. The power itself is neither good nor bad, it all depends on what you do with it.”

Remi shows us to the giant iroko which king Kpasse turned into. “This is the main sacred tree in the forest. You can make a wish here. Just think positive thoughts and leave a small offering and it will come to pass.” The belief of good and positivity is visited once again. Remi explains saying, “In Vodou, we believe in light and darkness, good and bad. The power itself is neither good nor bad, it all depends on what you do with it. But it is important to use voodoo for good because whatever you do will come back to you; for every action, there is a reaction.”

Perhaps the emphasis on the good is why the people of Benin embrace Vodoun, alongside other religions. Every January 10, the people of the Republic of Benin celebrate their annual voodoo festival—a  day which is observed as a national holiday. 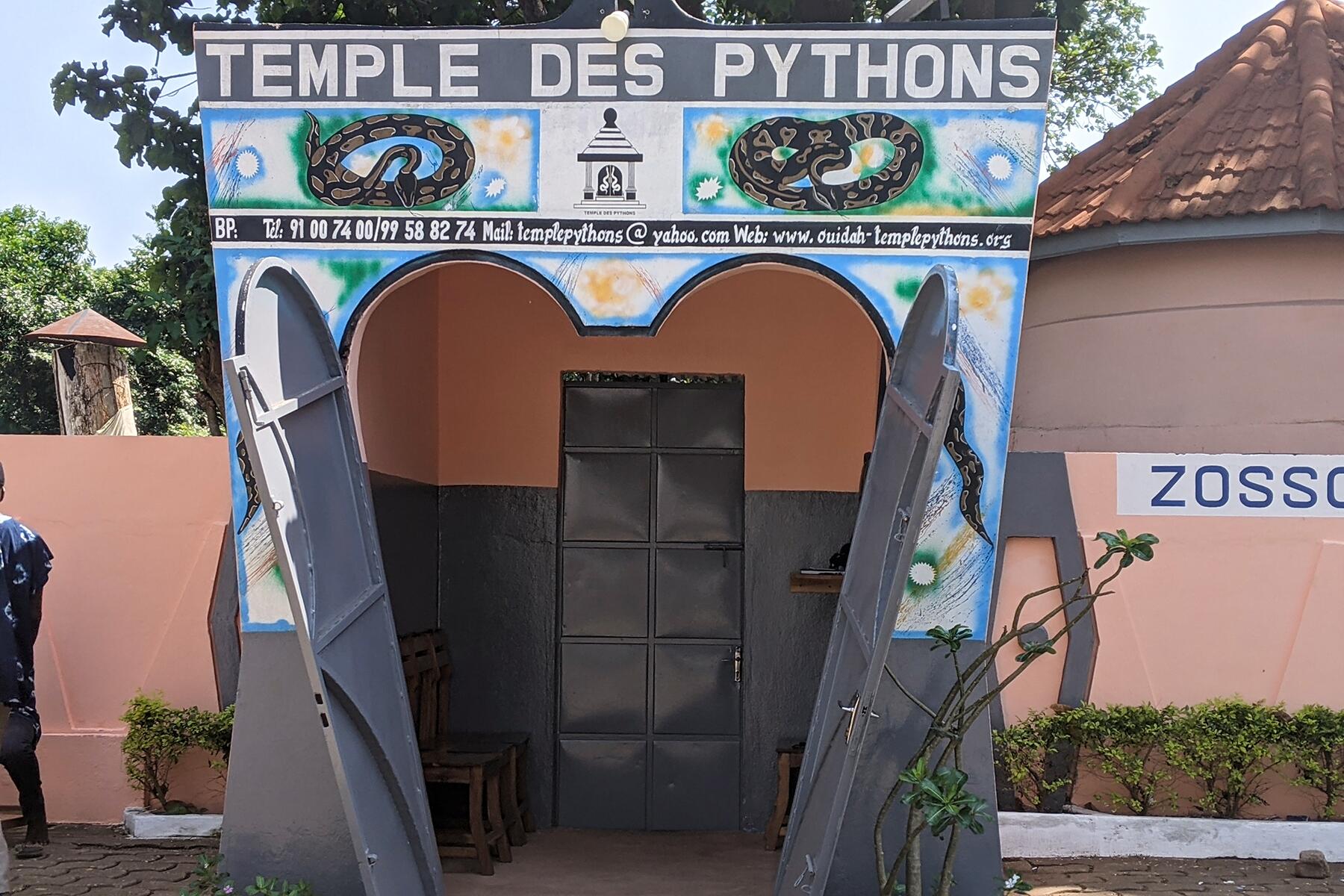 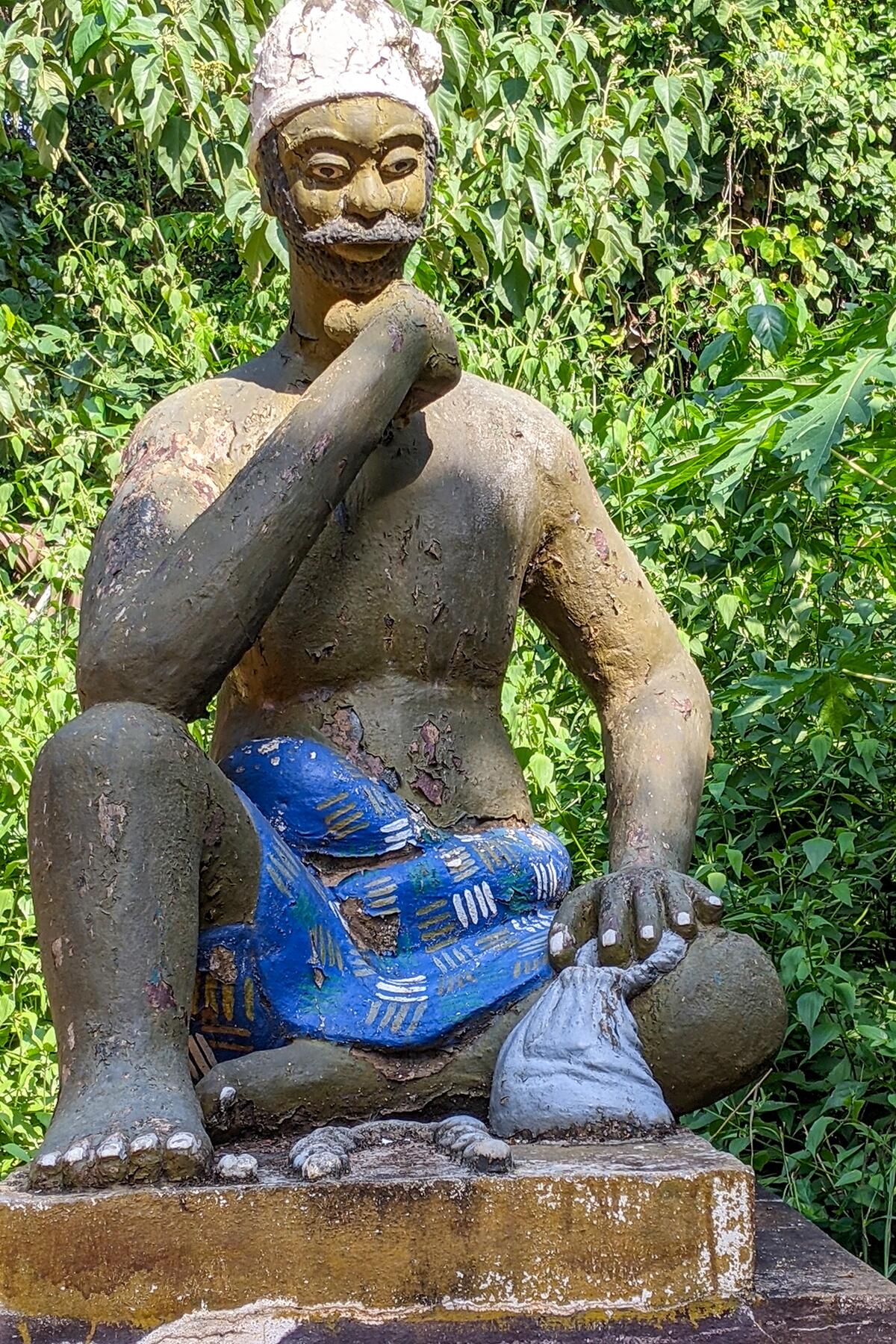 As we end the tour, we pass one last statue. Remi tells us, “Here is a worshipper, in one hand he has incense which represents Catholicism, and in the other, he holds the symbol of Vodoun. He goes to church in the morning and practices Vodoun in the afternoon. In Benin, many people do this.”

The birthplace of Vodoun embraces the religion of its ancestors in modern society. Much like the sacred forest thriving in the midst of a continuously developing city, the followers of Vodoun exist in harmony with believers of other religions.