Why be cute when you can be cool?

The first thing the uninitiated notice upon seeing Mexico’s national dog for the first time is that it’s naked as jaybird. Or, at least, the dogs seem naked, like you’ve caught them in some temporary state of undress. The second thing people (or, at least, people unfamiliar with indigenous Mexican languages) notice is that the breed name is something of a mouthful. Consequently, Anglophones tend to know them simply as the Mexican hairless dog. And while it succinctly addresses the breed’s origin and appearance, this description is merely (and quite literally) skin deep.

The breed’s Nahuatl name is Xoloitzcuintli (roughly pronounced “show-low-its-quintley” and frequently shortened to Xolo). Their namesake is Xolotl—the Aztec god of lightning and death, charged with protecting the sun during its nightly travels through the underworld. It’s an appropriately striking name for a dog whose story is rooted in the earliest history of the Americas and fought its way back from near extinction to find itself the exalted symbol of national pride.

In true “man’s best friend” fashion, Xoloitzcuintlis are believed to be descended from the New World Dog, an ancient breed that accompanied humans migrating across the Bering Strait from Asia into the Americas thousands of years ago.

This isn’t your doe-eyed, family sitcom golden retriever. The Xoloitzcuintli is all business—which is exactly the personality you want a dog tasked with leading you to the afterlife to have.

How the dog that came to be the Xoloitzcuintli developed its signature, full-bodied bareness isn’t known for certain. Presumably, it had something to do with the fact that the more temperate climes of Mexico were more comfortable sans fur. But it’s also been theorized that the trait developed as a way to deal with parasites.

The earliest evidence we have of Xoloitzcuintlis as we know them (hairless, pointy ears) is in the ceramic statuettes that have been found at archaeological sites throughout Mesoamerica. These figures, known as Colima dogs, date back as far as 3,000 B.C. These statuettes are frequently found in burial sites because while Xolos (and the deity for which they’re named) represent multiple things that vary from culture to culture (in Mayan mythology, for example, it was the dog that bestowed fire upon man) they are most consistently associated with death. 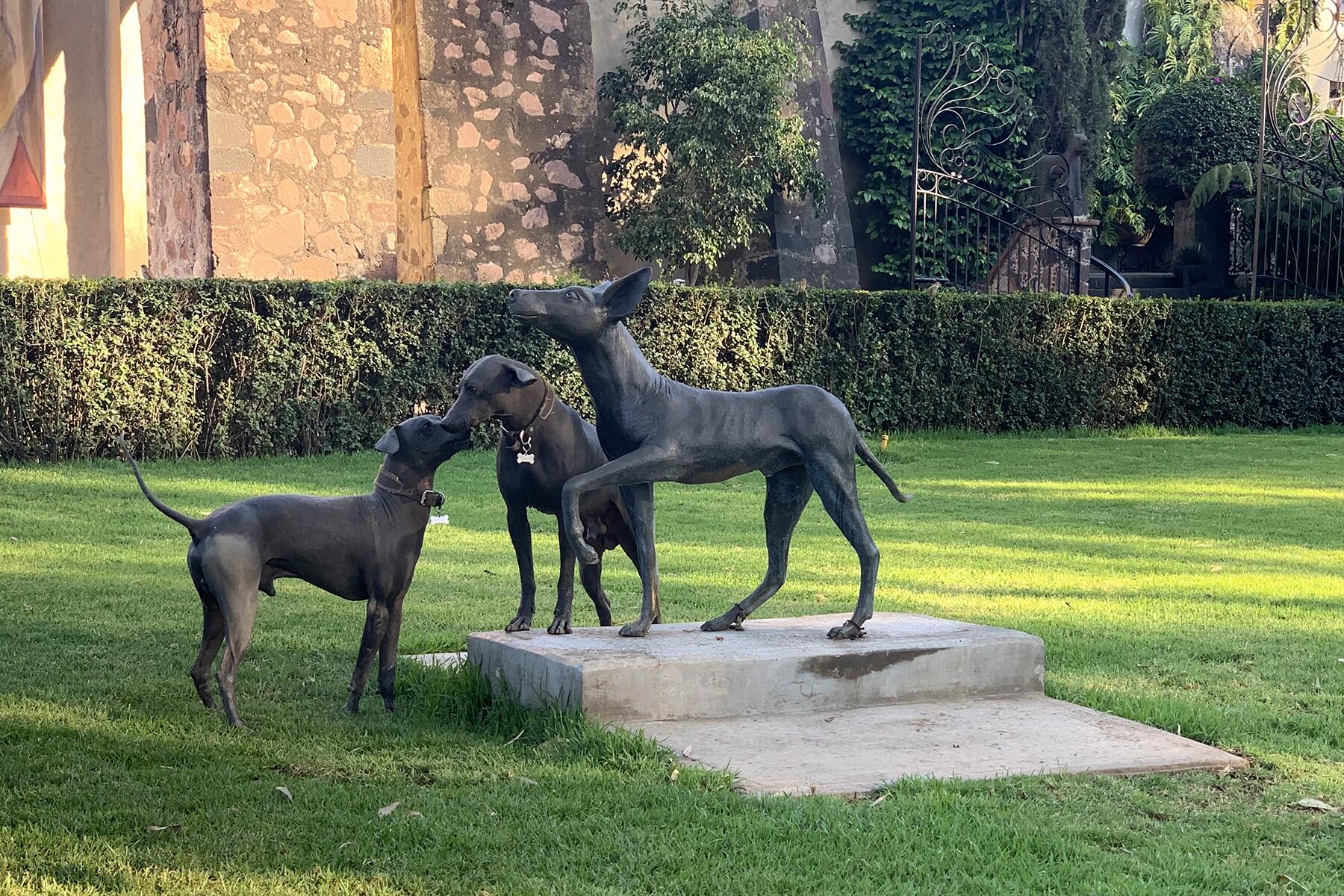 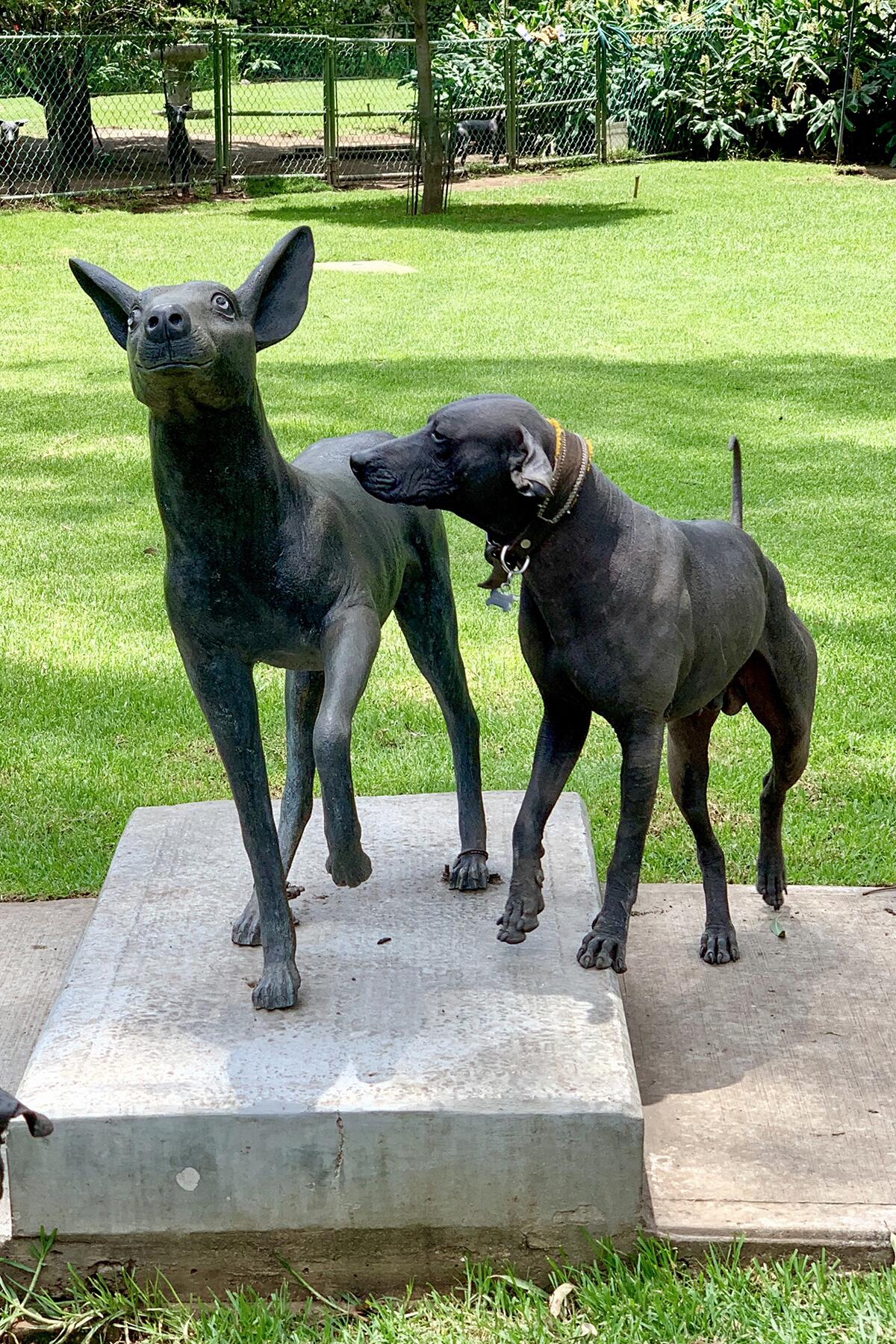 Mirroring the mythology of Xolotl, who is said to spend every night guiding the sun through the underworld of Mictlan, it is the charge of the Xoloitzcuintli to guide the souls of recently departed through land of the dead. According to National Geographic, these figures were found in 75% of the burials in the Mexican states of Colima, Nayarit, and Jalisco from the pre-classical period.

Despite (or perhaps because of) their exalted status, it wasn’t unusual for them to be eaten. In fact, they were considered a delicacy typically reserved for the most elite rungs of society.

This isn’t your doe-eyed, family sitcom golden retriever. The Xoloitzcuintli is all business—which is exactly the personality you want a dog tasked with leading you to the afterlife to have.

It was also believed that they possessed loosely defined healing properties. But it’s possible that this belief ultimately came about because they make for great hot water bottles.

The Xoloitzcuintli makes appearances in early accounts of European invaders. In 1492, Christopher Columbus remarked upon encountering hairless dogs in his journals and, during a scientific expedition,  Francisco Hernandez remarked on the “medium sized, rather heavily built” dog with “hair nearly absent except for a few coarse vibrissae and generally a sparse coating on the tail, particularly near the tip sometimes a tuft on the crown.”

And then for the next several hundred years, the Xolo all but disappears thanks to the Spanish conquistadors’ robust appetite for the easy source of protein and their signature traits being bred out by European canines. After centuries of exalted status, the breed slid into obscurity.

In 1956, the breed had just been added to the Fédération Cynologique Internationale, an international federation of national kennel clubs. But what was clear was that even with the increased interest in the breed, it would likely go extinct without intervention. An expedition was launched to scour Mexico for purebred Xoloitzcuintlis. The result was 10 dogs that became the basis of the breed’s revived population.

An (animated) Xolo also nabbed a starring role as an underworld-trekking sidekick in Coco in 2017. And if there’s any surefire way to ensure something will become beloved in America, it’s putting it in a Pixar movie. Just look at what Ratatouille did for rats!

In addition to their actual numbers rebounding, Xoloitzcuintlis have become a symbol of national pride and indigenous identity in Mexico. Frida Kahlo was a great lover of Xoloitzcuintlis. Not only did she own several but she included them in paintings like Love’s Embrace of the Universe, Earth and Itzcuintli Dog With Me. And, more contemporaneously, they’ve become the mascot of Club Tijuana, a professional football club and have become status symbols for those who can afford them.

Unfortunately, if you’d like to become the proud owner of one of these majestic creatures, it’ll run you a cool $1,000-$4,500. But for a chance to glimpse one of these dogs in person, you can stop by Museo Dolores Olmedo. The museum, located in the Mexico City neighborhood of Xochimilco, boasting a large collection of the work of Frida Kahlo, Diego Rivera, and pre-Hispanic art, is also home to a pack of Xolos. Upon the museum’s namesake and founder’s death in 2002, it was decided that it would continue her tradition of dedicating a part of the museum’s grounds to these dogs.

Much like their mythical psychopomp counterparts, the Xoloitzcuintli has walked an uncertain path over the last several hundred years—but they’ve finally emerged on the other side of a proverbial Underworld, the warmth of the sun radiating on their naked but nonetheless noble faces.