If you make the effort to gaze skyward in New York, you will discover (hiding in plain sight) a city teeming with remarkable architectural sculptures: gryphons and sea monsters, cherubs and pelicans, goddesses and kings. These exuberantly expressive artworks were the creation of gifted immigrant stone carvers who poured into New York in the late 19th and early 20th centuries, most of them from the British Isles, Germany, and Italy.

The ornament on the grandest edifices was typically specified by architects, but on the vast majority of city buildings, the design of the carvings was left up to the individual stoneworker. The carvers took this freedom and ran with it, incising their imaginations into New York’s skyline and transforming its streetscape into a marvelously quirky public art gallery.

Ever since my novel, The Gargoyle Hunters, was published, I’ve been besieged by readers asking me where to find the best architectural sculptures in town. Set in 1974 Manhattan, the novel tells the tale of a 13-year-old boy whose obsessive father sends him clambering around the tops of skyscrapers and tenements to rescue gorgeous carvings from buildings that are on the brink of demolition. The story is based on a true phenomenon, as thousands of these architectural ornaments were indeed lost to urban renewal after World War II. And enterprising scavengers—gargoyle hunters—did indeed rescue many of them for posterity.

Lucky for us, thousands more survive intact on New York’s buildings, and all you have to do to appreciate them is put down your smartphone and look up as you walk around town. Once you get in the habit, you may find yourself getting caught up in the thrill of the hunt. After years of gargoyle hunting with my camera, I still get a frisson of excitement every time I spot a human face or phantasmagorical beast nestled into the column capital of a brownstone or gazing down from a keystone above a tenement doorway.

The term gargoyle technically refers to waterspouts in the shapes of animal or human grotesques, like those that adorn the Cathedral Apartments at 555 Washington Avenue in Brooklyn. (Now a residential condominium, the gothic building was constructed in 1916 as the Cathedral College of the Immaculate Conception.) In colloquial usage, however, gargoyle has come to refer more broadly to all manner of stone carvings and terra-cotta castings that routinely decorated buildings constructed in Gilded Age New York and in the early 20th century. A 1962 New York Herald Tribune Sunday magazine cover story, “Gargoyle Hunting in New York,” described a subculture of do-it-yourself preservationists who conducted clandestine raids on demolition sites to rescue such architectural sculptures.

The photographs accompanying this article represent a sampling of the multifarious ornamental treasures to be found around town. Below are a few of my favorites: 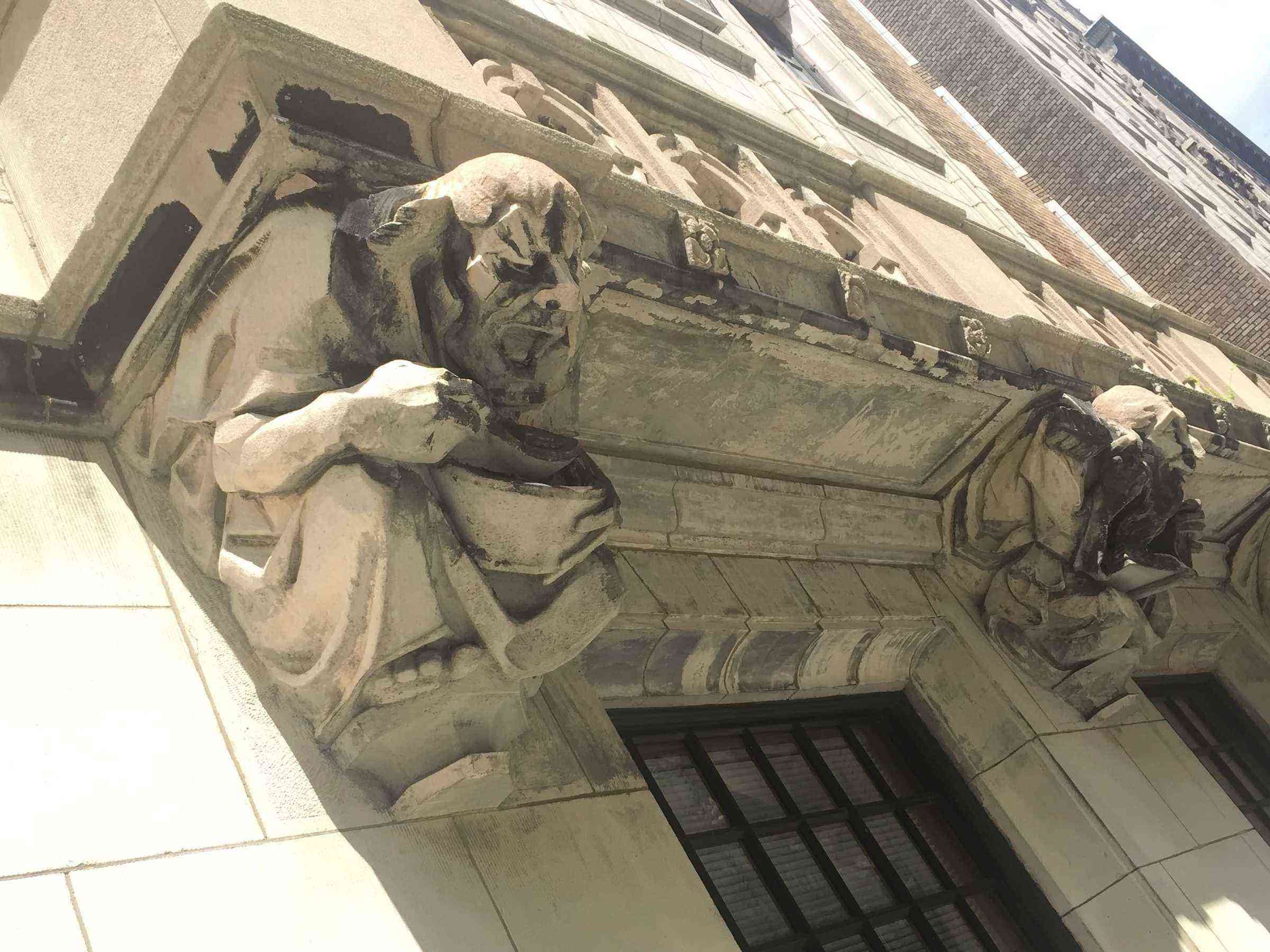 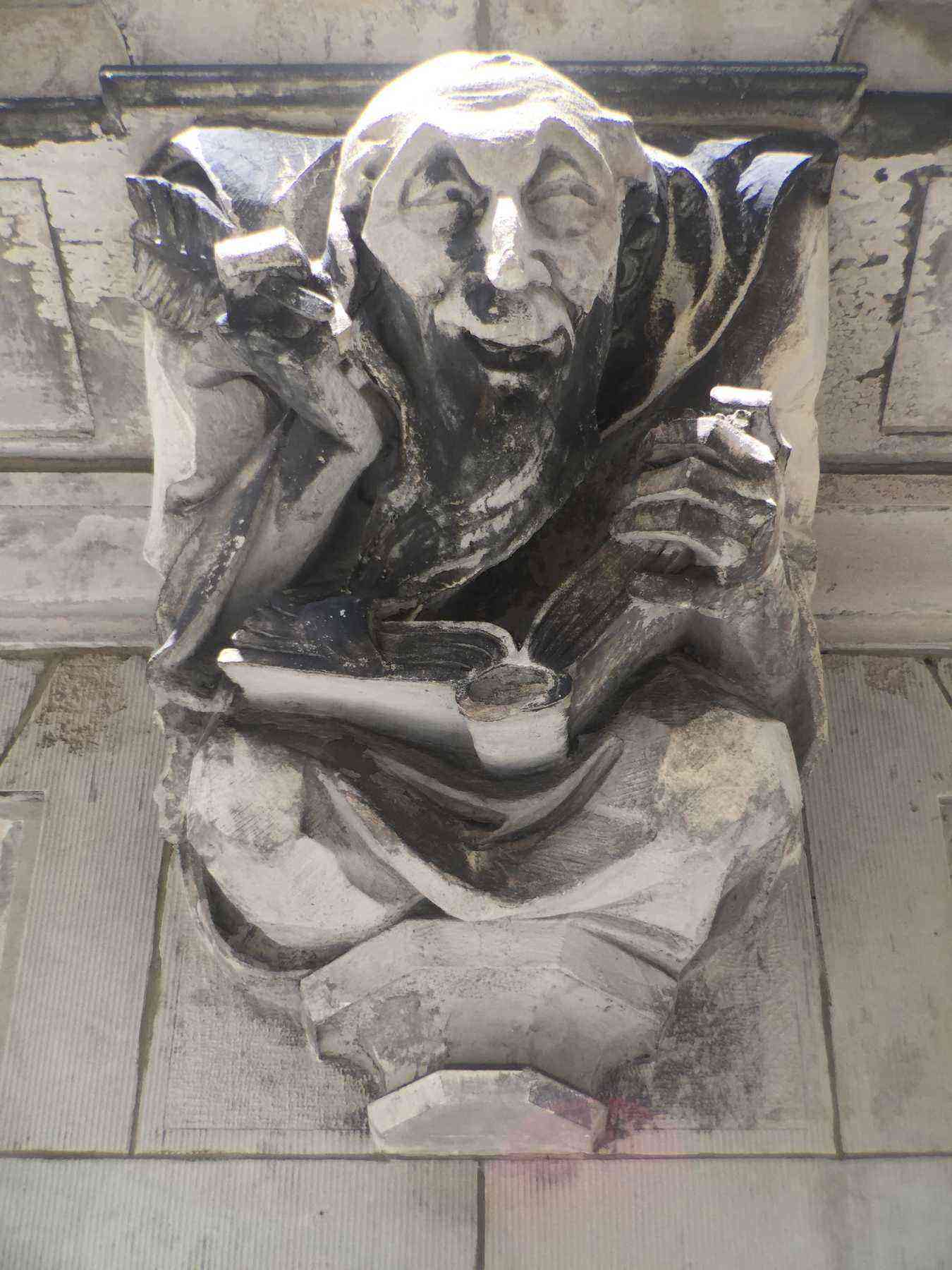 A gang of cartoonish limestone gargoyles has loitered since 1909 at the front of the Britannia, an apartment house at 527 West 110th Street. Biding their time above the first floor, the loiterers include a cook tasting the contents of a pot, a barefoot fellow spooning soup down his gullet, and a shifty-eyed man with a flowing beard who seems to be doing math in his head as he writes in a ledger with a quill pen. Another pair of whimsical gargoyles flanks the entrance to the lobby. 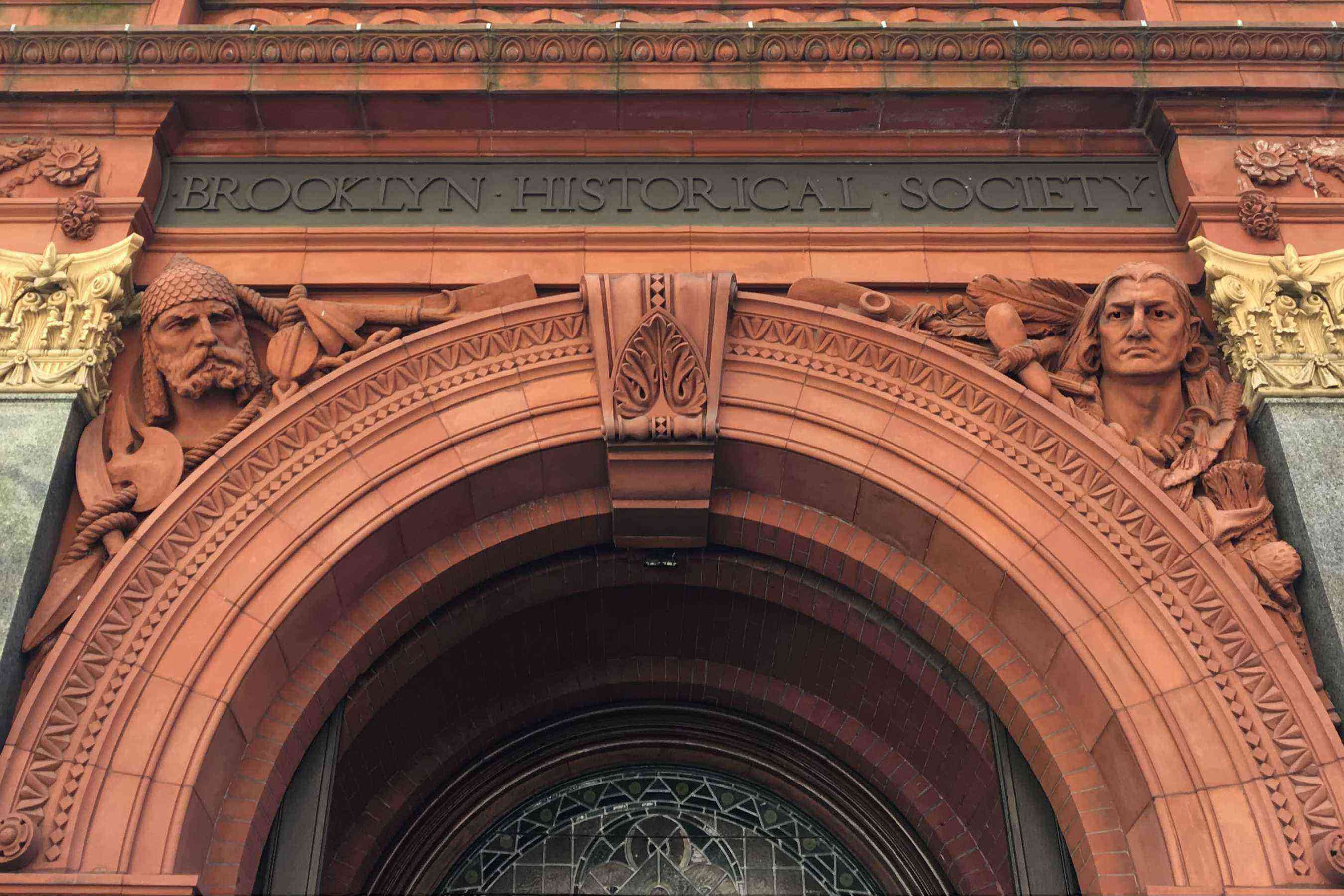 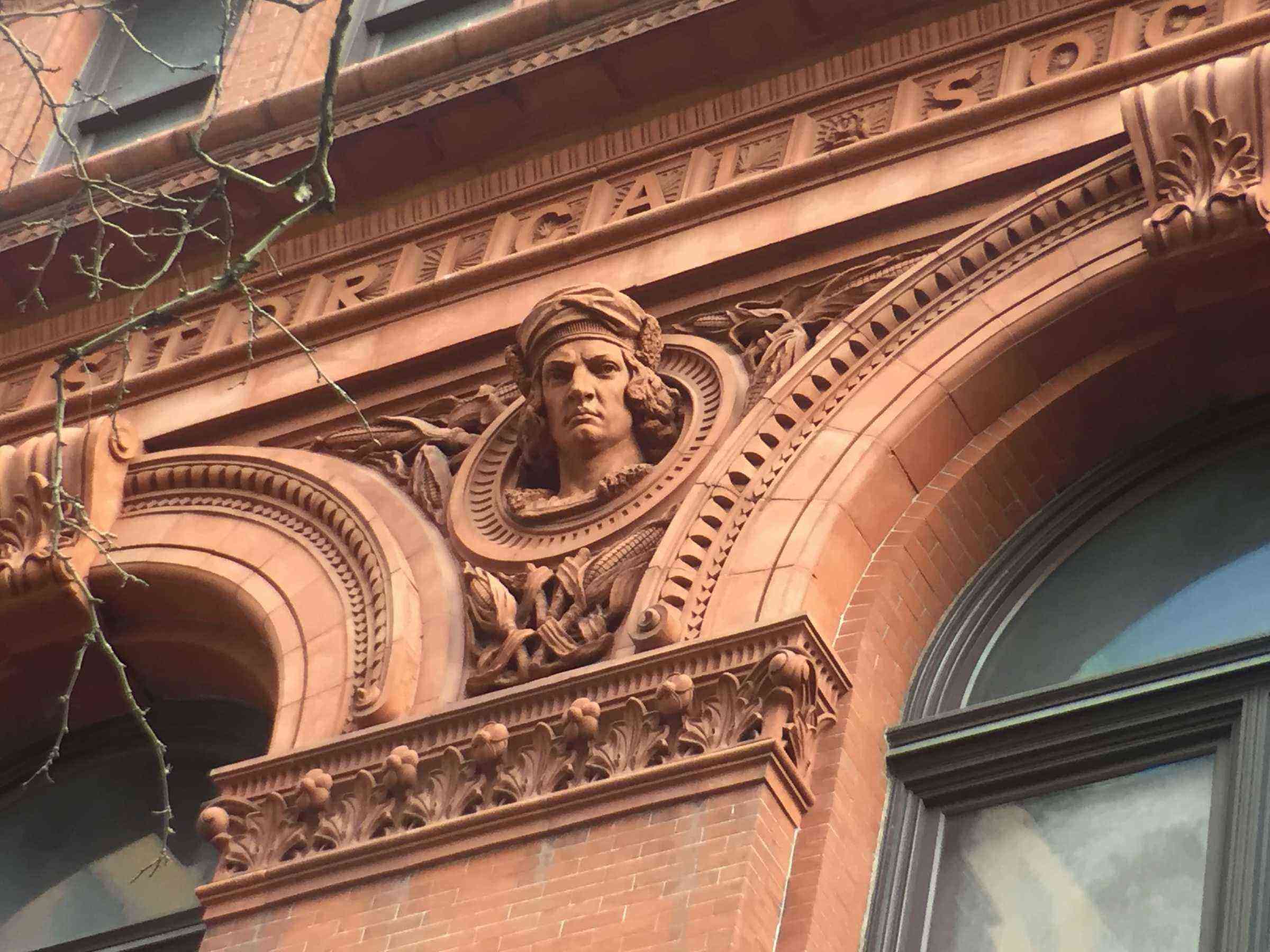 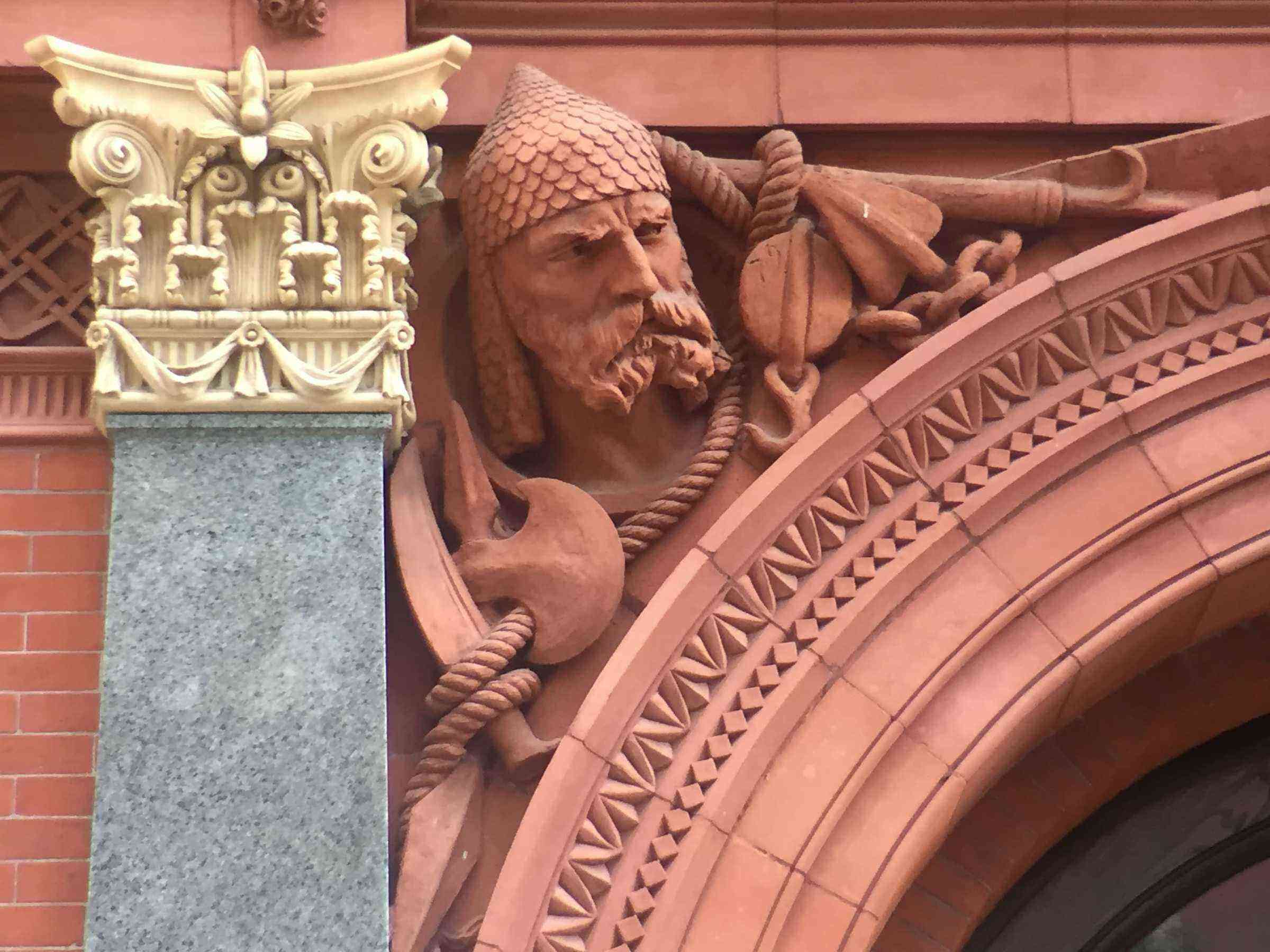 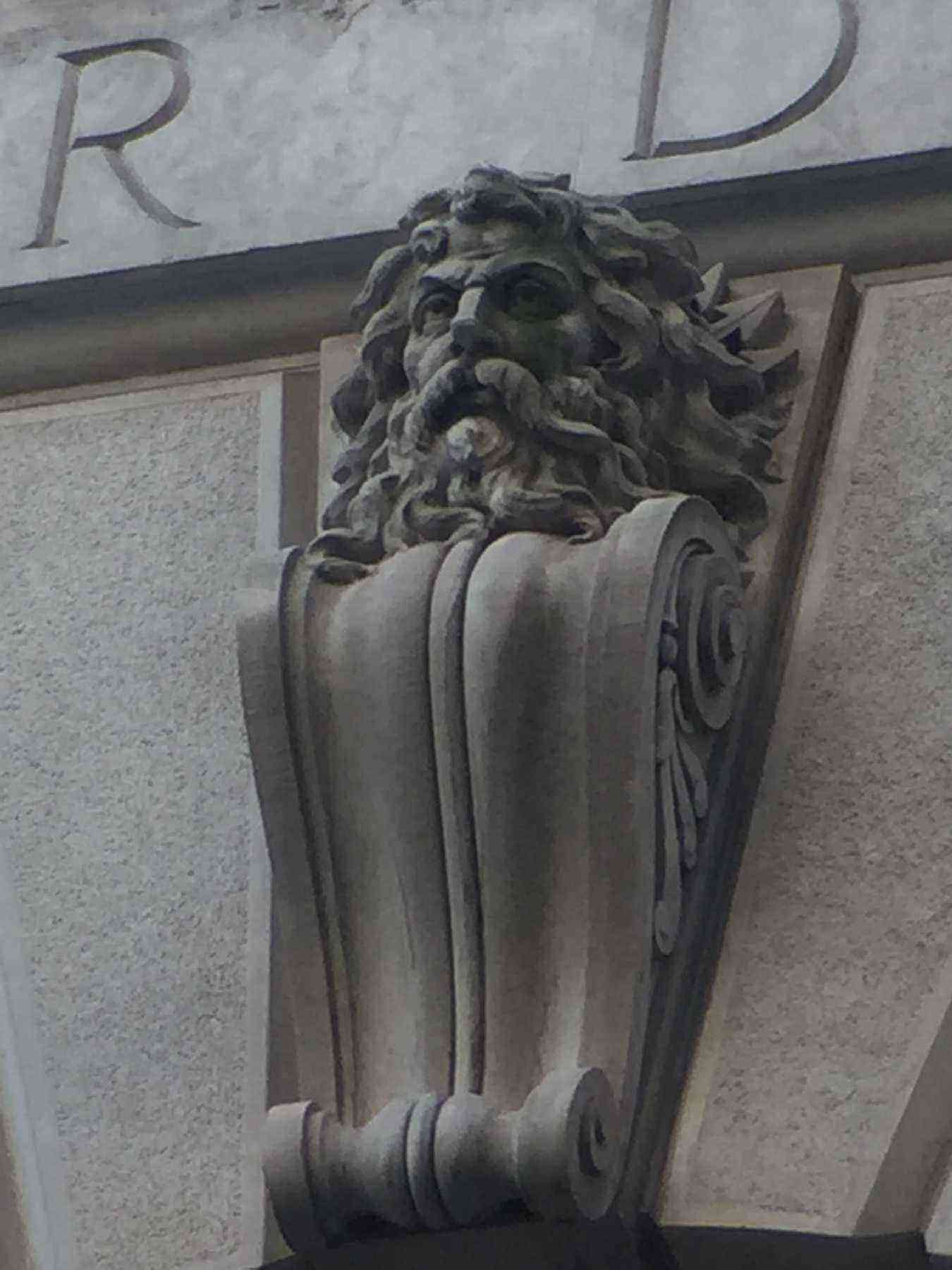 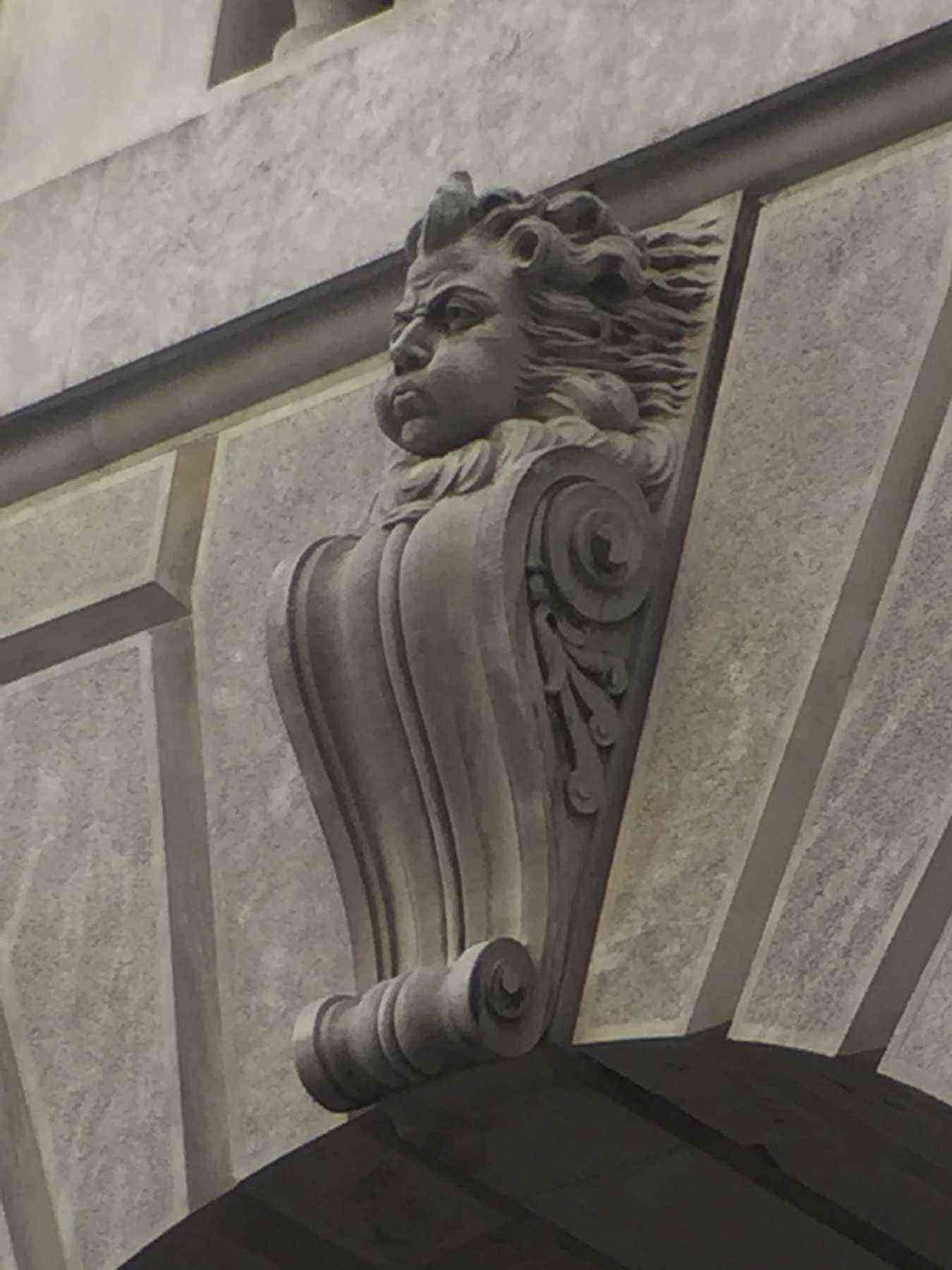 Mermaids frolic above street-level windows. Higher up, one can spot a band of alternating compasses, tridents, and nautilus shells.

The limestone façade of the 22-story Cunard Building at 25 Broadway, built in 1919 for the Cunard Steamship Line, is richly festooned with nautical carvings. The keystone of the central entry arch is carved with a portrait of the Roman sea god Neptune with his trident, while other keystones depict Roman wind gods with wind-whipped hair and puffy cheeks.

At the nineteenth floor, scarcely visible from the street except with binoculars, are riders mounted on giant seahorses; each sculpture weighs nine tons, according to a 1921 New York Times article. 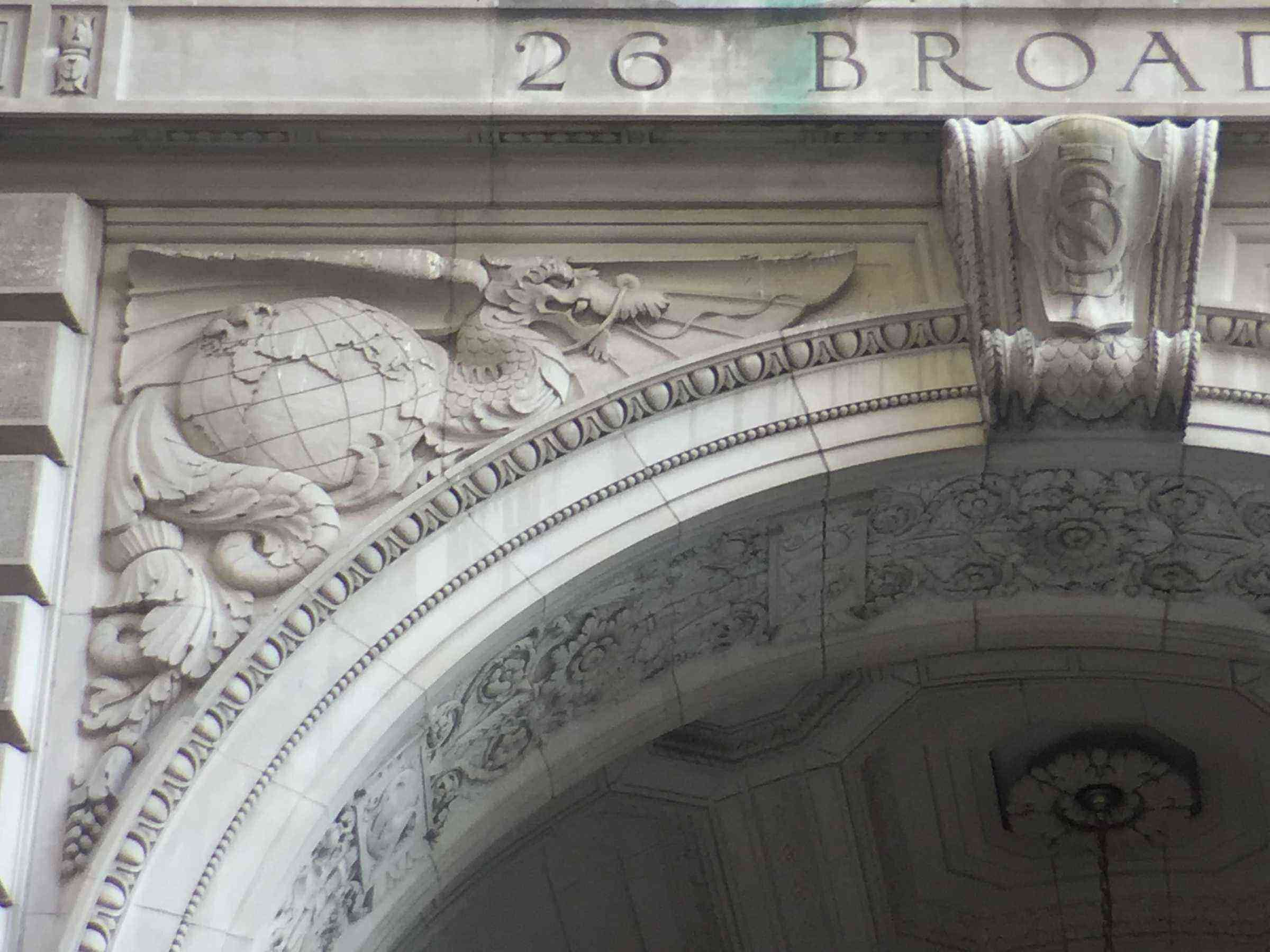 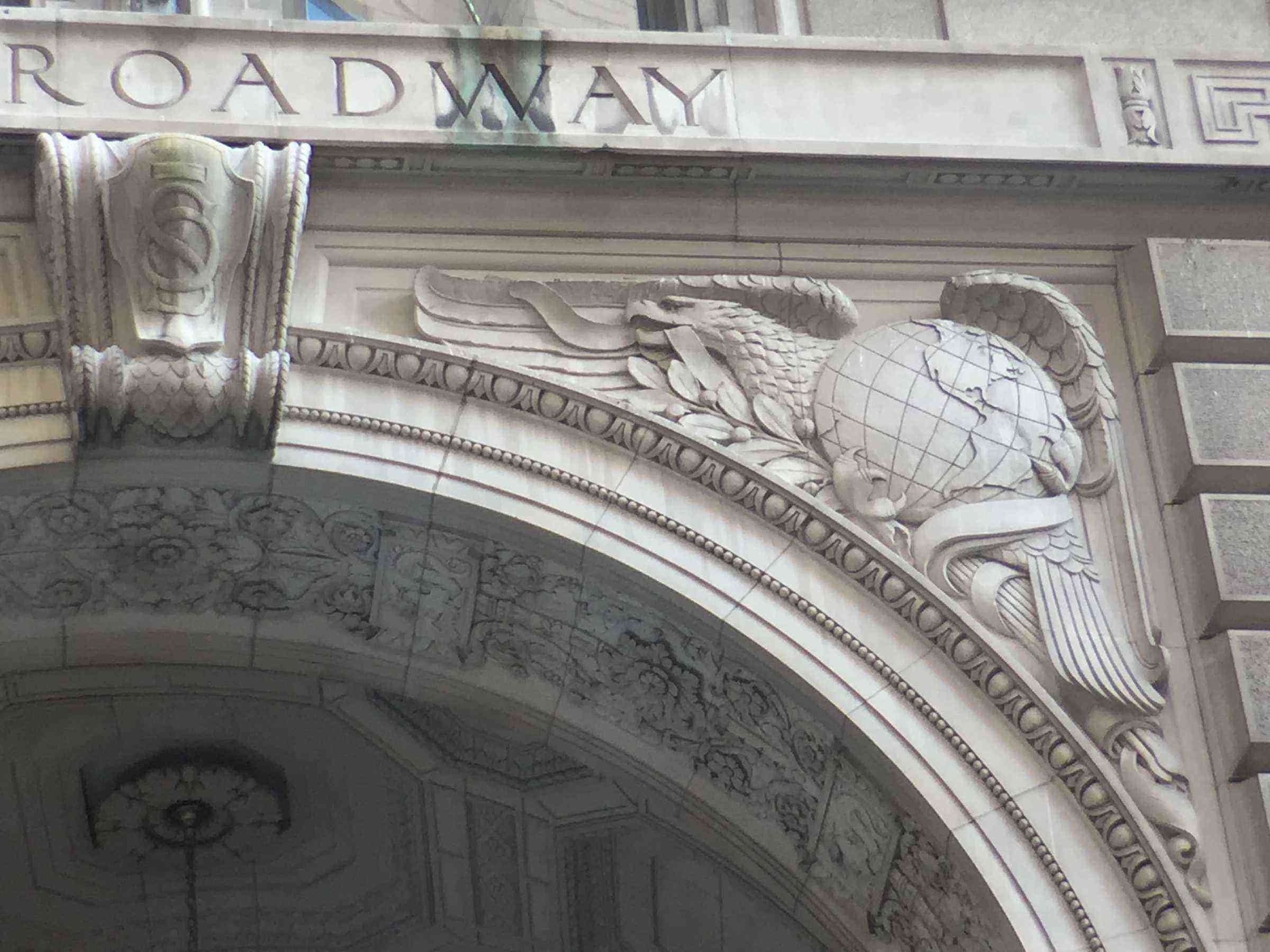 Intricately embellished terra-cotta Indians adorn the spandrels of the Gramercy, at 34 Gramercy Park East, while a pair of ferocious, roaring lions recline above the entrance. Built in 1883 as the Gramercy Park Hotel, the building is described by the AIA Guide to New York City as “a craggy, mysterious red-brick and red terra-cotta pile whose Queen Anne forms are among the city’s most spectacular.” Movie gangster Jimmy Cagney lived here from 1965 to 1968. More recently, Jimmy Fallon, host of The Tonight Show, bought several units in the building, which is now a co-op. 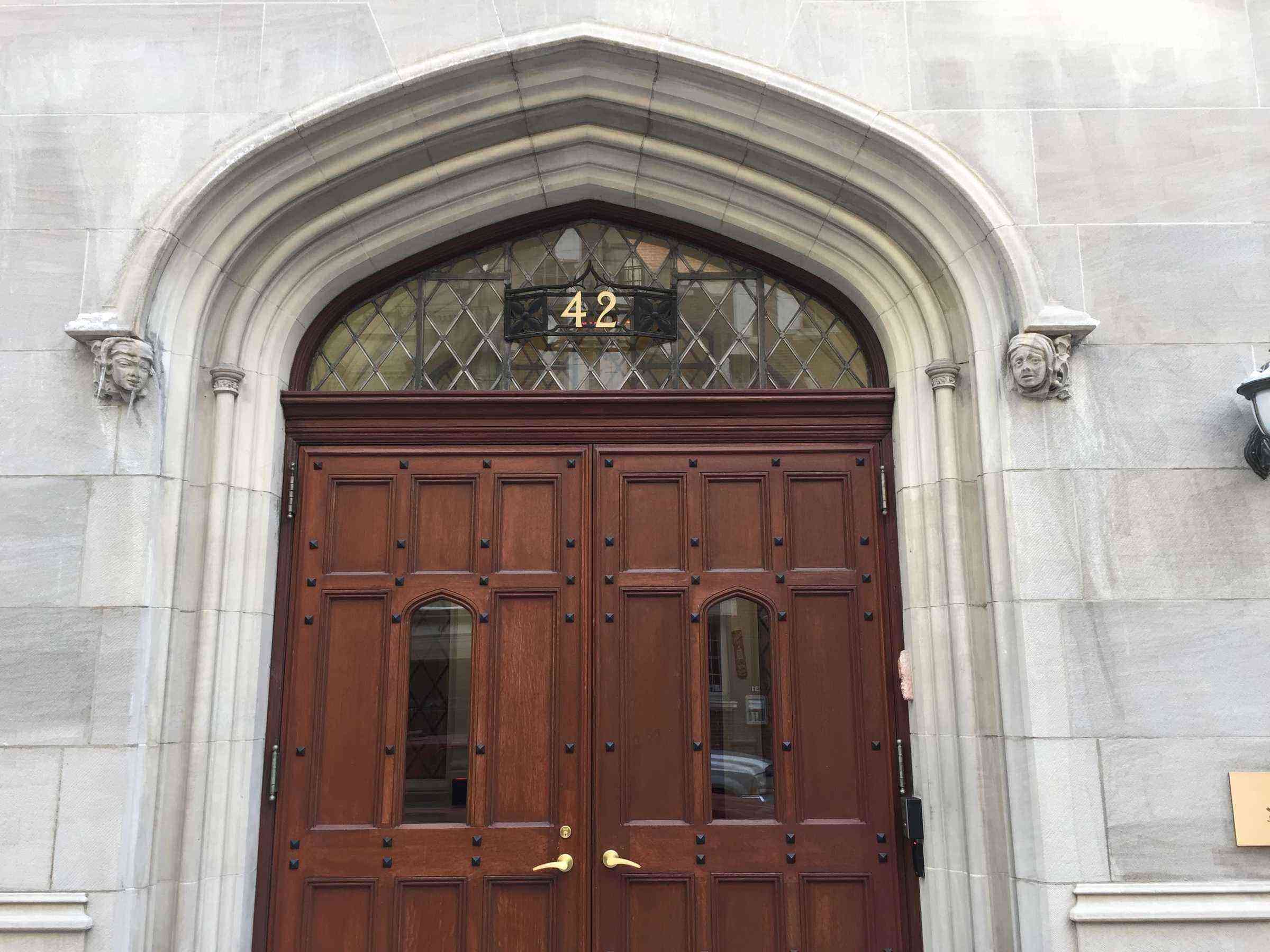 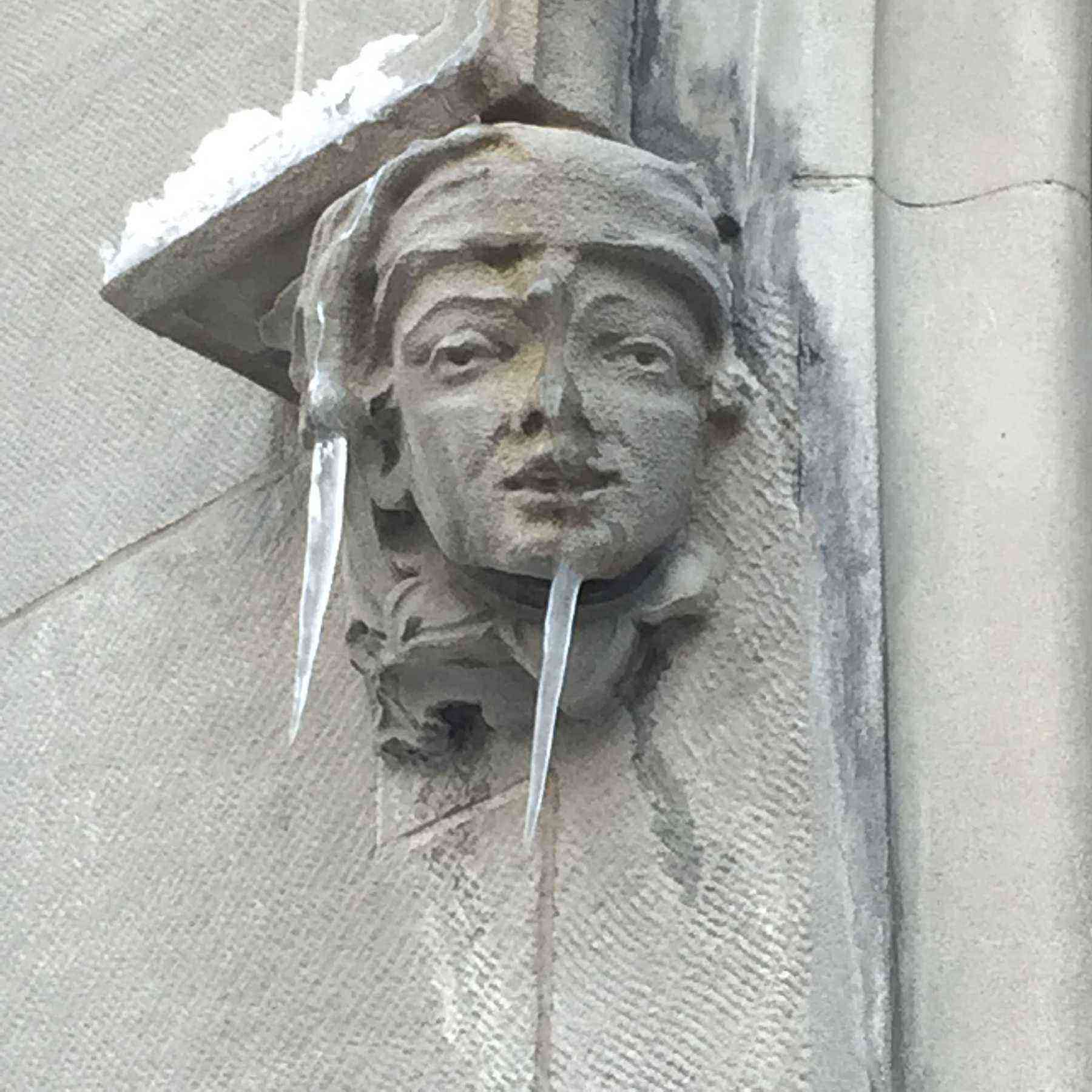 A chilly sentry, hewn from limestone, keeps watch at the entrance of the medieval-style Jewish National Fund at 42 East 69th Street, built in 1921 as the home of Arthur and Alice G. Sachs.

A bestiary in stone at 116 East 68th Street, a pre-war apartment house near Park Avenue.

While many carvings depict mythological or biblical figures like Athena or Moses, New York’s immigrant artisans sometimes sculpted distinctive keystone portraits of people in their lives, whether local city characters, their wives, or each other. A row of brownstones on 1st Street in Park Slope, Brooklyn, is enlivened by many such portraits, including these two. Original carvings like these are comparatively rare, and a special pleasure for a gargoyle hunter.

This expressive keystone portrait, carved above the front door of a 1st Street brownstone in Park Slope, Brooklyn, is similar to one stolen from an Upper West Side façade by the father-and-son thieves in the novel, The Gargoyle Hunters.

If you’d like to learn more about this world of architectural splendor and whimsy, check out The Gargoyle Hunters, which is full of scenes of the rescue (and theft) of extraordinary city sculptures, including the perilous removal of the last gargoyle on the 54th floor of the Woolworth Building, the iconic 1913 neo-gothic skyscraper at Broadway and Park Place.