Arts & Culture Laura Wheatley He Built a Temple Complex to Honor His Mother. What Are You Doing for Mother’s Day?
Home  >  Arts & Culture   >   Art Lover’s Guide to Washington, D.C.

Washington, D.C., has its own style. Against a backdrop of classical giants like the National Gallery of Art, the nation’s capital boasts a fresh, dynamic, experiential scene that continues to morph and transform in exciting new ways. Here are some must-see artistic hot spots to keep an eye on. 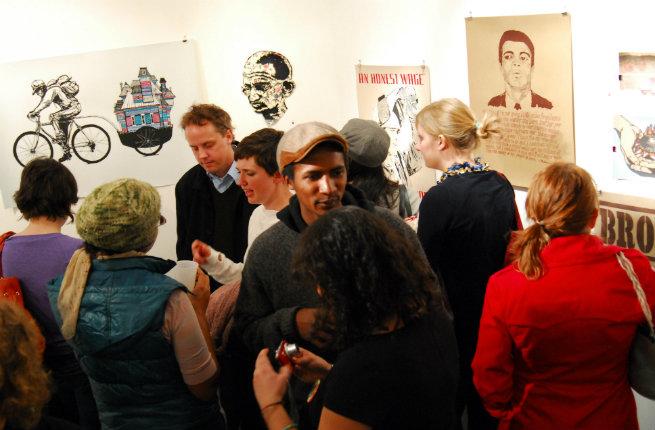 In a city of rising rents, the traditional brick-and-mortar display space is becoming an endangered species. One solution? Pop-up art shows that rove around the city. Keep an eye out for Quota and Wild Hand Workspace, and check Eventbrite for other possibilities. Other artsy scenes include Pleasant Plains Workshop, a self-proclaimed arts incubator that showcases the work of local artists; Hole in the Sky, a DIY space; District of Columbia Arts Center, devoted to helping fledgling artists gain a foothold; and Hillyer Art Space, a Dupont Circle art gallery that hosts First Fridays, a gallery crawl including live music and wine.

The Classic: D.C.’s Answers to the Frick Museum 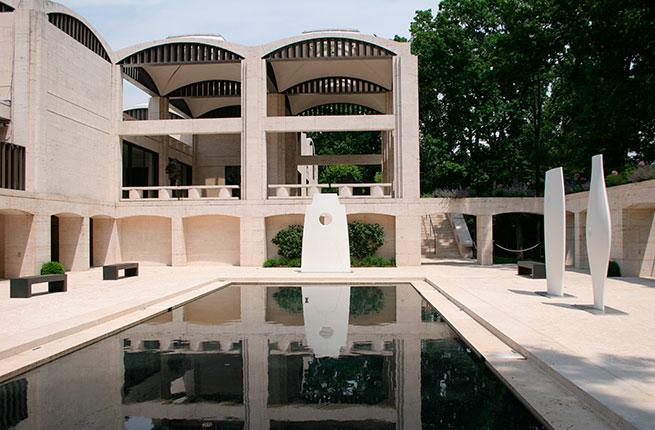 There’s something special about viewing art in the intimacy of a home, and Washington offers three fabulous opportunities to do so. The Phillips Collection displays one man’s devotion to art in the rambling rooms of two connected mansions near Dupont Circle. The star of the show is Renoir’s famed “Luncheon of the Boating Party,” depicting jaunty young Parisians taking a break on a Seine island. When museum founder Duncan Phillips first laid eyes on the painting in a Parisian town house in 1924, it was not for sale. He offered $125,000 (a huge amount of money at the time) and walked away with it. People travel thousands of miles to the Phillips home to see the painting, which became the cornerstone of the nation’s first private art museum. There are many other stellar works in these homey rooms as well, including Jacob Lawrence’s magnificent series on the underground railroad and a room full of Rothkos. And the gallery keeps growing. Just recently, the Laib Wax Room was added, Wolfgang Laib’s masterful beeswax chamber lit with a single bulb.

Hillwood Estate, Museum and Gardens is a perennial favorite, set amid lush gardens in Northwest D.C. The onetime home of heiress Marjorie Merriweather Post, who was married to the Russian ambassador during the Russian Revolution, this lavish home showcases her stunning collection of Russian art—Fabergé eggs foremost among them. Post was also a connoisseur of French art, which is found sprinkled throughout as well. She knew the value of her collections and wanted to share them with the public, so she set up her house as an amazing museum before she died.

The Kreeger is tucked away in a residential neighborhood north of Georgetown. It features Impressionists and American artists from the 1850s to the 1970s. Insurance attorney David Kreeger and his wife, Carmen, purchased works for love, not investment, and were especially drawn to color and texture. So within the walls of their 24,000-square-foot, post-Mediterranean home (designed by Philip Johnson in 1963), you’ll find Picassos (13 of them), Cézannes, Mirós, van Goghs, a whole room of Monets, and more. The pre-blue-period Picasso, “At the Café de la Rotonde,” and an early Mondrian, a perfectly realistic windmill (“Oostzijdse Mill with Panoramic Sunset, Mill at Center”), are especially intriguing. The sculpture garden outside contains large-scale works by Henry Moore, Hans Arp, and more; picnicking is encouraged.

The Edgy: The Renwick Gallery 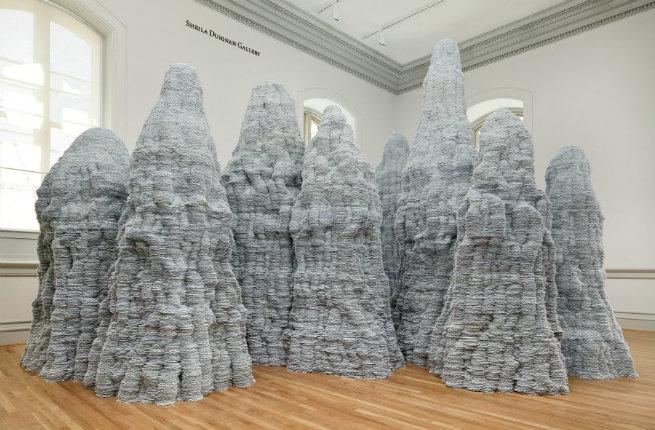 The Renwick Gallery, a branch of the Smithsonian American Art Museum, recently closed for two years, undergoing an extensive renovation that would mesmerize the art world. It reopened in November 2015 with a new motto: “Dedicated to the Future of Art.”  Nine American contemporary artists were commissioned to create site-specific, room-size, one-of-a-kind masterpieces such as Gabriel Dawe’s floor-to-ceiling rainbow made of 60 miles of polyester thread and Patrick Dohert’s architectural gathering of branches that he’s collected from around the world. That exhibit closes completely in July 2016, and new exhibits are in the works. This is one museum to watch for its audacious role in reinterpreting art.

The Historic: National Museum of Women in the Arts 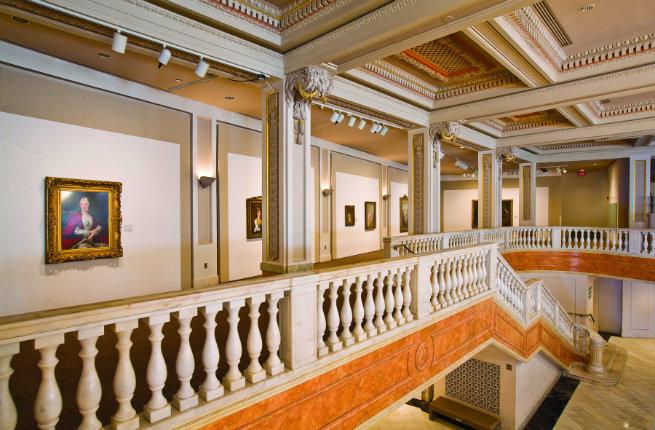 Some may argue that men seem to get all the credit, at least in the early days of art. Women finally get their due at the National Museum of Women in the Arts, a glorious museum housed in a beautifully designed Masonic Temple that showcases centuries of women artists. You’ll find sublime masterpieces by some of America’s most talented women artists, including Frida Kahlo, Mary Cassatt, and Georgia O’Keeffe. But what’s unique about this museum is that it celebrates women artists who didn’t necessarily receive the accolades or fame they may have deserved in their day, including Lavinia Fontana (look for her “Portrait of a Noblewoman,” ca 1580), Rosa Bonheur (“Highland Raid,” 1860), and Justine Kurland (“Waterfall Mama Babies,” 2006). 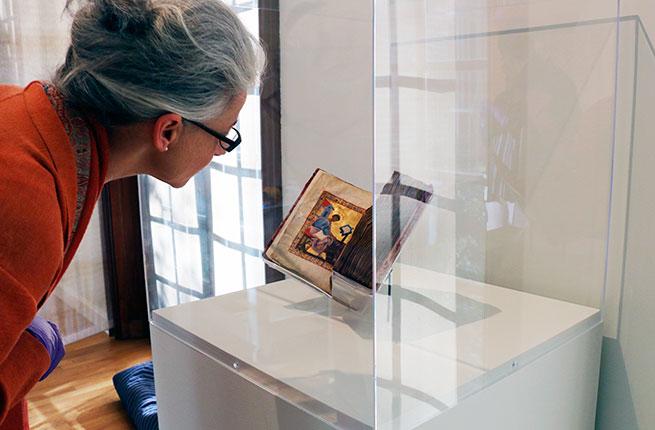 Georgetown’s Gardens at Dumbarton Oaks are heralded for their year-round beauty, and rightly so—they were designed by famed landscape architect Beatrix Ferrand, after all. But few know that a unique, world-class collection of art is on display in the associated house, Dumbarton Oaks. The Blisses, who oversaw the creation of the garden, also devoted themselves to their artistic passions: Byzantine and pre-Columbian art. What mesmerized the Blisses were the intricate detail and fine craftsmanship of each object d’art—this is a museum that you need to get up close to each piece and truly appreciate. In the Byzantine collection you’ll find rare coins, cloisonné enamel, late Roman and Byzantine jewelry, and gold, silver, and bronze vessels used for celebration of the Eucharist. But it’s the pre-Columbian gallery that’s the true show-stopper. Housed in a circular, glass-and-travertine wing designed by Philip Johnson in 1959, you’ll find glistening displays filled with treasures from ancient Latin American cultures, including sparkling gold pectorals, ceremonial jewelry, and stone carvings of Aztec deities and animals. In-the-know researchers seek out Dumbarton from far and wide—it’s about time that locals, and visitors, do the same.