The gallery show that began as a blip on the screen of collectors and became a major international event within a decade brings of-the-moment art, plus sceney gatherings and all-night parties to Miami Beach for the next four days. 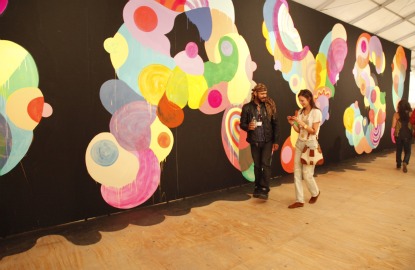 Art Basel Miami Beach showcases works from more than 2,000 artists of the last two centuries, along with the 260-plus galleries from around the world that are participating. This year, roughly half of the exhibitors are from outside the U.S., coming mostly from Europe. There are also 26 galleries from Latin America, nine from Asia, and two from Africa.

Special events and performances throughout Miami Beach are on-deck to mark the show’s 10th anniversary. Among the highlights are a large video art projection on an outer wall of the New World Center, designed by Frank Gehry, and a vast public art space in Collins Park, created from a new collaboration with the Bass Museum of Art.

Related exhibits coinciding with Art Basel are being shown at South Florida’s museums, including British artist Jenny Savile at the Norton Museum of Art in West Palm Beach, sculptor Mark Handforth at MOCA North Miami, and the U.S. debut of works from Enrique Martinez Celaya at the Miami Art Museum.

Just as in years past, homes and warehouses that have some of Miami’s most important private collections—such as the De la Cruz Collection Contemporary Art Space and the Margulies Collection—will be open to those with Art Basel tickets.

The show takes place daily from noon to 8 p.m. and Sunday from noon to 6 p.m., with the majority of it the held at the Miami Beach Convention Center. The Art Basel Miami Beach web site has an excellent floor plan of the galleries, as well as apps to download for the show. There’s also an online catalog for a preview of artists, artwork, and galleries, as well as information on guided tours from ArtNexus.

Heading down to Miami for the show?
For up-to-the-minute restaurant and hotel recommendations, plus the best nightlife and more, check out our online Miami Travel Guide.