To Do: Plan Next Year’s Antarctic Cruise Now

Now is the time to start planning a trip to Antarctica, the Great White Continent. It’s perhaps one of the last untouched patches of nature on the planet. If you love wildlife you’ll be amazed by the variety of animals that make their home in a location with such an inhospitable climate. You’ll see everything from seals and penguins to whales and albatross.

It’s not easy to get to Antarctica, but it is well worth the trip. You’ll need to board an expedition ship with ice-class reinforced hulls and topnotch communications equipment. These days, a variety of ships—including a few that target the luxury demographic—sail itineraries in the region.

When to Visit Antarctica

Cruise ships visit the South Pole every summer, which in the southern hemisphere runs from November through March. It will be coldest in November but landings will be more pristine since the season is just beginning and visitors haven’t yet muddied the most popular sightseeing spots. Expect up to 20 hours of daylight during December and January. These are the months when penguin chicks begin hatching. If you’re most interested in whales, it’s best to visit later in the summer, in February and March. 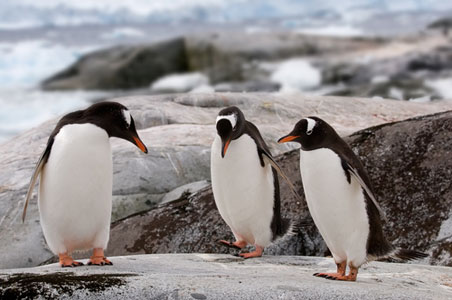 Most Antarctica expeditions begin and end in Argentina with embarkation/debarkation in either Buenos Aires on the northeast coast or Ushuaia on the island of Tierra del Fuego off the southern tip of the country.

From Ushuaia you’ll sail the Beagle Channel and then make your way into the Drake Passage that’s known for its rough seas before arriving at the Antarctica Peninsula. Here are a few of the highlights on the peninsula…

Aitcho Islands: In the South Shetland Islands at the entrance to the English Strait. You’ll encounter gentoo and chinstrap penguins as well as annual seabirds like the Southern giant petrel. Watch for leopard seals and southern elephant seals in the water.

Brown Bluff: On the Tabarin Peninsula. This ice-capped, 2,200-foot flattop bluff on the Continent is impressive. Adelie and gentoo penguins live here amid pintado petrels and gulls.

Paradise Bay: Known for its mountains, glaciers, and icebergs as well as its Argentinian research station, dubbed Base Brown. This is where you’ll actually set foot on the Continent. Watch for Minke whales and crabeater seals.

Paulet Island: Get your cameras ready to snap pictures of those impossibly blue icebergs that seem to glitter like diamonds in the sunshine. The island itself is home to an estimated 80,000 Adelie penguins.

Port Foster: Whalers Bay on Deception Island. Have you ever sailed inside a collapsed volcano? You will on your tour to Deception Island. Some ships enter the caldera through a narrow entrance called Neptune’s Bellows.

Port Lockroy: On Goudier Island. The British erected a listening station here during World War II and it was then used as a research station intermittently throughout the years. There’s a museum and gift shop here as well as gentoos and snowy sheathbills. 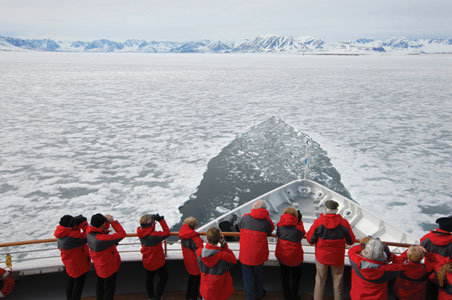 Now that you’re revved up and ready to sail to Antarctica you’ll need to select your cruise line. Here’s a look at who’s currently offering itineraries aboard expedition-style vessels.

Hurtigruten’s MS Fram is a well-priced favorite that welcomes 256 travelers aboard each voyage.

The 148-passenger National Geographic Explorer is the ship Lindblad Expeditions takes to the Great White Continent every summer. Lindblad’s been visiting Antarctica since 1966. Knowledgeable naturalists and National Geographic photographers sail each voyage.

Then, Orion Expedition Cruises is a good bet for anyone approaching Antarctica from Down Under. This Australian cruise line offers several round-trip voyages out of Bluff, New Zealand as well as itineraries between Hobart, Tasmania to Dunedin, New Zealand.

Silversea Silver Explorer is one of the expedition ships geared toward the luxury market. The vessel accommodates 132 guests with a crew of 117.