Pop Art is about to take over Las Vegas when the new Andy Warhol exhibit opens at the Bellagio Gallery of Fine Art on Feb. 8. Dubbed "Warhol Out West," the exhibit celebrates his exploration of the worlds of artistic expression, celebrity culture, and advertisement colliding. 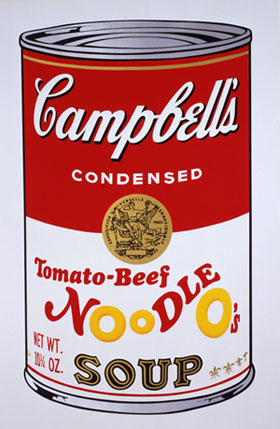 The Andy Warhol Museum in Pittsburgh, Warhol’s hometown, partnered with the Bellagio on an exhibition that includes 59 paintings, sculptures, photographs, screen prints, and wallpaper. Exhibits include Warhol’s 1960s Pop paintings of celebrities and consumer products; the 1980s advertisement series; the beloved "Double Elvis" painting; and his rarely seen "Cowboys and Indians" series. Look for pieces depicting everything from Liz Taylor and a Campbell’s Soup can to a Brillo Box and Geronimo.

The exhibit will be the only comprehensive Warhol exhibition in the United States outside of the museum in Pittsburgh. This is also the first time the Bellagio Gallery of Fine Art collaborated with the Andy Warhol Museum in Pittsburgh, providing the gallery with the opportunity to exhibit the breadth of Warhol’s work

"Warhol Out West" will be on view through Oct. 27, 2013. Tickets are $16 for general admission; $13 for Nevada residents and seniors 65 and older; and $11 for students, teachers, and military with valid ID. Children 12 and younger are free. Tickets and information are available by calling 702-693-7871 or 1-877-957-9777, or online. Audio tours are included in the price of admission and complimentary docent tours are available daily at 2 pm.

The Bellagio Gallery of Fine Art is open daily 10 am to 8 pm. Last admissions are sold 30 minutes before closing.