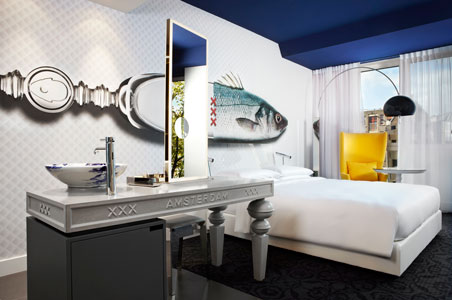 With somewhere around 50 world-class museums in Amsterdam—including Rijksmuseum Amsterdam, the Van Gogh Museum, and the six-months-old EYE Film Institute—there’s no mistaking that it’s an artsy destination.

The Andaz Amsterdam Prinsengracht, which opens next week in an amped-up space that was formerly the city’s historical public library, mirrors that status. Designed by Marcel Wanders, it houses the world’s largest video-art collection, for example, with screens in guest rooms, the reception area (nine 60-inch televisions), and on each of the hotel’s six floors. Artists who created the 40 unique pieces of video art include Ryan Gander, Erwin Olaf, and Mark Titchner.

As a boutique brand within the Hyatt umbrella, there are eight other Andaz properties—in Napa, London, New York City, West Hollywood, and Shanghai, to name a few. This is the first in the Netherlands. (More are planned for Maui, Delhi, Jaipur, and Costa Rica.) Upon entering the hotel, guests check in at the reception area, which is six stories high and features a constellation of stars on its ceiling, and are offered a free glass of wine to enjoy in the lounge. There are other complimentary perks too, including non-alcoholic beverages and locally produced snacks in the guest rooms (such as “Lovechock” chocolate and “Just Nuts” nuts).

Blue Spoon, the hotel’s restaurant, adopts a seasonal farm-to-table concept with chef Julien Piguet at the helm crafting Western European seaboard fare, and honey sourced from a beehive on the roof. Herbs are culled from his garden. From the Chef’s Table is a view of the open kitchen. Cocktails are served in a speakeasy-style lounge with signature drinks inspired by three different eras, including concoctions like One Minute Delft Blue and Lucky Librarian. There are 15 room types, a combination of rooms and suites that range in size from 258 to 1,500 square feet (easily among the largest suite sizes in Amsterdam). Each features a hand-painted sink basin from Wanders and a book-shaped desk as well as a walk-in closet.

Also in the hotel is a fitness center and spa. And, tapping into Amsterdam’s world-renowned status as a bicycling city, guests can rent bicycles to tool around on a self-guided tour. (There is even a bike-repair shop in the hotel, so no need to worry about faulty brakes or a flat tire.)

Kristine Hansen is a freelance writer based in the Heartland (Milwaukee, Wisconsin) where she reports on food, wine and travel topics around the globe for Fodors.com, along with new-hotel openings. She also writes for Wine Enthusiast, TIME, Whole Living and American Way. In 2006 she co-authored The Complete Idiot’s Guide to Coffee and Tea (Alpha Books/Penguin). You can follow her on Twitter @kristineahansen or through her web site.