News Apeksha Bhateja What Are the Chances You'll Get Monkeypox at a Hotel?
NewsAn Island-by-Island Guide to Caribbean Rum

An Island-by-Island Guide to Caribbean Rum 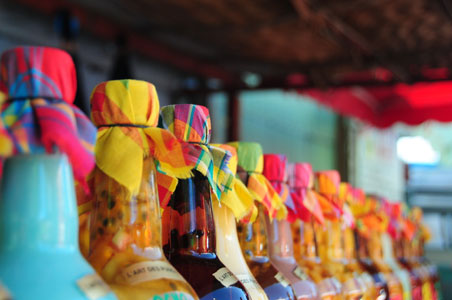 Call it rum, rhum, or ron; just don’t call it boring. Often (falsely) portrayed as uniformly saccharine, rum is one of the most diverse spirits on the planet. Today, in honor of National Rum Month (August) and the upcoming National Rum Day (August 16), we’re going straight to the source to get the full story. Next stop, the Caribbean islands.

Caribbean rums range from crisp, complex Martinican bottles and subtly sweet Bajan blends to the bold, whiskey-like Haitian distillations. How can one three-letter word encapsulate so many discrepancies? Due to unregulated production laws, anything distilled from sugar cane or its by-products can be classified as rum. Couple that with the broad range of Caribbean cultures, histories, and topographies, and you’ve got yourself a veritable rum rainbow.

Jamaica: One of the only islands to create an official classification system for its rum varieties, Jamaica’s bottles range from light and clear to dark and full-bodied. After distillation in clay pot sills, most Jamaican rums are blended and used in cocktails and seemingly ubiquitous punches. While Appleton is the country’s best-known export, island experts like the Tryall Club’s Jerome Dellon and Courtney Virgo champion local favorites like J. Wray & Nephew White Overpoof Rum, which has a smooth taste despite its 60+ proof.

Martinique: Arguably the foremost rum destination in the region, this French-Caribbean island produces only Appellation d’Origine Contrôlée (AOC) rums. Translation? Martinican rum standards are so high that the French government monitors its products using the same type of strict guidelines it has for Burgundy wine or Roquefort cheese. Distilled from pure sugarcane juice, Martinique’s rhums agricoles have a complex, almost vegetal quality, and range from the delicately spiced Saint James Royal Ambre to clear and crisp Clément Blanc.

Dominican Republic: For proof that all rums aren’t sweet, consider Dominican distiller Brugal. The 125-year-old label produces a range of light and dark rums, culminating in the distinctive Extra Dry. Something of a gin-drinker’s blend, this white Brugal is made from fermented molasses and aged for just three to five years in American oak casks once used for bourbon. The result is crisp, clear, and unlike any other rum from the region.

Barbados: Like Armagnac production, Bajan rums are distilled using both column and copper pot stills. The resulting blends range from light to dark, but al have a light, subtle sweetness. Barbados‘ best-known brand is Mount Gay, which dates back to 1663 and claims to be the world’s oldest operating rum producer. The blended bottles make for great company—Bajan rum enthusiasts use them in carefully guarded rum punch recipes or mixed with fresh coconut water for a simple, straightforward, delicious cocktail.

Guyana: The only Caribbean country that is not, in fact, an island, South America’s coastal Guyana is an outlier in more ways than one. Its rich, dark rums get their distinctive terroir from the Demerara River, where Guyanese sugarcane is picked before being crushed into molasses. Distilled in both pot and column stills, they can also be aged for remarkably long periods of time. Consider luxury brand El Dorado cask-aged, 21-year-old Special Reserve, which has a dark, honeyed taste, perfect for sipping straight.

Haiti: Made from pure sugarcane juice, Haitian rhums agricoles have a sharp, layered bite. National brand Barbancourt makes all five of its bottles using a French double distillation process called charentaise. Typically used for bottling cognacs, charentaise gives Haitian bottles a distinctive tang that makes them excellent for drinking neat or with a solitary ice cube. Care to sip with a conscience? As part of Haitian earthquake relief efforts, Barbancourt has created a foundation to house some 1200 displaced people. It continues to accept donations and distribute aid; find out more here.