An Insider’s Guide to Mardi Gras 2012 in New Orleans 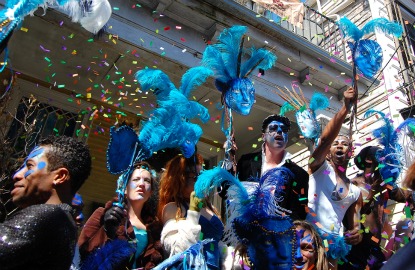 New Orleans is as ready as ever to laissez les bon temps rouler, or “let the good times roll,” and indulge in the annual bacchanal of Mardi Gras and its grand finale on Fat Tuesday, which falls on February 21 this year. Get out your bucket list: New Orleans’ Mardi Gras is something everyone should experience at least once. It is a marathon of joie de vivre, complete with live music, costumed revelers, and colorful parade floats tossing beads and trinkets into the crowds. Plus, since many of this year’s festivities fall over the President’s Day weekend, February 17-20, there’s added incentive to make the trip.

Though devotees would blanch at the suggestion, you can also experience the festivities in the two weeks leading up to Fat Tuesday: dozens of parades roll through the streets almost daily, and the city celebrates "Lundi Gras" on Monday, February 20, which includes a vibrant celebration along the riverfront. If you decide to stay on and brave Fat Tuesday, be forewarned: the French Quarter itself can get raucous, especially along Bourbon Street. You may find the atmosphere somewhat more civil and congenial on the streets leading into the French Quarter.

For information on events, including parade schedules, check out Mardi Gras New Orleans.

Rooms can be difficult to snag for Mardi Gras; many visitors make reservations months in advance, and hotels across the board raise their rates. But there are still some rooms available (we checked). The Ritz-Carlton New Orleans brings its signature elegant touches to a grand historic building adorned with colonnade fronting Canal Street. After partying through Mardi Gras, recover with a pampering treatment at the hotel’s renowned spa. The sleek Roosevelt Hotel New Orleans was completely redone a few years ago by the folks at Waldorf-Astoria, while the boutique International House wins raves for its modern style, and the Sheraton New Orleans is a more budget-minded choice, with a great location just steps from the nexus of the parades.

Many restaurants have limited service or even shut down completely for Mardi Gras and those that stay open are often packed at all hours; call ahead. The venerable Arnaud’s sets the standard for New Orleans cuisine and even has a Mardi Gras museum. Treme fans may want to stop in at Dooky Chase (2301 Orleans Avenue, 504/821-0600), a longtime creole and soul food favorite, while Brennan’s remains the most celebratory spot for a lavish brunch. Sample shrimp at Pascal’s Manale (1838 Napoleon Avenue, 504/895-4877), oysters at Casamento’s, muffuletta sandwich at Central Grocery (923 Decatur Street, 504-523-1620), and—of course—beignets and chicory coffee at Café Du Monde.

Get into the spirit of Mardi Gras by donning a mask or costume from Uptown Costume (4326 Magazine Street, 504-895-7969). For a backstage look at how the whole thing happens, swing by Mardi Gras World, in the shadow of the convention center and within sight of the Mississippi River, where you can see artisans fashioning the impressive parade floats as they have since 1947 (note that it’s closed on Fat Tuesday, when everyone will be at the big event).

For the most up-to-date restaurant, hotel, and shopping reviews, visit our comprehensive New Orleans Travel Guide.