Hotels & Lodging Amy Fallon Quiet Hours, Curfews, and *Chores*? Why the Tide May Be Turning Against Airbnb
NewsAmerica’s Strangest Hotels: 10 Weird and Wacky Places to Stay

Have you ever wanted to spend the night inside a giant wooden beagle or a lofty treehouse? Well here’s your chance. 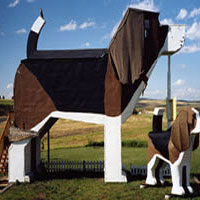 Dog Bark Park Inn. Calling all dog lovers! Now you can check into the world’s largest beagle bed & breakfast. Yes, the hotel is literally a two-story sized doghouse shaped like a beagle. And like every dog, the beagle has a name – Sweet Willy. Visitors enter into the “dog” via a second-story deck. The head of the dog serves as the loft guest room with a “cozy alcove in the muzzle”. Relieve yourself in the hydrant shaped restroom and pick up miniature beagle carvings made by artists Dennis and Frances from the gift store as souvenirs. www.dogbarkparkinn.com

Quaker Square Inn. Get a good night’s sleep in your very own circular room, one of 36 converted silos that once served as storage for the Quaker Oats Company. Built in the 1930s, the silos used to hold more than 1.5 million grain bushels and are now a popular lodging option for visitors to the small town of Akron, Ohio. www.quakersquareakron.com 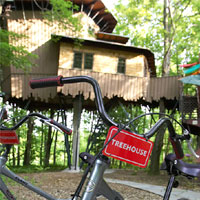 Winvian. Snuggle up into your very own Treehouse cottage 35ft up in a… tree, complete with Jacuzzi and wood-burning fireplaces (wait is that a good idea?). If you’re spending a couple nights, you could also switch over to its Golf cottage with a miniature golf course and green sloping floors right inside the cottage or maybe try out the Helicopter cottage with a full-sized Sikorsky Coast Guard chopper lodged inside the cottage. No joke. Check out the Winvian for more uniquely styled rooms. www.winvian.com

The Shady Dell. Ever wonder what it felt like to own your own trailer? Now you can live out those dreams at the Shady Dell which has 11 fully restored and themed vintage aluminum travel trailers, a yacht, and a bus. Bed down in the 1957 El Rey trailer with its Polynesian flair or the 1950 Spartanette with its vintage black and white television and its phonograph which holds 45 rpm records. www.theshadydell.com 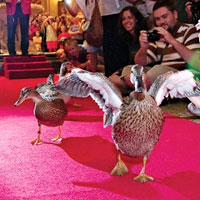 The Peabody. What makes the Peabody weird isn’t the presence of obscure furnishings or fanatical themed rooms. It isn’t even its “Duckmaster”…a concierge who wears a scarlet-and-gold-trimmed jacket and wields a brass-head duck cane.

It’s the presence of five ducks…mallards to be specific. Five mallards that waddle from the hotel’s fountain to its elevator and then back, across their very own red carpet twice a day. The ducks march through crowds…yes…crowds of onlookers to the tune of John Phillip Sousa’s King Cotton March. This ritual alone guaranteed the Peabody a spot on our weirdest hotels list. www.peabodymemphis.com

Burlington Hotel. Established in 1883, the Burlington Hotel is rumored to have been a popular bordello (brothel) back in the day. Why this rumor? The hotel’s owner at the time named all its antique-furnished rooms after women who he knew. Their names still appear on each room door. The hotel still keeps some of its original wallpaper, and other unique décor include antique dolls. 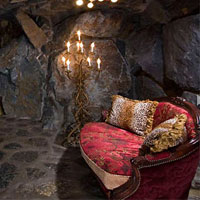 Madonna Inn. With over 110 uniquely-designed rooms, the inclusion of themes like its cave-like “Rock Room”, an underground cavern moves the Madonna Inn from fanatical to weird. The room’s décor instantly transports you to the Stone Age with its “rock basin” bathroom and sculptured waterfall shower. Other notables include its “Buffalo” room with (you guessed it) a stuffed and mounted buffalo head and the “Caveman” complete with animal prints and stone-age clubs. www.madonnainn.com

Jules Undersea Lodge. Go 20,000 leagues under the sea… or just dive 21 feet beneath the surface to check into your underwater room. Located under the mangrove habitat of Emerald Lagoon, visitors enter through an opening underneath the lodge, and 42-inch round windows allow you to observe your aquatic neighbors. You may want to learn how to scuba dive before booking a room. www.jul.com 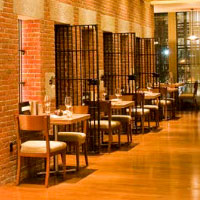 Liberty Hotel. There are many prisons-turned-hotels around the country, but what makes the Liberty Hotel (formerly the Charles Street Jail) unique is how it seamlessly incorporates existing jailhouse structures like iron bars and gates into its public spaces such as its CLINK restaurant and the “vestiges of jail cells” that exist within the lobby bar. www.libertyhotel.com

Kokopelli’s Cave Bed & Breakfast. Walk down a slanting path and rock-cut steps which take you 70 feet below the earth’s surface to Kokopelli’s cave and stay in a bedroom cave excavated out of 65-million year old sandstone. www.bbonline.com/nm/kokopelli/

Lola Akinmade is a writer and photographer who has written for many travel resources and received accolades for her work. She is also an editor with the Matador Network.