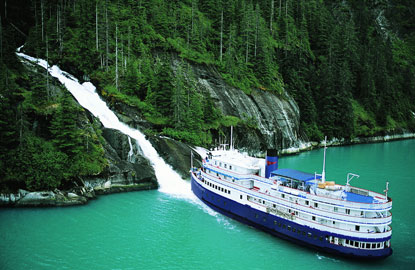 Unlike Royal Caribbean or Carnival, American Safari Cruises is not your typical cruise line. Not part of a massive corporation, it’s actually a small company owned by individuals who simply love yachting and small ship cruising (who doesn’t?). American Safari’s mission is to create unique itineraries and immersion experiences that resonate with travelers. The company is always crafting new and unusual experiences—whether that means an itinerary in Alaska, Mexico, or Hawaii, or sailing a unique yacht or small ship.

To that end, in August 2011, American Safari bought a ship called Spirit of ’98. The vessel had been in the Cruise West fleet and was without a home after that line had gone out of business. American Safari saw the potential in Spirit of ’98 because it’s actually a modern ship built to look like a Victorian coastal steamer.

American Safari has plans for significant upgrades and renovations before the vessel, renamed Safari Legacy, officially joins its fleet in August 2013. She’ll sail two 11-night voyages between Seattle and Juneau, Alaska, departing on August 11 and 22, 2013. After that, you’ll find Safari Legacy sailing weeklong itineraries on the Columbia and Snake Rivers (round-trip out of Portland, Oregon) in the fall and spring before returning to Alaska in the summer of 2014 for a season of weeklong cruises between Juneau and Ketchikan.

To differentiate Safari Legacy from American Safari’s other ships, its voyages will include an all-new "Heritage Adventure" program with onboard presentations and tours on land. Naturalists and guides will retrace history along the gold rush trail in Alaska or Lewis and Clark’s expedition in the Pacific Northwest.

Tim Jacox, executive vice president of sales and marketing, noted, "In both destinations, historical characters and stories come to life in unexpected ways. You may meet naturalist John Muir on the bow of the boat in Alaska or Meriwether Lewis along the river."

This focus is a nice counterpoint to American Safari’s existing ships, which concentrate on nature and wildlife. Safari Legacy will call on ports with historic significance and guided visits in town will include interactions with locals and historians.