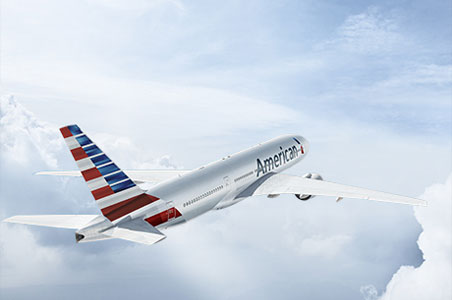 American Airlines announced a new branding effort today as it continues to try and emerge from bankruptcy as a reinvigorated and inspired airline. In an unveiling today at their headquarters as well as in an online marketing blitz the carrier showed off a new logo, aircraft livery design, and other brand components. The company says, "Our new logo & tail reflect the spirit of America: innovative, progressive & open to the world." CEO Tom Horton added, "Our new logo and the refreshed exterior of our planes represent more than a change of symbol, but a symbol of change in our path to modernize and innovate."

The new branding has been a very tightly guarded secret for several months now and leaked this morning on Twitter only about an hour prior to the official announcement. From that point the reactions were swift and vocal. Many like the new branding while others are not so convinced. The tail seems to be the most oft objected to component where such opinions were specified. Their twitter account has been quite active today as well, trying to inspire the doubters with comments such as, "Our new look symbolizes our passion for progress & the spirit that is uniquely American."

For the company the rebranding is a key step in their efforts to break away from the bankruptcy and the past. Whether this is a major step in that direction or just a stop-gap until a potential merger with US Airways is culminated remains to be seen. In the meantime, expect to hear plenty more opinions on this new look.

What’s your take? Beautiful or boring? Inspired or insipid? Let us know!