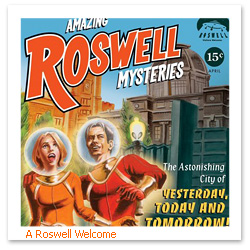 Want to go somewhere really unique this summer? Why not vacation in a place so special it’s attracted tourists from another galaxy? Here are a few of our favorite alien-approved locales around the world. Remember, you don’t have to believe in extraterrestrials to enjoy these places — most are just plain fun to visit. May the force be with you!

Roswell, New Mexico: In the summer of 1947 something strange fell from the sky just north of Roswell. In a now-infamous press release dated July 8, 1947, the U.S. government insisted it was a weather balloon. An alarming number of other people swear it was an alien space craft complete with several small green men. Whatever it was, the town owes much of its lively tourist industry to what’s now known as The Roswell Incident. This summer, Roswell is celebrating the 60th anniversary of the “incident” at its annual UFO Festival, July 5-8. The festival includes assorted random “abductions” of spectators, a carnival with UFO rides, a Crash-‘n’-Burn Spaceship Race, an alien parade, and a crop circle maze. While you’re in town, make sure to visit the International UFO Museum and Research Center (adults $5), which does a great job evoking those strange days in 1947.

The Extraterrestrial Highway, Nevada: Highway 375 in Nevada is officially designated “The Extraterrestrial Highway,” and it’s an essential road trip for any true alien enthusiast. The highway runs from Warm Springs, at U.S. 6, to Crystal Springs at Nevada State Route 318. Its official claim to fame is that it skirts the eastern edge of the Nellis Air Force Range, whose Nevada Test and Training Range is home to Area 51, the focus of many juicy alien-government cover-up theories.

You can’t visit Area 51 — signs near its Groom Lake location warn you that “Deadly Force is Authorized” to deal with trespassers — but you can see the big “Extraterrestrial Highway” sign just outside of Crystal Springs, and you know you want a picture of yourself grinning under it. The tiny town of Rachel (population 99), 40 miles from Crystal Springs, is home to the Little A-Le-Inn, a swell restaurant where you can eat “Alien Burgers” and purchase UFO-souvenirs. The Little A-Le-Inn’s 6th Annual UFO Friendship Campout is scheduled for May 26-27, 2007 and includes a steak BBQ, talks on UFO-related subjects, and a hopeful sky watch ’round the bonfire at night. 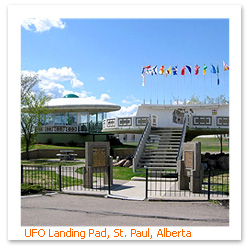 Wisconsin: In wonderfully wacky Wisconsin there are three different towns — Dundee, Elmwood and Bellville — that all claim to be our planet’s premiere alien hotspot. The entire state is apparently visited by UFOs on a regular basis, but according to the “Weird Wisconsin” website, Dundee has also been visited by leprechauns, angels, and a 45-foot lake monster. Billy Benson of Benson’s Hideaway, a swell little pub, throws a UFO Daze festival each year usually on the third weekend of July (920/533-8219). In Elmwood, the 29th annual UFO Days celebration happens July 27-29, and in Bellville the annual UFO event is scheduled for October 27. If you have to choose just one, go to Belleville, where the Halloween vibe really adds to the fun of the alien “glo ‘n’ bowl” games, the monster costume ball, and the chili cook-off. Dundee is for serious extraterrestrial enthusiasts while Elmwood’s event will appeal to less fervent UFO fans.

St. Paul, Alberta: Leave it to our friendly neighbors to the north to build a perky “Welcome To This Planet” landing pad for extraterrestrials. Located 125 miles northeast of Edmonton, on Highway 28, St. Paul’s 130-ton UFO landing pad features a map of Canada made of stones provided by each province. Provincial flags fly high above the pad, and a sign beside the structure rhapsodizes about how future travel in space will be safe for all “intergalactic beings.” A UFO tourist information booth, located next to the landing pad, boasts a spiffy UFO exhibit with photographs of odd flying crafts, crop circles, a display of famous hoaxes, and a UFO Hotline to report sightings and encounters.

Avebury, England: This small village in southern England is famous for its eerie stone circles. Nobody knows the meaning of the circles, though some believe the stones, like those at nearby Stonehenge, were erected as a navigational tool for extraterrestrials to find their way to earth. The main site consists of a wide circular ditch and bank, about 1,400 feet across and over half a mile around. The largest circle originally had 98 stones, but only 27 remain. 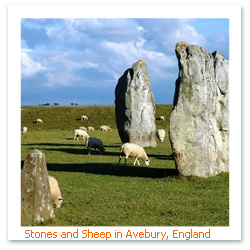 The Falkirk Triangle, Scotland: The roughly 50-mile area that encompasses Stirling, Fife, and the fringes of Edinburgh averages about 300 UFO sightings a year, causing the Scottish National Tourist board to dub it “the nearest thing there is to the Costa del Sol for aliens.” According to a study conducted by the tourist board, one in every 17,000 inhabitants in Scotland has spotted a UFO. The best bet for sightings is apparently the small town of Bonnybridge, 30 miles west of Edinburgh, where about half the 6,870 inhabitants say they’ve seen a UFO. Until the long-rumored-to-be-happening visitor center gets built in Bonnybridge, you won’t find much to do here, save talk to the locals and gaze longingly into the sky.

Cerrado, Central Brazil: Many folks believe that certain sectors of this grassland region are landing spots of choice for UFOs. A popular story in these parts tells of a bus left powerless for several minutes after being encircled by beams of colored light. In 1996, officials in the town of Barra do Garças, 420 miles northwest of Brasilia, on the Goiás-Mato Grosso border, designated 12 acres for the world’s first UFO “airport” — the Interspace Aerodome. It was never built, but the publicity it received fueled the notion that this region is a hotbed of UFO activity.

Varginhia, Brazil: The Brazilian army apparently captured an alien here. The alien was first spotted by three young women who described it as “short, dark, with some kind of sticky liquid all over the body, with three small horns on the head and one red eye.” The army denies that it snagged any aliens and said its van just happened to be in town that day to drop off a (human) corpse at a funeral home. Locals don’t believe the army. The town is now Brazil’s answer to Roswell, with spaceship-shaped bus stops and a water tower that features alien craft. 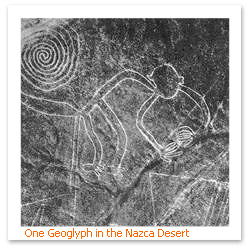 Nazca City: Hundreds of gigantic glyphs, most depicting animals and geometric shapes, swirl across the Nazca desert here. The designs, believed to be centuries old, were created by removing selected pebbles from the surface of the desert revealing the lighter earth underneath. The thing is that the glyphs are so big — some stretch for at least six miles — that the designs only make visual sense when viewed from the air. Which begs the question, How were they planned? Presumably the Nazca people weren’t able to fly, though it is curious that one of the images looks an awful lot like an alien or an astronaut waving hello or goodbye. (Cue the Twilight Zone theme music).

Roughly 290 miles from Lima, Nazca City is also home to other historical treasures, including an ancient solar observatory and a pre-Inca cemetery which, the Peruvian tourist board cheerfully asserts, features open tombs “in which you can appreciate the old inhabitants’ remains.” A three-day tour of Nazca and environs is hosted by Magical Cuzco Tours and is priced at $415 per person (based on double occupancy). The package includes transportation, hotels, breakfasts, and a private plane flight over the Nazca lines.