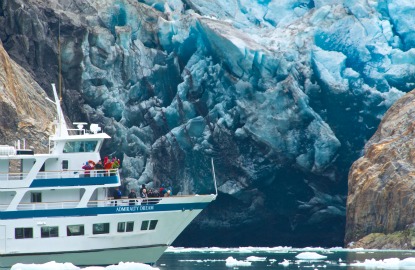 The hidden coves, calving glaciers, and remarkable wildlife of Alaska have secured its standing as the world’s third-largest cruise market (trailing only behind the Caribbean and Mediterranean), with the cruise calendar for 2012 shaping up to be the biggest and best yet.

Some 30 large cruise ships will be plying Alaskan waters this season, with Princess Cruises bringing a seventh ship to Alaska (the 2,670-passenger Sapphire Princess); Disney Cruise Line returning to the region for its second year (the 2,700-passenger Disney Wonder will change its homeport from Vancouver to Seattle in 2012); and Norwegian Cruise Line replacing the 2,348-passenger Norwegian Star with the higher-capacity, 2,376-passenger Norwegian Jewel.

But the big news is the bevy of new small-ship cruise line offerings in the Last Frontier, with intimate, adventure-minded lines cropping up to fill the void left by the 2010 collapse of Cruise West, which long dominated Alaska’s small-ship cruise market.

One of the new kids on the Alaskan block, Alaskan Dream Cruises, which debuted on the scene in 2011 and is owned by an Alaskan family with Native Tlingit roots, is ramping up its offerings in 2012 with a trio of new itineraries, new ports of call, and ship renovations. The soon-to-debut itineraries will take in lesser-known locales of the Inside Passage, including an 7-night adventure from Sitka to Ketchikan that incorporates Hobart Bay (primed for kayaking) and Kasaan (the site of the only remaining Haida clan house in Alaska), as well as lengthier and more expansive 10- and 12-night itineraries with extra stops like Colt Island (exclusively accessed by Alaskan Dream guests). Also, look for new port calls for the cruise line in Ketchikan, Skagway, Haines, Thorne Bay, Wrangell, and Gustavus.

Details: Sail the new 7- to 12-night itineraries on the just-renovated, 42-passenger Alaskan Dream or 66-passenger Admiralty Dream from May to September. Rates start from $2,269 per person.

Details: Sail 7-night cruises on the Wilderness Explorer (May to August; from $3,095 per person) or Safari Endeavour (from May to September; rates from $4,795).

Small-ship, port-centric American Cruise Lines is set to debut new 7- to 11-night Alaskan Inside Passage itineraries come June, operating round-trip from Juneau or between Juneau and Seattle. The line is one of only a few cruise companies that has been granted a contract to operate tours in the protected waters of Glacier Bay National Park, and will be privy to onboard, enrichment-minded visits from park rangers.

Details: Sail 7- to 11-night cruises on the 100-passenger American Spirit from June to August. Rates start from $5,320 per person.

Expedition cruise line Lindblad Expeditions is celebrating 30 years of Alaska exploration with its new Undersea Alaska Program, which will offer guests a rare glimpse of the marine wildlife-rich wonderland lingering just beneath the ship’s hull. In partnership with National Geographic, Lindblad’s Alaska sailings will add an undersea specialist to its team of naturalists, historians, and National Geographic experts, who will dive to depths of 40 to 80 feet below the ocean’s surface to film underwater footage on a special HD camera (here’s a sample video to check out). The exclusive footage, shown in conjunction with hydrophone audio recordings, will be shared with guests two times per sailing during special onboard presentations in the ship’s lounge.

Are you planning a trip on one of these cruise lines? Share your thoughts with us in the comments section below.