Planning an Alaskan Cruise: Answers to the 5 Most Common Questions 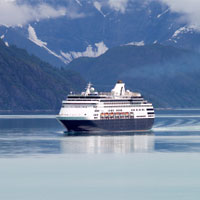 Don’t let the apparent simplicity of cruising—ie, getting on a boat and disembarking a week later—fool you. There are lots of decisions to be made before you go! To choose the right cruise for your needs, you need to find the perfect intersection of three variables: itinerary, cruise line, and cruise ship.

There are lots of questions to be asked. Luckily we’ve got answers. Here’s how to make sense of the top five most-asked questions about Alaskan cruises.

Visit our Cruise Reviews section to learn more about the various cruise lines and cruise ships.

Where Can I Go?

Cruise ships typically follow one of two itineraries in Alaska: round-trip Inside Passage loops and one-way Inside Passage–Gulf of Alaska cruises. Itineraries are usually seven days, though some lines offer longer trips. The most popular Alaskan ports of call are Haines, Juneau, Skagway, Ketchikan, and Sitka. Lesser-known ports in British Columbia, such as Victoria and the charming fishing port of Prince Rupert, have begun to see more cruise traffic.

Small ships typically sail within Alaska, setting sail from Juneau or other Alaskan ports, stopping at the popular ports as well as smaller, less visited villages. Some expedition vessels focus on remote beaches and fjords, with few, if any, port calls.

A seven-day cruise typically starts and finishes in Vancouver, British Columbia, or Seattle, Washington. The first and last days are spent at sea, traveling to and from Alaska along the mountainous coast of British Columbia. Once in Alaska, most ships call at a different port on each of four days, and reserve one day for cruising in or near Glacier Bay National Park or another glacier-rich fjord.

One-Way Inside Passage–Gulf of Alaska Itineraries

These cruises depart from Vancouver, Seattle or, occasionally, San Francisco or Los Angeles, and finish at Seward or Whittier, the seaports for Anchorage (or vice versa). They’re a good choice if you want to explore Alaska by land, either before or after your cruise. For this itinerary, you’ll need to fly into and out of different cities (into Vancouver and out of Anchorage, for example), which can be pricier than round-trip airfare to and from the same city.

Most small ships and yachts home port in Juneau or other Alaskan ports and offer a variety of one-way and round-trip cruises entirely within Alaska. A typical small-ship cruise is a seven-day, one-way or roundtrip from Juneau, stopping at several Inside Passage ports—including smaller ports skipped by large cruise ships.

Alaska’s small cruise ships and yachts are based in Juneau throughout the summer. In September they sail back to their winter homes in the Pacific Northwest; in May they return to Alaska via the Inside Passage. These trips are usually about 11 days and are often heavily discounted, because they take place during the shoulder season.

Although mainstream lines stick to the popular seven-day Alaskan itineraries, some smaller excursion lines add more exotic options. Cruise West, for example, offers voyages across the Bering Sea to Japan and Asia. You can also create your own itinerary by taking an Alaska Marine Highway System ferry to ports of your choosing.

The cruise-ship season is over by October, but for independent, off-season ferry travel November is the best month. After the stormy month of October, it’s still relatively warm on the Inside Passage (temperatures will average about 40°F), and it’s a good month for wildlife-watching. In particular, humpback whales are abundant off Sitka, and bald eagles congregate by the thousands near Haines.

Most cruise lines offer the option of independent, hosted, or fully escorted land tours before or after your cruise. Independent tours give you a preplanned itinerary with confirmed hotel and transportation arrangements, but you’re free to follow your interests in each town. Hosted tours are similar, but tour-company representatives are available along the route for assistance. On fully escorted tours you travel with a group, led by a tour director. Activities are preplanned (and typically prepaid), so you have a good idea of how much your trip will cost (not counting incidentals) before departure. Most lines offer cruise tour itineraries that include a ride aboard the Alaska Railroad.

In addition to rail trips to Denali, Holland America offers tours into the Yukon, as well as river cruises on the Yukon River. Princess’s cruise tours include trips to the Yukon and the Kenai Peninsula. Both lines offer land excursions across the Arctic Circle to Prudhoe Bay. Several cruise lines also offer pre- and post-cruise tours of the Canadian Rockies. Of the traditional cruise-ship fleets, only Norwegian Cruise Line does not currently offer cruise tour packages in Alaska. Many cruise lines also offer pre- or post-cruise hotel and sightseeing packages in Vancouver, Seattle, or Anchorage lasting one to three days.

Independent travel by rental car or RV before or after a cruise is another option. Passengers generally begin or end their cruise in Anchorage, the most practical port city to use as a base for exploring Alaska. Almost any type of car or recreational vehicle can be rented here.

When Should I Go?

Cruise season runs from mid-May to late September. The most popular sailing dates are from late June through August, when warm days are apt to be most plentiful. In spring, wildflowers are abundant, and you’ll likely see more wildlife along the shore because the animals haven’t yet migrated to higher elevations. May and June are traditionally drier than July and August. Alaska’s early fall brings the splendor of autumn hues and the first snowfalls in the mountains. Animals return to low ground, and shorter days bring the possibility of seeing the northern lights.

Daytime temperatures in May, June, and September are in the 50s and 60s. July and August averages are in the 60s and 70s, with occasional days in the 80s. Cruising in the low and shoulder seasons provides other advantages besides discounted fares: availability of ships and particular cabins is greater, and ports are almost completely free of tourists.

How Much Will It Cost?

Average fares for Alaskan itineraries vary dramatically depending on when you sail, which ship and grade of cabin you choose, and when you book. Published rates are highest during July and August; you’ll pay less, and have more space on ship and ashore, if you sail in May, June, or September.

Whenever you choose to sail, remember that the brochure price is the highest fare the line can charge for a given cruise. Most lines offer early booking discounts. Although these vary tremendously, many lines will offer at least 10% off if you book several months ahead of time, usually by the end of January for a summer cruise; this may require early payment as well. Sometimes you can book a discounted last-minute cruise if the ship hasn’t filled all its cabins, but you won’t get your pick of ships, cabins, or sailing dates. However, since most cruise lines will, if asked, refund the difference in fare if it drops after you’ve paid your deposit and before you make your final payment, there’s little advantage in last-minute booking. Some other deals to watch for are “kids sail free” deals, where children under 12 sail free in the same cabin as their parents; free upgrades rather than discounts; or special deals for home port residents. Frequent cruisers also get discounts from their preferred cruise lines.

Single cabins for solo travelers are nonexistent on most ships; taking a double cabin can cost as much as twice the advertised per-person rates (which are based on two people sharing a room). Some cruise lines will find roommates of the same sex for singles so that each can travel at the regular per-person rate.

Cruise fares typically include accommodation, onboard meals and snacks, and most onboard activities. Not normally included are airfare, shore excursions, tips, soft drinks, alcoholic drinks, or spa treatments. Port fees, fuel surcharges, and sales taxes are generally added to your fare at booking.

Large cruise lines account for the majority of passengers sailing to Alaska. These typically have large cruise ships in their fleets with plentiful deck space and, often, a promenade deck that allows you to stroll the ship’s perimeter. In the newest vessels, traditional meets trendy with resort-style innovations; however, they still feature cruise-ship classics, like afternoon tea and complimentary room service. The smallest cruise ships carry as few as 400 passengers, while the biggest can accommodate between 1,500 and 3,000 passengers—enough people to outnumber the residents of many Alaskan port towns. Large ships are a good choice if you’re looking for nonstop activity and lots of options; they’re especially appealing for groups and families with older kids. If you prefer a gentler pace and a chance to get to know your shipmates, try a smaller ship.

Compact expedition-type vessels bring you right up to the shoreline to skirt the face of a glacier and pull through narrow channels where big ships don’t fit. These cruises focus on Alaska, and you’ll see more wildlife and call into smaller ports, as well as some of the better-known towns. Talks—conducted by naturalists, native Alaskans, and other experts in the state’s natural history and native cultures—are the norm.

Cabins on expedition ships can be tiny, usually with no phone or TV, and bathrooms are often no bigger than cubbyholes. The dining room and lounge are usually the only public areas on these vessels; however, some are luxurious with cushy cabins, comfy lounges and libraries, and hot tubs. You won’t find much nightlife aboard, but what you trade for space and onboard diversions is a unique and unforgettable glimpse of Alaska.

Many small ships are based in Juneau or another Alaska port and sail entirely within Alaska. Twice annually, some offer an Inside Passage cruise as the ships reposition to and from their winter homes elsewhere.

Small-ship cruising can be pricey, as fares tend to be inclusive (except for airfare), with few onboard charges, and, given the size of ship and style of cruise, fewer opportunities to spend on board.

What Should I Bring?

Visit our Cruise Reviews section to learn more about the various cruise lines and cruise ships.