News Amy Fallon With Violence Continuing There, Should We #VisitUganda?
Home  >  News   >   Airports We Love (and Hate)

Airports We Love (and Hate) 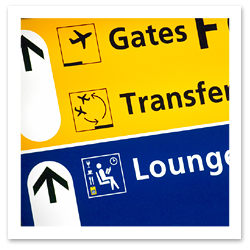 Airports don’t have to be purgatory pits where you wile away eternity wandering through long white halls eating soggy Styrofoam snacks. Here are a few airports where a layover might actually be pleasurable.

Amsterdam
You have to love an airport that boasts about its “surprising toilets.” Amsterdam Schiphol’s loos feature cheery murals and other artistic touches including several amusing targets for the gentleman. Passengers can visit the airport branch of the city’s famed Rijksmuseum, test their luck in the casino, and experience a typical “brown bar” at the Amsterdam Café before they avail themselves of one of the many cozy “snooze chairs” scattered throughout the airport.

Cincinnati
It’s worth traveling to Cincinnati-Northern Kentucky International Airport just to see the art collection. The huge mosaics of laborers were originally created by Winold Reiss for the Cincinnati Union Railway Station during the Great Depression and were moved to the airport in 1974. The murals are widely heralded as outstanding examples of art deco portraiture.

Hong Kong
Hong Kong International Airport has a traditional Chinese pharmacy, bakery, tea shops, and an upscale mall with all the usual high-fashion options, including Prada. Shop till you drop and then take advantage of the free reflexology foot massages offered near Gate 40. Showers, comfy beds, internet access, and even more massaging are all available at the Transit lounge for about U.S. $33 for a two-hour package.

Honolulu
Visitors to Honolulu International, Oahu’s main airport, can also relax in the facility’s beautiful Japanese gardens, complete with a pond filled with fat frisky koi fish while listening to island-style music, before, between, and after their flights. Much of the airport is also open air. Granted, much of the airport could use an overhaul — it looks worn and tired — but it doesn’t seem to matter when you’re wrapped in tropical breezes.

Munich
A favorite with the younger jet set, Kinderland, in the Munich Airport Center, offers a climbing tower, stacks of giant Legos, video games, and a children’s cinema. Adult amusements are stodgier, including a visitor’s terrace with “an incomparable view of the new Terminal 2 apron, the aircraft handling area and the runways.”

San Francisco
San Francisco International airport offers plenty of ways to pass some time. Travelers can visit the aquarium or rent a portable DVD player. Little ones can blow off steam pre-flight on the Plasma Wall, “which shoots arcs of energized color when activated by sound.” The international terminal offers great sushi and a meditation room, the Aviation Library and Museum has changing exhibits on commercial aviation from vintage airplanes to fantasy space travel.

Singapore
If the showers, massages, private Jacuzzis, manicures and facials at Singapore’s Changi Airport aren’t enough to soothe your travel-weary bodies, you can always watch a movie in the airport’s theater, have a swim in the Balinese-themed rooftop pool, or nod off in the airport’s Transit Hotel (far nicer than it sounds). Those who have at least five hours to spare can register for one of the free two-hour sightseeing tours of Singapore.

South Korea
Incheon Airport is a geek wonderland. There’s an outstanding computer game room stocked with all the latest kiosks, and an internet lounge with free high-speed internet access, computer terminals, and plenty of coffee. Those who would rather play real-life games are in luck — the airport has an in-house billiard room and a nearby 72-hole golf range.

On the opposite end of the spectrum are a few airports we hate:

Charles de Gaulle, Paris
Dim, damp, and dirty. You’ll get no help from surly staff as you try to navigate the loops within loops that comprise the airport. Signs are either confusing or cleverly hidden. Make your way to where you thought you were supposed to be and you’ll realize you’re not as close as you’d hoped. Bathrooms are nasty.

Heathrow, London
Obviously designed by a sadist who gets his jollies from watching tourists run frantically around a huge labyrinth. Much like Paris’ Charles de Gaulle, as soon as you think you’ve figured out where you’re going, you’ll get stuffed into a broken down bus and bounced to another terminal, where you can start the entire process again.

LaGuardia and JFK, New York
Pitiful. The only fix for these monstrosities is to rip them down and rebuild from scratch. The terminals are dark and grim, traffic is always backed up, and the food venues are below fast-food standards. Staffers want to help the whimpering hordes that pass through, but are usually clueless.

Moscow Sheremetyevo, Russia
Deeply creepy, and smelly too. Travelers slump sadly against filthy walls because there aren’t enough seats, and alarming-looking locals cruise the crowds like sharks sizing up a school of fish. Food is inedible. It’s rumored that efforts are underway to increase airport efficiency. It certainly can’t get worse.

Mumbai International, Mumbai, India
Loud, confusing, and filthy. The packs of tip-demanding locals are growing by the day. Everyone from toilet cleaners to customs officials seem to be on your personal payroll. Baggage retrieval is chaotic. To make things even more interesting, the terminal is frequently infested by mosquitoes.