If you're flying in to Denver International Airport, you might have some questions about the colossal, demon-eyed horse statue staring into your very soul as you make your descent. Here are some answers.

Denver International Airport is a profoundly cursed airport built in 1995 to the tune of $4.8 billion (that’s ‘billion’ with a ‘b’—‘b’ for ‘but how in the blue hell did it go $2 billion over budget and where did all that money go, and also ‘b’ as in ‘beats me, you ask a lot of questions’). Since its creation, it’s gained a reputation among flyers as the air travel equivalent of a blood-soaked Precious Moments figurine. Atlanta’s airport is busy and Chicago’s is messy and New York’s is fragrant, but Denver’s airport is a truly singular nightmare vision, from the ghoulish murals to the rumors of secret subterranean catacombs deep beneath it. The airport has become the locus of several elaborate conspiracy theories, from lizard people to freemasonry. The airport even participates in its own cult status. It has installed talking gargoyles, helpful infographics about the necessity of renovating the lizard people’s lair, and an Illuminati Shake at the airport’s branch of Little Man Ice Cream (it’s made of vanilla ice cream, absinthe, and maraschino liqueur, for the record.)

But in this cornucopia of madness, one equine shape towers above the rest, and the world knows it by the name Blucifer. Blucifer is a 32-foot-tall, four-and-a-half-ton statue of a blue mustang with flaming coal-red eyes and an expression straight out of a Hieronymous Bosch painting. This cobalt abomination is the first thing flyers see while making their descent into Denver, and it sets the tone beautifully:

“Welcome to Denver. Here is Satan’s horse. Why is he here? Why is anything here? Enjoy the airport snack shop and try to ignore how veiny this horse is.”

Blucifer’s Christian name is technically Blue Mustang, a name used by precisely nobody, and certainly not by the artist who built and named it. Luis Jiménez, the sculptor and artist who designed and created Blucifer, was tragically killed in 2006 after an enormous section of the sculpture fell and crushed his leg, severing an artery. Jiménez’s sons completed work on the murderous statue and, in 2008, Blue Mustang was finally erected outside the airport to greet travelers with an apocalyptic vision of getting trampled to death by the scariest boy in hell’s stable. It was promptly nicknamed Blucifer by locals, all of whom were correct.

When one thinks of Denver, one thinks of omelets, Denver comma John, and our hardy pioneer forefathers–and the commissioning of Blucifer was meant to commemorate America’s westward ambition and free-roaming spirit and weird obsession with horses. Jiménez wanted to appeal to the public’s sense of adventure and was inspired by a legend from Southern Colorado’s San Luis Valley of a mythical blue mustang who was really good at finding food and grass and ran so fast that it could practically fly. (“A five-ton killer horse with the power of flight” is the correct answer to the question “what animal would a cruel, omnipotent toddler create to eat his parents for not buying him the right light-up shoes.”) The eyes that burn in the night and follow you as you fly in and out of Denver are fire-engine red neon, in tribute to Jiménez’s father, who owned a neon sign workshop. 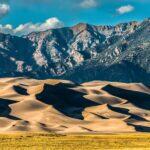 RELATED STORY
What Is Even Happening in This Strange Corner of Colorado?

We need to count our blessings that it’s Blucifer’s eyes that feature the use of the screaming red neon. I cannot adequately describe the vascular, Lovecraftian nightmare that is Blucifer’s unholy undercarriage.

You might be thinking to yourself, “I bet I know what a mustang’s bait and tackle probably look like,” or “I live in a universe that wants good things for me,” but you are wrong. Blucifer’s horse-danglies are a crime unto God and unto man, and it’s better that you hear it here first.

You’re going to Google it, and you’re going to find something that will upset you, and I’m sorry that I can’t protect you from this. Why are the veins like that? Does it need to be so much? I don’t know which is worse: seeing the body politic of Blucifer’s infernal construction close-up, or witnessing that pair of glowing eyes in the distance, piercing the dark with their otherworldly malice. There is no comfortable place from which to view Blucifer.

Denverites have grown to love Blucifer as a local mascot in much the same way that Philadelphians have embraced the bug-eyed existential menace of Gritty (well, prior to the assault): They’ve taken the towering demon into their heart as a native son of the city. No matter how many petitions have popped up online to have it removed, no matter how many travelers yell “somebody please make pants big enough to hide that,” all indications point to Blucifer’s permanent residence in the heart of Denver. Not least because the process of trying to remove him sounds like rehoming Moby Dick.