Coronavirus David Silverberg Are Your Kids Heading Back to Summer Camp? Here's What You Need to Know
Home  >  News   >   Airbnb for Luxury Seekers: OneFineStay 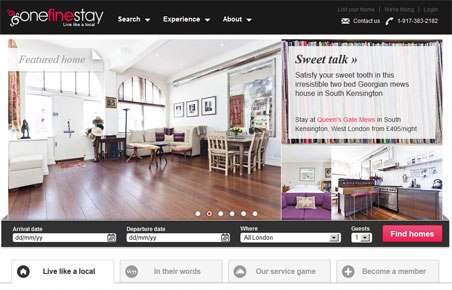 Imagine staying at an old friend’s house in a new city. You’d walk into their home and be more than just a guest—and much more than a tourist. For an increasing number of travelers, onefinestay offers the chance to sleep in a beautiful local home instead of being confined to a hotel room.

The founding of the luxury, short-term rental service "was a lightbulb moment," says Evan Frank, onefinestay’s co-founder and New York general manager. CEO Greg Marsh was working in London, observing crowded hotels next to upscale homes that appeared to be empty. "And he thought, why isn’t short-term house rental as easily facilitated as getting a hotel room?" Frank recounts.

Onefinestay welcomed its first guest to a self-proclaimed "unhotel" in London in May 2010, and proceeded to build up its bank of homes in the area. Understandably, early home renters had questions about exactly how guests would be vetted and managed. "This is handing over the keys to the kingdom," says Frank. "There is so much trust involved."

Once rented, each onefinestay home is prepared for guests with fresh linens, and toiletries. Then, at the conclusion of each stay, a cleaning crew rights the home to its original condition.

As an added guest amenity, onefinestay offers a hotel-quality concierge service—from nanny coordination to transportation assistance—that is included in the price of a stay. The service also pre-loads complimentary iPhones with insider, local recommendations—garnered from the homeowners themselves—about restaurants, transportation, and activities in the area. "It’s living like a local," says Frank, who describes guests as "upscale or boutique hotel customers looking for more living space and a unique neighborhood experience."

When the company expanded to New York City in 2012, Leslie Barnett of Brooklyn’s Park Slope neighborhood was quick to become a member. "They found us," she says. "They had walked around the neighborhood. We have an unusual-looking brownstone, so they sent us an invite." Leslie explains that the invitation coincided with her own musings about renting her home as an extra source of income, though she had previously been plagued by doubts about security.

It was onefinestay’s dedication to service that dispelled all doubts during a guest’s December stay in her home. "Every employee is so professional, so put-together—they are all in the right industry," says Barnett.

The New York business is expanding even faster than it had in London, with 150 hosts (homes range from around $200 to $2,000 per night) established in Manhattan and Brooklyn since the 2012 launch. London’s offerings have also grown to include 850 homes for rent. Frank says that they hope to expand to at least one new city in 2013, so keep a look out for even more upscale alternate lodging from onefinestay in the future.