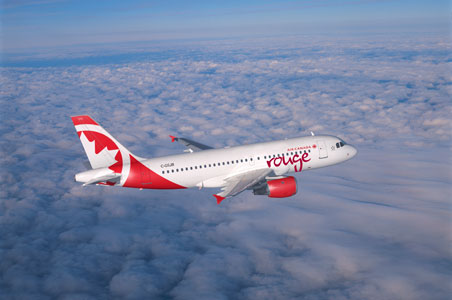 Air Canada is launching a new discount carrier, Rouge, with operations beginning in July 2013. The carrier hopes to capitalize on demand for leisure market travel while keeping costs (both for themselves and passengers) low enough to compete with Air Transat, Westjet, and others in those markets.

Additional service will be offered from Montreal to Athens. With only four planes—two 767s for long-haul and two A319s for short-haul—most of the destinations will not be served daily.

The service to Athens is somewhat intriguing as it represents a significant addition in capacity into a market which has seen massive cuts in recent years. It also comes as multiple other carriers have indicated they will be adding service between Athens and North America. Qatar Airways aims to add service to New York City and SkyGreece is reported launching in 2013 and has included Montreal and Toronto on their proposed route map.

Like most discount carriers the in-flight service will be heavily weighted towards paid amenities. Snacks, meals, and drinks will come with a price tag on flights to Sun destinations. Meals will be free to the European destinations but alcoholic beverages will cost extra. And the premium cabin experience will be rather less premium than the flat-beds and premium catering Air Canada offers in its ExecutiveFirst business class product. The in-flight entertainment system will come in the form of streaming media, saving the carrier costs in installing TVs at passenger seats. The pricing for streaming media has not yet been released.

The Rouge operations will also see limited participation in the Aeroplan and Altitude loyalty programs. This mostly translates into reduced points earning when flying on most routes operated by Rouge. Then again, if the ticket savings are reasonable enough the reduced points situation doesn’t matter so much.