Just Back From: Barbizon 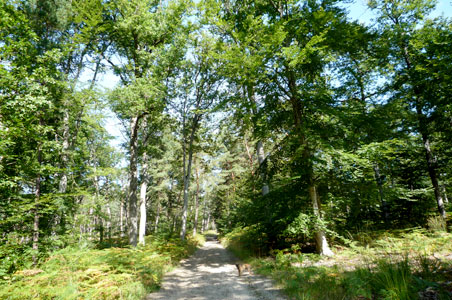 After a fairly gray summer, much of September and October were lovely and balmy. So Monsieur and I decided to take advantage by skipping off to our favorite sanctuary from the city: the charming village of Barbizon, just 30 miles away.

For such a tiny place, Barbizon has a pretty impressive reputation, being the birthplace of the aptly named Barbizon school of painters, which, in the mid-19th Century, championed rural realism during the romantic art movement. The likes of Corot, Monet, and Renoir painted there and Millet and Rousseau both lived and died there. Millet’s atelier remains much as it was in his day while the Museum of the Barbizon School of Art is located in Rousseau’s old maison.

But all that art isn’t the draw for Monsieur and me. Instead, we head there for the same reason that those painters flocked to Barbizon in the first place; the adjacent forest of Fontainebleau. A 12th century royal hunting ground and part of Chateau Fontainebleau’s estate, the forest is 100 square miles of gorgeous oak and pine, criss-crossed with walking trails and bridle paths that are dappled in daylight when the sun breaks through. Between the magical lighting and the huge and gray elephantine boulders that dot its wooded landscape, Fontainebleau is a natural mecca for nature-lovers, whether they’re toting an easel or not.

And our border terrier, Archie, thinks its paradise. 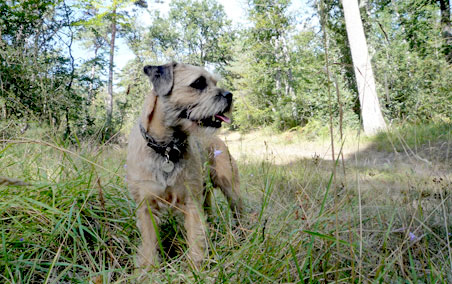 A menagerie of forest creatures concur with Archie’s appraisal, including wild boar, which tend to stay hidden in the thick bush when people are around. So who knew that one of these beasts was a mere few feet away when Monsieur and I ventured off track to pick mushrooms one day. (Ceps, also known as porcini, are abundant in Fontainebleau this time of year.) Who knew? Archie, knew, that’s who. Before we realized it, Monsieur and I found ourselves helplessly trying to catch our dog who thought chasing a wild boar through the woods seemed like a good idea.

If you’ve ever chased a dog, let alone a dog that’s determined to catch a big, and remarkably swift, black hairy pig, you’ll know that capture is unlikely. I therefore decided to wait where we initially lost sight of them, while Monsieur vainly tried to follow their trail. An excruciating half hour later (during which I tried hard not think about what the boar’s tusks would do to our nutty pup if he actually succeeded and got too near) Archie came back to where I was waiting, exhausted but unscarred. Monsieur, meanwhile, was miles away. Thank heavens for cell-phones and good reception. 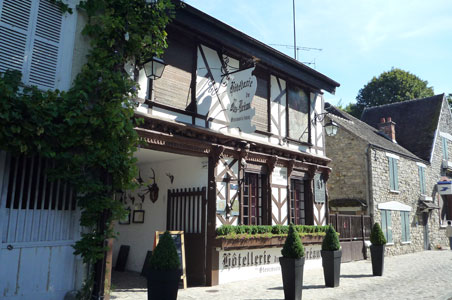 And thank heavens for Le Bas Br&eacuteau back in Barbizon, where Monsieur and I lunched and recovered from Archie’s adventure. Steeped in cultural history, most notably for having lodged Robert Louis Stevenson while he wrote Treasure Island, Le Bas Bréau is a delightful hotel with a wonderful Michelin starred restaurant, a less formal bistro, and a lovely alfresco dining area when the weather permits. The sculpture garden is worth a peek too. 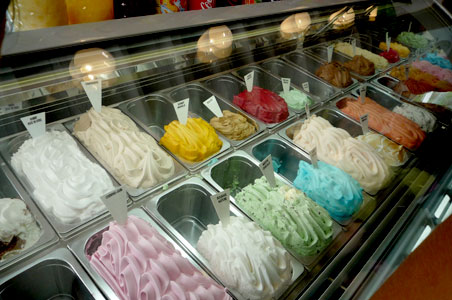 Barbizon’s adorably dinky main street (called Le Grand Rue, go figure…) often gives way to courtyards and large unseen gardens which are worth exploring when you’re not being tempted inside the many small art galleries, and antique and deco shops. My personal favourite is La Galerie des Gourmandises; an ice cream shop that’s like Baskin & Robbins on acid. No matter where we’ve dined in town, we always take dessert here—I usually have a double scoop of violet and bubblegum flavors.

As for other places to eat, Le Royal is the local dive, where low-key residents seem to hang out, watch sports on TV, and enjoy a surprisingly decent lunch for not much money. More upmarket while remaining casual and charming is L’Ermitage Saint Antoine. The food is terrific, and come to think of it, last time we ate there, I ordered the wild boar. Archie most certainly would have approved.