Coronavirus David Silverberg Are Your Kids Heading Back to Summer Camp? Here's What You Need to Know
Home  >  News   >   5 High-Octane Adventures in New Zealand

The half-crazed Kiwi culture of high-octane adventure sees it epic epicenter in Queenstown, the quintessential "adventure capital of the world." Thrill-seekers flock to this small South Island enclave for its dizzying array of amped-up adrenaline activities, doled out amidst the majestic scenery of New Zealand’s Southern Alps on the shores of glacier-fed Lake Wakatipu—it’s Mother Nature’s ultimate adventure playground.

This pioneering adventure tourism town is where the world’s first commercial bungee jump site was unveiled, alongside other world-first activities like tandem paragliding and commercial jet boating. Whether you have a need for speed, are looking to get airborne, or are intent on bending the laws of physics, visitors today can choose from some 150 activities that run the gamut from skydiving to luging to whitewater rafting, and beyond. Freshly back from my own heart-pumping adventure there, herewith the rundown on five of Queenstown’s most unforgettable high-octane activities. 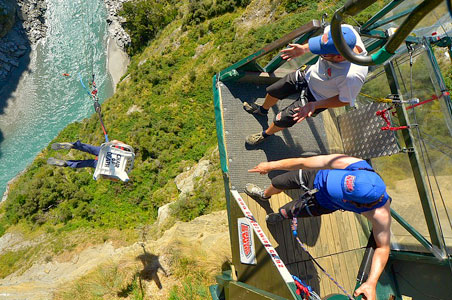 Tarzan meets stuntman at the Shotover Canyon Swing, a nail-bitingly exhilarating drop into the cavernous depths of scenic Shotover Canyon. Encompassing a 200-foot vertical free fall, immediately followed up by a giant pendulum swing that reaches speeds of up to 93mph, "the world’s highest cliff jump" is, by far, the craziest thing I’ve done to date. With more than 70 solo or tandem jump styles to choose from, dishing out varying degrees of adrenaline, my favorite jump was the "Chair of Death," in which I essentially flipped into a backwards somersault off the ledge of a 360-foot-high cliff-mounted platform, all while harnessed into a lawn chair. If that’s not enough to get the heart pumping, the outfit employs professional jump "assistants" to harness you in safely while stirring the psychological fear factor ($169/person; $33/second jump). 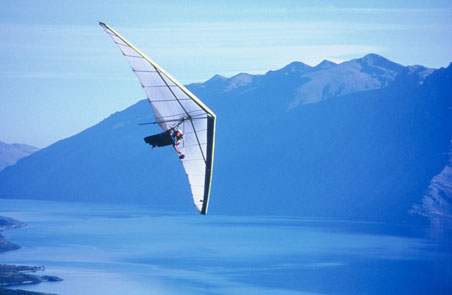 Spread your wings (borrowed as they may be) and soar for a bird’s-eye perspective over Queenstown, thanks to the adventures on offer from local outfitter Skytrek Tandem Hang Gliding & Paragliding. After being shuttled out to the prime hang gliding and paragliding perches of Coronet Peak (the highest commercial takeoff area in the southern hemisphere), follow the lead of your professional pilot as you run down a slope off a 3,800-foot-high mountain peak, pick up wind, and ultimately take flight. Tandem hang gliding delivers the ultimate thrills: For 10 to 20 unforgettable minutes, swoop and dive your way to the valley floor below, gliding at speeds of up to 50mph—for a small fee, you can even have a go at doing some of the maneuvering yourself (hang gliding costs $178/person). 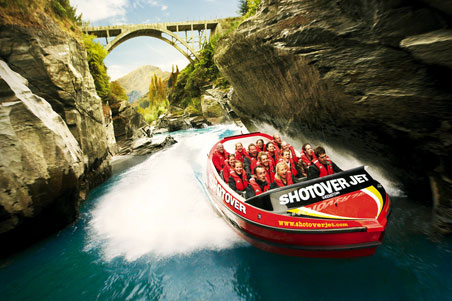 Thrilling more than 3 million passengers since its launch in 1970, Shotover Jet‘s red jet boats zip through the Shotover River Canyons at breakneck speeds. One of Queenstown’s original adventure activities, the whitewater rides accelerate through narrow canyon walls on just inches of water (be prepared to get wet), skirting rocky outcrops and mammoth boulders, all while reaching speeds of up to 53mph. The kicker? Tailspin into high-velocity 360-degree rotations for guaranteed shrieks. The scenery is downright dramatic—despite traveling at a momentous pace that make it all seem rather blurred ($109/adults, $59/kids). 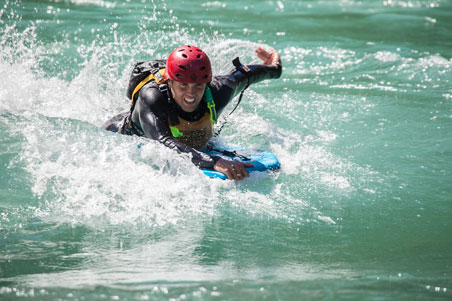 Queenstown pioneered the commercial river surfing concept, which launched in the late ’80s as the brainchild of a displaced Hawaiian surfer looking to get his local fix. The guide-led Serious Fun River Surfingexcursions on the pristine Kawarau River allow travelers to "surf" fast-flowing rapids on one of two sections of the river (the Chinese Dog Leg—billed as New Zealand’s longest commercial rapid—or the Roaring Meg). Kick off your trip with some basic bodyboard training, and work your way up to adrenaline-pumping barrel rolls and rock jumps in no time ($160/person). 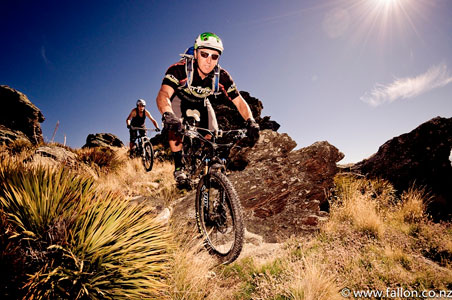 There’s heli-hiking, heli-skiing, and now, heli-biking, which takes on a particularly high-adventure aspect atop the jagged mountain peaks looming high above Queenstown. Fat Tyre Adventures takes mountain bikers out for "fly up, ride down" heli-biking outings, which are typically inclusive of a 15- to 20-minute chopper ride to a mountaintop, followed a multi-hour bike ride back down to the valley floor—some of the "gravity-assisted" trails cover descents of nearly 6,000 feet. An array of remote backcountry tracks span five mountain ranges, running through epic New Zealand scenery inclusive of high country sheep farms, conservation lands, and more. Try the popular Nevis trail, which kicks off from atop the moonlike terrain of the Old Woman Range down into the heart of Pinot Noir wine country (tours start from $330/person).

From the US, flights into Queenstown make connections in major New Zealand airport hubs like Auckland, or through Australian gateways like Sydney. Once you touch down, plan to catch your breath between adventure outings at The Rees Hotel, with 60 polished rooms offering plush king-size beds; high-tech goodies like complimentary WiFi, LCD TVs, and iPod docking stations; and panoramic perches over Lake Wakatipu and the surrounding mountain peaks; rates from $165/night.